Members of the Institute’s Climate Change Working Group discuss what actions are being taken around the world and domestically to achieve net-zero emissions by 2050.

To achieve the Paris Agreement objective of limiting global warming to well below two degrees C, the Intergovernmental Panel on Climate Change (IPCC)[i] showed that it is necessary for us to achieve net zero emissions by 2050. Governments and organisations are setting targets to have net-zero greenhouse gas emissions by 2050 (or earlier). This paper covers both international and domestic settings, firstly looking at COP26 and the actions that some Governments worldwide are taking, then zoning in onto Australian companies and industry groups.

Globally, the energy, agriculture, land-use change, and industrial processes are sectors that generate the highest carbon emissions. These sectors have the greatest scope to reduce carbon emissions. Some sectors of the economy already have technology to bring emissions to zero. Energy providers around the world are transitioning to renewable sources of electricity like solar or wind. Transportation that runs on electricity generated from renewables or nuclear also has zero emissions.

For other industries such as aviation and agriculture CO2 needs to be removed from the atmosphere to offset emissions while green technology is developed. In September 2019, the World Economic Forum and the Energy Transitions Commission launched the Mission Possible Platform to achieve net-zero carbon emissions by 2050 for “hard-to-abate” industries[ii]. The diagram below shows us how. 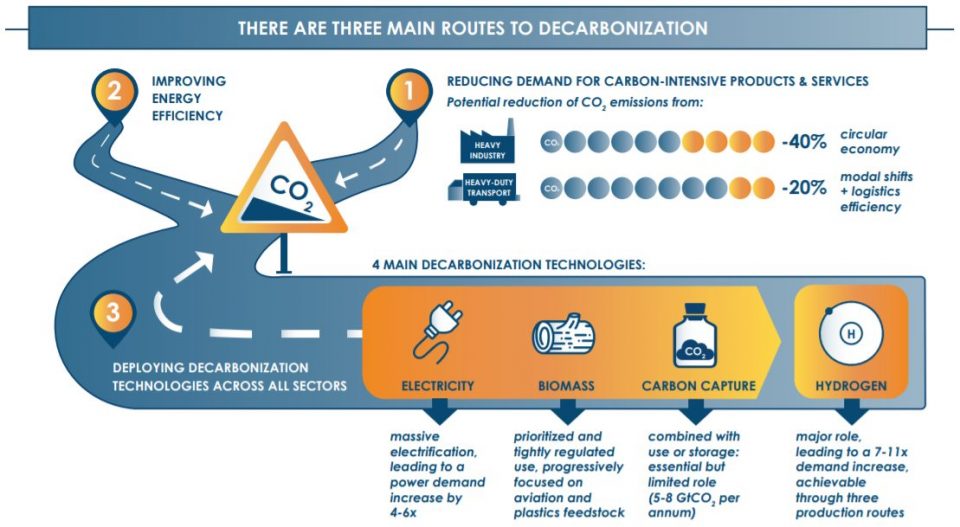 The key focus of the United Nations Climate Change Conference (COP26) is the updated commitments from governments around the world to meet the Paris Target. Net-zero emissions will be a major part of that. COP26, planned to take place in Glasgow in November 2020, has been postponed to 2021 due to COVID-19. Despite this, the host countries (UK and Italy) have demonstrated tangible action in line with the Paris Agreement: committing to net zero emissions by 2050, and agreeing to phase out coal by 2025.

The UK and Italy intend to work with other nations to meet the goals of the Paris Agreement. Particularly, the aims ahead of COP26 include[iii]:

Interestingly, efforts to control the pandemic have reduced economic activity and contributed to improvements in air quality. However, it is too early to assess the implications for concentrations of greenhouse gases, which are responsible for long-term climate change. World Meteorological Organisation Secretary-General Petteri Taalas has repeatedly stressed that the economic and industrial downturn as a result of the pandemic is not a substitute for concerted and coordinated climate action.

“Past experience suggests that greenhouse gas emission declines during economic crises are followed by a rapid upsurge. We need to change that trajectory.”
— WMO Secretary-General Petteri Taalas

What are governments doing?

A number of countries have committed to targets for reaching net-zero emissions on timescales compatible with the Paris Agreement temperature goals. Analysis by the Energy and Climate Intelligence Unit (ECIU) showed that 17 countries, 11 states and regions, and at least 23 cities have set net-zero emission targets. The combined annual GDP of these is around $13.7 trillion – 16% of the global economy. 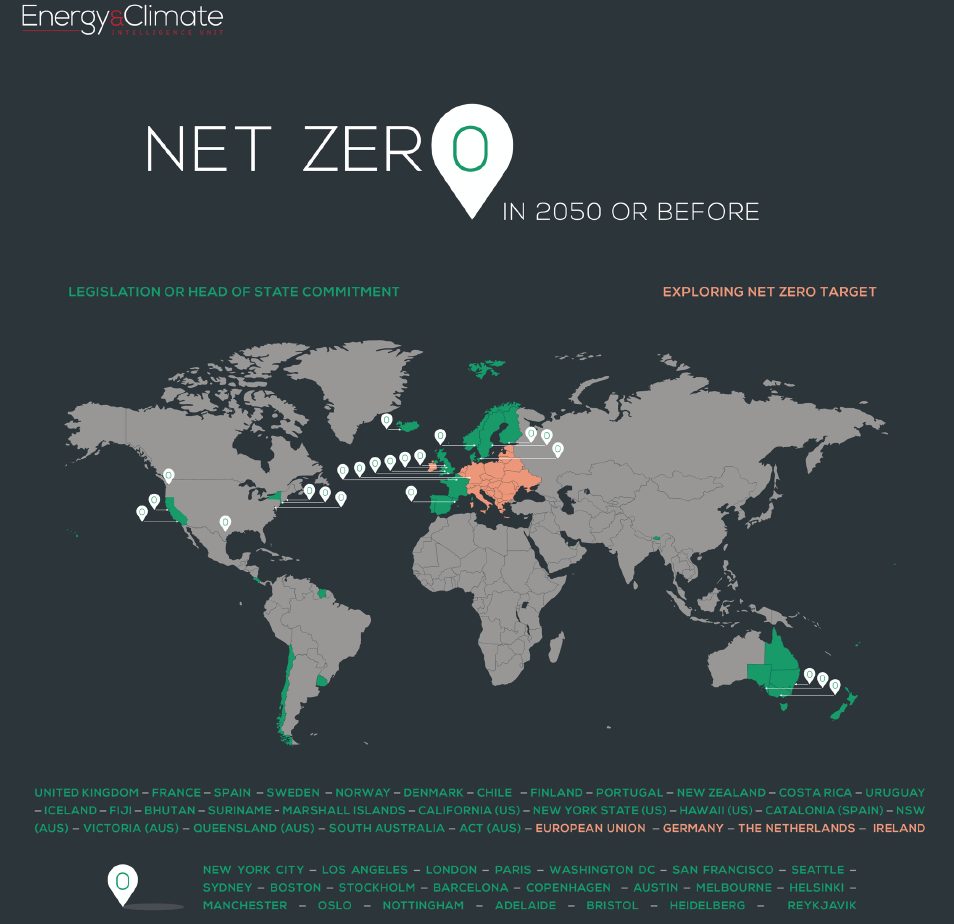 Examples of government actions to achieve their net-zero targets include:

What are companies doing?

Businesses and business groups are also developing plans to target net-zero emissions by 2050.

In February 2020, BP pledged to achieve net zero emissions in its operations and to push for action within the broader industry. The company has also withdrawn from trade associations that hold incompatible positions on climate action. A few other global oil and gas companies have also made commitment to have net zero emissions at an operational level. These targets generally exclude downstream emissions – emissions from the products sold by these companies, which are fossil fuels. These are called Scope 3 emissions, under the Greenhouse Gas Protocol Corporate Standard. Though the oil and gas industry faces many challenges and criticisms during its transition to net zero, it was encouraging that the Energy Institute, which organises International Petroleum Week, made the headline theme ‘Defining the industry’s role, delivering a low carbon future’.

From an investment point of view, policymakers are pushing investors to do more to ensure their portfolio choices help to meet the net zero target. Part of the answer is a “temperature score” that gives investors a snapshot of how their investments are contributing to climate change. France is leading the way with 18 firms, including insurer AXA and reinsurer Scor, disclosing the temperature score of their portfolios in 2018. British regulators have flagged that they could require some banks and insurers to report temperature scores from 2021 in annual portfolio stress tests.

As investors and capital providers, banks influence emissions in two ways: directly through their operations, such as energy use in offices and branches; and indirectly through their investments, products and services. Setting targets to align emissions associated with bank investment and lending portfolios with net zero before 2050 is critical, as banks play an important role in shifting funds to low-carbon activities to achieve the Paris Climate Agreement goals. The Net Zero Momentum Tracker for the Banking Sector reported that most Australian banks have made varied commitments to reduce a portion of financed emissions, such as excluding new thermal coal investments, but none have set whole-of-portfolio targets.

In 2017, Meat and Livestock Australia (MLA) announced a carbon-neutral plan (CN30). MLA is currently working with individual producers to provide examples of current carbon balances and to determine which approaches to adopt to close the carbon balance to neutral. Some of the actions taken by local producers include planting trees and changing the feed source to seaweed and algae to reduce methane production.

There is widespread support in the business community for a legislated target of net zero emissions, including support from the Business Council of Australia. Prominent business leaders are specifically backing Independent MP Zali Stegall’s emissions plan, which was due to be discussed in parliament in March this year but has been delayed due to coronavirus disruption.

Domestically, policy uncertainty at the Federal level is a significant barrier to the development of emissions strategies for businesses, as well as for state governments. Every state and territory in Australia has committed to some kind of net zero emissions policy. However, there is no federal commitment to this emissions target, and there is no certainty on federal financial incentives for emission reduction, such as a national carbon price.

Business leaders are pushing the government to legislate emissions targets as early as possible to reduce transition risks. Transition risks include the uncertainty of employment for workers in legacy industries and investment volatility.

For businesses and investors, another barrier to developing emissions policies is the measurement of emissions. Many new measures for climate risk disclosure are still in development and are voluntary to implement. Climate risks and downstream emissions from businesses are understandably difficult to measure consistently and report on reliably between businesses and industries.

Finally, reaching a global net-zero emissions target requires global cooperation. This is unsurprising given the issue spans across all nations and involves multiple generations. It is therefore important to create positive coalitions for change and forging agreements amongst nations to act now for benefits later.

The move to a zero-carbon economy is not a small or easy one, but it is necessary in light of the risks and challenges that a changing climate poses. Despite material barriers and uncertainties, governments and companies globally have committed to making changes to achieve net zero emissions. Next year, we will see the focal point of the COP26 on achieving net zero emissions by 2050, on the path to achieving the goals of the Paris Agreement.

Other climate change articles published by members (past and present) of the CCWG:

Michelle is a qualified actuary working in actuarial consulting at Deloitte. She has previously worked in life insurance pricing, valuation, capital, and R&D roles, Michelle is passionate about understanding the broader impacts of climate change, particularly on life and health, and roles that actuaries can play in forming solutions. She is a member of the Institute’s Climate Change Working Group and the COVID-19 Working Group, and has contributed to major publications and information notes.

Alex is an Investment Analyst at Future Super, an ethical superannuation fund with a focus on divestment from fossil fuels. He has also worked in consulting for the life insurance and superannuation industries. He has a particular interest in ESG and impact investment, and is a member of the Actuaries' Institute Climate Change Working Group.