Actuaries will be increasingly called upon to communicate climate risks in financial institutions, with growing regulatory and financial reporting focus on climate risks, and in so doing will be faced with such disparity of views from the Board down.

The 2017 Taskforce on Climate-related Financial Disclosure report is driving company level understanding of climate risk. Further, APRA and ASIC have stated that climate-related physical and economic transition risks are foreseeable and material financial risks and company directors should address these alongside all other financial risks.

The challenge for actuaries is how best to communicate the risks associated with climate change and how to tackle biases in understanding those risks.

The Actuaries Institute’s Public Policy Statement on the Economic Implications of Climate Change was based on the 2014 report of the Intergovernmental Panel on Climate Change (IPCC).[1]

More recently The IPCC issued a Report in October 2018 in response to a decision to adopt the Paris Agreement at the 21st Conference of Parties of the UN Framework Convention on Climate Change in 2015.[2]  The Report represents an effort to set a global target of 1.5°C in global mean temperatures, rather than a 2°C rise.

Ramifications of the Report’s advice are, even now, often lost in the media and distorted in political debate.

So, let’s directly explore the Report and reiterate its advice:

Notably, the Report walks a fine tightrope between instilling a positive attitude to mobilise action and a resigned despondency.

Importantly, it integrates analysis of the confidence and uncertainties surrounding each of its findings. Unpacking that uncertainty often reveals a more concerning view. 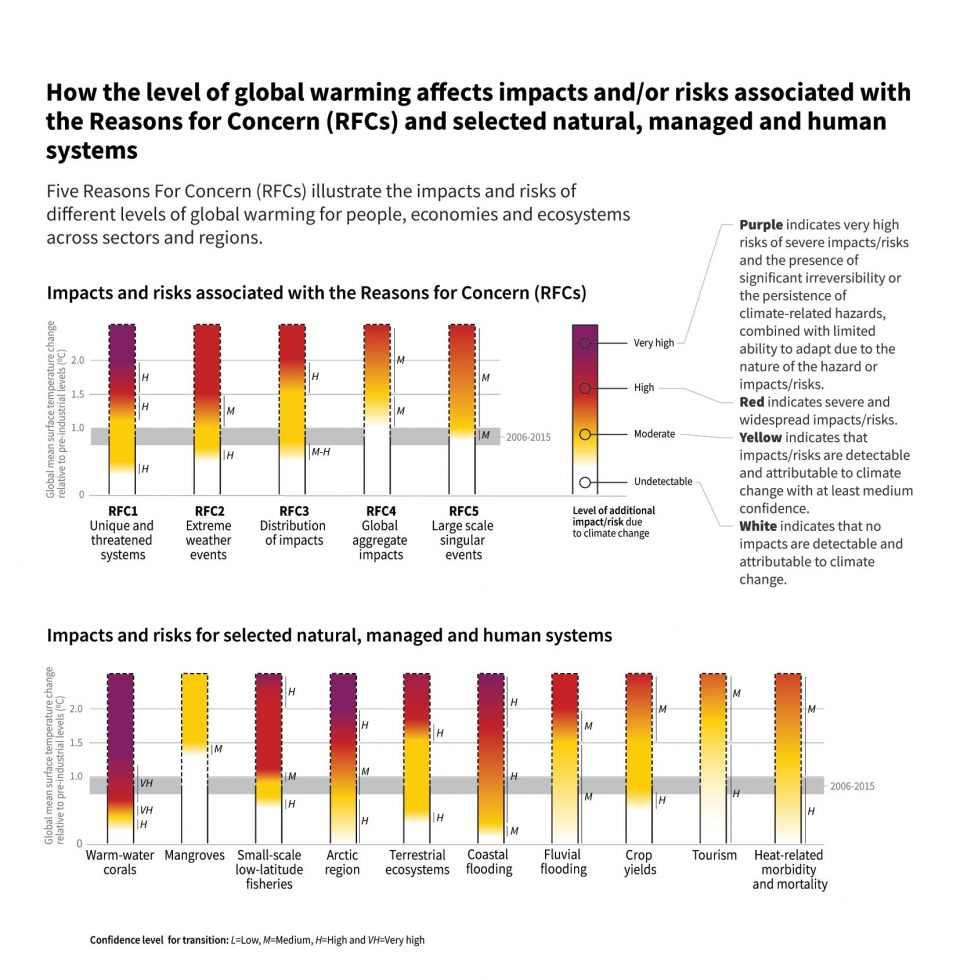 It is worth observing from the chart above how rapidly the severe impacts and risks arise for our planet when warming approaches 1.5°-2°C.

This is reinforced by the 2019 CRO Forum which highlights that, for actuaries working in insurance, warming greater than 2°C represents a real challenge to the sustainability of our business model. [5]

If one accepts that it is imperative to avoid the consequences of global warming above 2°C and that we should instead limit warming to 1.5°C the speed of action required boils down to four questions that go to the heart of the risks we face, as addressed in the Report.

1. If we don’t accelerate action, what is the chance of keeping warming below 2°C by 2100?

The Report states that “Pathways reflecting current nationally stated mitigation ambition until 2030 are broadly consistent with cost-effective pathways that result in a global warming of about 3°C by 2100, with warming continuing afterwards (medium confidence).”[6]

In practice, this means that Australia meeting its stated commitment to reduce emissions to 26% below 2005 levels by 2030, in conjunction with other nations’ ambitions, is inconsistent with a collective effort to keep warming below 2°C.[7]

Note the statement’s bold assumption that every country successfully executes on its ambition.  In reality, the current state of government action around the world is nowhere even close to a position where we can avoid 2°C warming.

We often hear media interpretations that we have 10-15 years to act to keep warming below 1.5°C.  The Report says something very different.

It concludes that “global warming is likely to reach 1.5°C between 2030 and 2052 if it continues to increase at the current rate”.[8]  A key point here is that by “likely” the IPCC means that there is a greater than 66% chance of this estimate being right.[9] That is, there is a sizeable chance (up to 33%) that the estimate is wrong.

The Report concludes that global warming to date has a “…likely range of 0.8°C to 1.2°C” above pre-industrial levels”[10] (with an up to 33% chance of being outside this range).

However, it also states that Anthropogenic Emissions to date “alone are unlikely to cause global warming of 1.5°C (medium confidence)”.  By “unlikely” the IPCC means there is up to a 33% chance that warming is already locked in at 1.5°C![11].  While the IPCC’s confidence level should be noted, the IPCC is actually advising that there is a non-trivial chance that we will fail to keep warming below 1.5°C even if we act now.

To emphasise how little time there is to act, the Report observes that “every year’s delay before initiating emission reductions decreases by approximately two years the remaining time available to reach zero emissions on a pathway still remaining below 1.5°C”.[12]

3. Even if we successfully take accelerated action as advised by the IPCC, what is the chance of keeping warming below 1.5°C by 2100?

Even if the scale of action proposed by the Report is implemented to keep warming below 1.5°C there is up to a 50% chance of warming exceeding 1.5°C.[13]

Stylised paths of unprecedented action to achieve Net Zero C02 emissions by either 2040 or 2055 are provided with an expectation of keeping warming to 1.5°C in 2100.[14]  However, these paths show that even if we take recommended actions there is an outer chance that warming could reach between 1.75°C and 2°C even during many of our lifetimes, leave alone our grandchildren’s.

4. What is the chance that we can achieve the IPCC’s recommended action?

This is a matter of political and community will.  The Report confronts us with a frightful reality check.

First, there is no documented historic precedent for the scale and rates of system changes required at a global level to limit warming to 1.5°C (medium confidence).[15]

Second, if one is relying on Carbon Dioxide Removal (CDR) to reverse an overshoot of 1.5°C then be wary, since current understanding is “limited about the effectiveness of net negative emissions to reduce temperatures after they peak”[16].

Also bear in mind, it has been over 30 years since scientists have warned to avoid warming greater than 2°C and yet global emissions are still rising and the global response has been haphazard.[17]

One glance at the IPCC’s recommended path to net zero emissions by between 2040 and 2055 in the chart below and the urgent need for joint and individual action becomes starkly apparent.  In hindsight, one could say the world has already utilised 50%-75% of the available time to act without success.

In summary, the science, as presented by the IPCC, is telling us there are non-trivial, possibly material, chances of not keeping warming below 1.5°C, let alone 2°C even if we run at the problem with the urgency of a space race.

Throw in uncertain climate feedback loops, impediments on the path of technological innovation and commercialisation and political disagreement and the perception of the real risk is sharpened.[18]

Given the IPCC’s advice, how can actuaries deliver a better understanding of the risks of climate change, professionally and in public discourse?

Climate change risks are the result of scientifically observed systemic physical processes with ubiquitous effect on all life.  There are uncertainties in measurement and predictions, but physical processes will reach their logical conclusion notwithstanding our incomplete understanding currently.

This is not like a random insurance risk, a business bet or an engineering risk.  In such cases if something goes wrong either the few are supported by the many or only the risk taker loses, so that the impact is localised, or else society is organised to be resilient.

The nature of climate change risk qualitatively differs in that the worst consequences of climate change will highly likely be absolute, irreversible, extensive and possibly inevitable if rapid action is not taken.  This lends itself to looking at the risk as analogous to a difficult life or death decision, but this framing doesn’t do justice to the collective and systemic nature of the risk.

The challenge for actuaries is how to use their expertise in the communication of risk to guide others so they have a proper understanding of the risks and consequences of climate change and avoid poor decisions.

For example, in a conversation about “costs and benefits”, as measured in econometric models that are limited by the parameters of that model, will we fail to see the “black swan” consequences of runaway climate change?

If the focus is on the investment risk in savings pools, might we unwittingly reduce the problem to picking winning and losing industries and miss the bigger picture of a net loss in the total quality and viability of existence?  For example, a portfolio investment in resilient crops may be a winner in a warming world, but that may not prevent whole regions, communities and ecosystems becoming less viable due to drought, say.

However one might communicate climate risks, the understanding should be conveyed that if the anticipated consequences eventuate, there is likely no turning back.

The opportunity and challenge for actuaries is clear.  The time is ripe.

[6] SPM D.1.1.  Note that the national ambitions referred to here are as at the date of the Report.

Sarosh is a member of the Institute’s Climate Change Working Group. He is an Actuary with a career spanning insurance, project finance and investment consulting and previously spent several years on the Board of a major university. He has worked in Australia and India. In addition to his Actuarial qualifications he holds a Master’s in International Studies, and a Stanford Graduate Certificate in Management Science & Engineering focussed on Dynamic Strategy & Organisational Behaviour.

It can be difficult to write about this topic. I feel you did an superb job though! Thanks for this!

Under the Spotlight – Jessica Cong