by James Yap and Evelyn Yong

This edition of the Climate Change Blog attends to the devastating effects of the recent bushfires and highlights the severity of human caused climate change on the nation’s seasons.

As of the 9 January 2020, bushfires have been burning across Australia for multiple weeks. The BBC states that 24 people have died, with over 6.3 million hectares of bush, forest and parks burned.

In NSW, nearly five million hectares of land has been affected by fire, with 1,300 homes destroyed and thousands forced to seek shelter elsewhere. There were 130 fires burning across NSW as of Monday 6 January, which have subsequently fallen to 111. The town of Balmoral was largely destroyed, and a state of emergency is in force with parks, trails and camping grounds closed and holiday makers asked to leave a large stretch of the coast.

In VIC, over 0.8 million hectares have burned, with a close call for the town of Mallacoota, with residents and tourists fleeing to the beach and then being evacuated by the Australian navy. A state of disaster has been declared in VIC.

Smoke from bushfires have affected locations as far as New Zealand, with Canberra being listed by the Swiss group AirVisual as the third worst of all global capital cities on Friday 3 January.

This is a tragedy, and the cost to people’s lives and natural habitats could resound for decades.

What do the statistics say?

“… it is important to get an objective view on climate patterns. The Australian Actuaries Climate Index clearly shows extreme weather is happening more often”

Winter 2019 was the seventh consecutive winter to show extreme high temperatures that exceeded those of the reference period. Figure 1 shows the proportion of the last 20 seasons (five years) that have been above average. Most of the country has experienced above average extreme high temperatures for much of that time. Some parts of NSW have not experienced a single season below the reference period average in the past four years.

Figure 1: Percentage of Above Baselines Seasons in Past 20 (High Temperature) 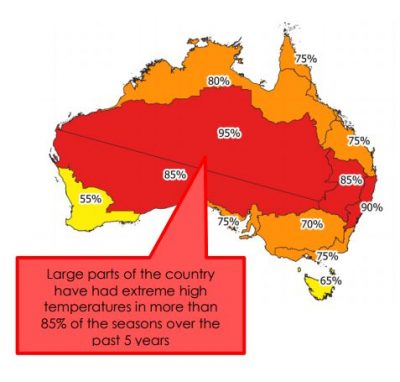 The Consecutive Dry Days Index shows that the extremes (red bars in Figure 2) correspond with the number of homes and lives impacted by bushfires in Australia (in BBC’s infographics, Figure 3). Cross-referencing with BBC’s infographics, we see both the climate extremes and houses destroyed showing up in years 1983, 1994, 2003 to 2009, and post-2017. 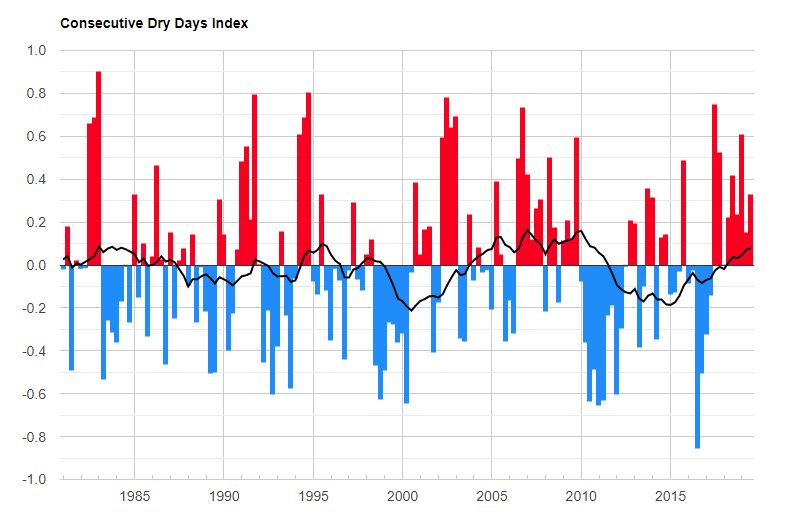 What does this mean in the context of climate change?

The impact of climate change, and particularly human caused climate change, is difficult to separate out from the natural variation in weather that you might expect to see year on year, or even over multiyear cycles such as the El Nino or Indian Ocean Dipole effects. It makes intuitive sense that a long-term climate trend would affect weather conditions contributing to bushfires, but the extent of this contribution is not easy to quantify.

Joëlle Gergis’s Sunburnt Country: The History and Future of Climate Change In Australia, noted that the most common approach to assessing the link between individual events is to calculate the likelihood of events that occur using models including and excluding additional greenhouse gases from human activities. This is known as ‘Detection and Attribution’, where detection is identifying a signal from background noise that demonstrates that the climate has changed by more than expected from natural variability, and attribution is the process to establish the most likely physical causes of a detected change.

“Models show that the global climate is no longer only being influenced by natural variability. It is extremely likely that human activities are the dominant cause of the observed warming since the 1950s”

Joëlle also identified that “the warmest thirty-year period in the last 1,000 years occurred between 1985 and 2014”, and that “the observed post-1950 warming does not arise solely as a result of natural variability. The increase is nearly three times what you’d expect from natural variability alone”.

In the 1960s, the Forest Fire Danger Index (FFDI) was developed to assess the danger of fire in Australian forests. It incorporated key drivers for fires, for example rainfall, evaporation, wind speed, temperature and humidity, to provide a scale from 0 to 100+ on the level of fire danger, rating it from low-moderate (0-11) to catastrophic (100+). Notably, the maximum fire danger rating was originally set to 100, based on the Black Friday fires of 1939, but the catastrophic rating was added following the Black Saturday fires of 2009, which reached much higher than the supposed maximum. In the catastrophic category, fires are expected to spread quickly enough to be a critical threat to life and safety. 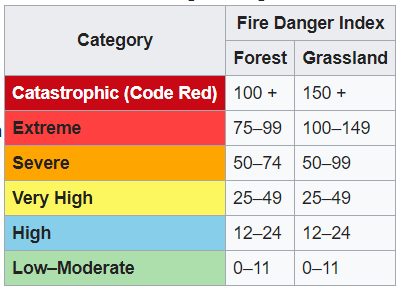 A peer reviewed study, led by University of New South Wales climate scientist Dr Sophie Lewis, has built on the FFDI data and key drivers to assess the influence of extra greenhouse gases in the atmosphere on a bushfire event, using the November 2018 North Queensland bushfires as the event. These fires resulted in 1,250 fires burning 1.4m hectares, along with nine homes destroyed and widespread impacts in the agricultural industry.

Dr. Lewis identified in her paper that this bushfire was four times more likely to happen as a result of human caused climate change. The 2018 heatwave event “was more severe and persistent” than previous examples, with “no events of this scale previously occurring at such northerly locations”.

Unprecedented events such as this means greater danger, as firefighting preparation and training cannot rely on previous events as a guide on what the most dangerous conditions that they may expect are.

The Bureau of Meteorology just declared 2019 the warmest and driest year on record for Australia, calling out much higher maximum temperatures as well as the lowest total rainfall ever recorded. This begs the question of what future catastrophic events may look like, and how effective our measures to address them will be.

The Actuaries Institute recently made a submission to the ACCC on its Northern Australia Insurance Inquiry – Second Update Report, which said in part:

“Climate change is likely to trigger further changes in risk understanding, which may mean the market disruption issue will be with us for some time. Long-term consideration of climate change is essential. In particular, the implications of climate change need to be considered in building code, land use and infrastructure investment decisions.”

The insurance industry is also calling for concerted action to mitigate the impact of climate change, with the insurance bill breaching $700m and expected to increase as more claims are lodged.

Some questions we may ask ourselves:

Some useful collations of attribution studies are available at:

Other climate change articles published by members of the Climate Change Working Group:

Smoke Kills – So Why Aren’t We Counting It?