In the 124-year history of the Actuaries Institute, only four actuaries have been honoured with an Institute medal. In December 2021, Ian Laughlin (BSc, FIAA, FIA, CERA, FAICD) has become the fifth, receiving the Gold Medal.

Institute President Jefferson Gibbs said the award “recognises Ian’s more than four decades of outstanding work in the service of the community, the profession, business, and government.”

Here’s a look at the man behind the medal. 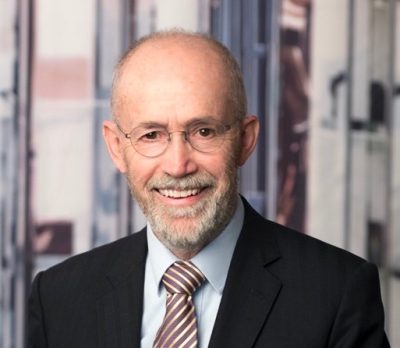 In the early 1980s, when every desk in the National Mutual office had a paper calendar but none a flashing screen, Ian Laughlin bought a microcomputer from Dick Smith and lugged it into the office. Eschewing the secretarial pool, he did his own memos and printing, because he’s “always had the urge to find a better way.”

Whether in corporate life, in the realm of policy or as an actuary, Ian Laughlin has always found a better way. He’s been a member of Council, was Actuary of the Year in 2018, a member of the international committee that set the CERA syllabus and part of the COVID-19 Working Group. He was Deputy Chairman of APRA and served on the Financial Reporting Council and with the Administrative Appeals Tribunal.

Ian is a Distinguished Fellow of the International Association of Insurance Supervisors.

That’s a long list of achievements and yet Council Senior Vice President, Annette King (Convenor of the Nominations Committee which advises Council on awards), said Ian was speechless when she rang him to tell him the news of his Gold Medal award. Pushed for the key to his successful career he cites that restless quest for better, but also the good luck to have a broad range of roles early in his career.

“National Mutual encouraged us to work outside the actuarial department, so I was servicing superannuation clients, working in sales support and managerial roles,” says Ian.

“I ended up managing some very complex businesses – including AMP in the UK when it was under great stress – and as a result got very interested in risk management.”

That interest in risk management was a theme throughout his career and for a number of years, he led the Risk Management Practice Committee. But Ian was always looking at the concept of risk in a broader way. “We don’t live in a stable and consistent world, everything is ever-changing – and at a faster rate,” he says.

This idea – that the profession and the financial services industry needed to look more widely at risk – informed two deeply influential Dialogues [1] on social risk, written in the aftermath of the Royal Commission. “Look back and you don’t see what’s happening in front of you,” says Ian, who took these ideas and more on the road in 2019 for a series of professionalism-focused Actuaries Institute Leadership Forums in Australia and Asia, post-Royal Commission.

“We all need to understand the environmental and social changes around us to understand the risks coming our way. Look at social attitudes to mental health – they’ve changed dramatically, and we see that reflected in disability claims that were not on the radar 20 years ago. I was trying to get boards and others to think about social attitudes and how they might influence business and risk management.”

As Institute CEO Elayne Grace puts it, ”Ian’s strength is the breadth of his thinking. He’s had a distinguished corporate career, leading businesses as a Chair and MD, but he’s always seen the bigger picture of industry and community, which is why he’s been equally influential in his roles as a regulator and as a global leader in the actuarial profession.”

Ian’s influencing skills were on display in his leadership around the IFRS 17 accounting standard. Asked to head a Taskforce to prepare the profession and industry and to ensure a consistent approach for life, general and health insurance, Ian displayed a gift for getting people to work together.

Ian says the Taskforce’s achievements highlights a unique strength of the local profession. “The volunteer ethic amongst actuaries in Australia is quite extraordinary,” he says. “You can draw on highly skilled people to get good work done. With IFRS – and disability insurance – we tapped into that and delivered industry-changing work.”

President Jefferson Gibbs believes Ian’s work with the Disability Insurance Taskforce to make this socially important insurance economically viable may be Ian’s crowning achievement. After leaving APRA and his board roles, he was involved in leading, not just the profession but the industry, in grappling with a problem that was affecting insurers and business and also exposing customers to unsatisfactory outcomes. “Doing the right thing by the customer has always been in his DNA,” says Jefferson.

According to Ian, the Actuaries Institute Gold Medal[2] is an extraordinary honour, but he feels he owes the profession much more than it owes him.