In this Normal Deviance column, to celebrate the current World Chess Championship, Hugh Miller hunts through his recent online chess performance for evidence of performance rising and falling from day to day. Full data and code are available for those interested.

I occasionally stay up late – sometimes this is for a crunch deadline at work, other times forced by a child that refuses to have a full night’s sleep. However, one thing that’s never been clear to me is how this affects my performance the next day.

Happily, I now have a way of testing this (albeit under a very narrow definition of mental performance). Throughout the most recent Sydney COVID-19 lockdown, I’ve played a lot of (probably too much) blitz chess online. As I’ve played, it’s certainly felt like my performance has varied day-to-day; sometimes I’ll have a run of wins and other times a series of losses that suggest maybe I should get some rest. Looking at this data gives the opportunity to test some of this formally.

Datasets were downloaded from chess.com using their API. I also have a timesheet tracker that tells me if I was using my computer late – and have derived an indicator variable for this. For interested readers, the full (suitably rough) R code is available here.

Figure 1: One of my less terrible games of chess

Figure 2: Examples of daily results. Do they indicate daily ups and downs?

The dataset is about 600 games (almost all 3-minute-a-side blitz chess) over a two-month period. After discarding draws (there aren’t many in blitz chess) we are modelling a 0-1 response, with a positive response indicating a win for me. I’ve done a few things to unpack the data and look for evidence of day-to-day variability:

Figure 2: Actual log-likelihood score against bootstrap random replications. A strong clustering pattern would see the actual lie to the far left of the distribution. 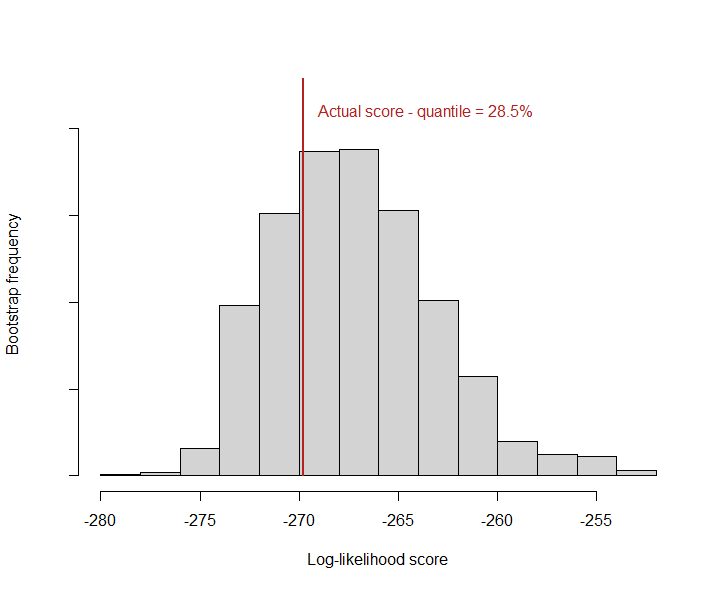 Despite looking hard, it looks like overall performance does not show evidence of day-to-day variability. This genuinely surprised me; I may have been the victim of confirmation bias, believe that those odd days or streaks where I see poor performance when tired incorrectly indicate a deeper truth. And it is a reminder that streaks of wins and losses are expected to happen by chance (an effect that led to Apple deciding to make its shuffle feature less random).

Hopefully, the analysis description also demonstrates there are a few ways of looking at the same idea through different forms of statistical analysis. The fact that they’re pretty consistent is an encouraging sign.

There are some caveats, as ever. My rating does rise and fall with results and the chess server attempts to find good matches for that; so even if my performance was truly worse on a given day, a lower rating would then lead to easier games and a better chance of winning.

I don’t think the findings mean I can get away without enough sleep. But at least it suggests it won’t kill my Chess.com rating.

When the algorithm fails to make the grade