The Actuaries Institute’s Retirement Income Working Group (RIWG) are collaborating with Plan for Life to collect data on drawdowns. Anthony Asher, Convenor of the RIWG, details the key components of this collaboration, and how you could get involved.

If you are interested in data and the digital economy, so is Australia’s Treasury. In August, Treasury were consulting on:

Forcing data to be shared is not Pareto efficient. Those who have it often resist sharing it because they see a competitive advantage. But data shared is not data lost, and our modern standard of living is based in no small part on shared data – particularly when transformed into technology.

The CDR is premised firstly on the right of people to know what data organisations hold on them. But it also assumes that markets will be more efficient if participants have better information. It does seem self–evident that competition to keep data secret will slow more productive types of competition. In particular, it benefits incumbents at the cost of new entrants.

Actuaries have been leaders in the collation of data for almost 200 years, and the members of the profession have been active in persuading companies to share data when it is in the public interest.

The UK profession publishes Continuous Mortality Investigation Reports, which continue work that goes back to the first investigation published in 1843, based on the combined experience of 17 offices up to 1837. The 1956 Transactions of the Actuarial Society of Australasia reports on what seems to have been the first Australian mortality investigation. Much of the data collection was done manually, but the calculations were done on the British Tabulating Machine Company’s electronic computer! The 1956 Transactions also report on marriage rates, which were at that time important for defined pension fund benefits.

For purposes of the Retirement Income Covenant, Treasury is suggesting that trustees survey their members about their assets and liabilities outside their superannuation fund, as well as intended retirement ages. Whether a member is part of a couple or not is still relevant.

The Actuaries Institute’s Retirement Income Working Group (RIWG) believes that one critical set of data that would be particularly useful is longitudinal data on members in drawdown phase; rates of drawdown, ad hoc lump sum withdrawals, balance exhaustion, and death. Such data will help:

The RIWG has been working with Plan for Life to collect data from superannuation funds on the drawdown pattern of their ABPs since 2013. We collected data in 2016 that has been analysed in some detail by Igor Balnozan in his Honours and PhD research.

Igor found significant heterogeneity in drawdown behaviour over time and finds that the patterns can be clustered into seven groups. The graph below maps the drawdowns of those who retired before 2004 and were in the study until 2015. Group 5 reduced their drawdowns to the new minima allowed after the 2008 Global Financial . Group 7, on the other hand, had not reduced the amounts that they are drawing and will likely run out of money at some point. Groups 4 and 6 have reduced their drawdown amounts (in 2010 and 2013 respectively) to protect their balances. This data suggests that trustees might provide projections to groups 3, 6 and 7 about the implications of their high rates of withdrawal. 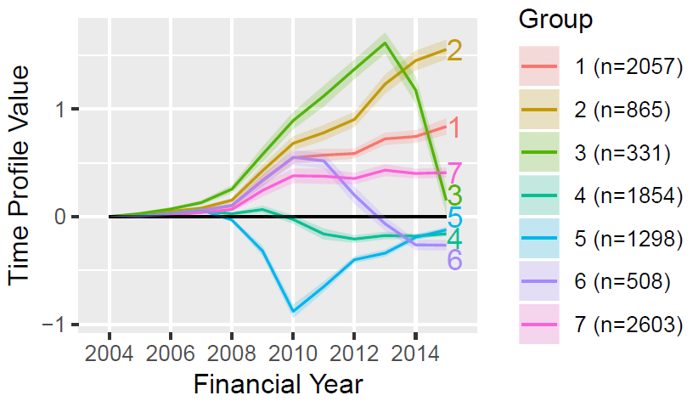 We are now collecting a second round of longitudinal data for the past eight years to try to get a better understanding of recent drawdown behaviour from as many funds as possible.

Given that there is no obligation to participate, we need help to persuade trustees to participate. It is not expensive, and it is a shame to live in a world where we have such powerful data analytic techniques and limited data on which to use them. The draft wording of the Retirement Income Covenants requires trustees “to take reasonable steps to gather the information necessary to inform the formulation and review of the strategy”. Can they do this without better information about how retirees are actually drawing down their accounts?

If anyone reading this article has some influence with the trustees of a particular fund, and are not part of the various Institute initiatives through which it is promoted, please contact me, or at least exercise that influence for the public good.

What is an investment-linked annuity?

An approach to having it all in retirement