Despite another week of record COVID-19 numbers globally, acceleration of the outbreak seems to be slowing while in Australia, Victoria appears to be past the ‘peak’. Sadly, New Zealand’s surprise outbreak remains unexplained. Russia approved a vaccine despite no Phase Three trials, while in the UK, modellers estimate that mortality and morbidity would have been at least three times higher without a lockdown, even after allowing for all the health effects of lockdown and a lockdown-induced recession. 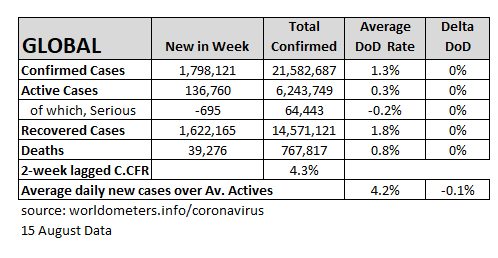 There were record new cases again this week, but in a positive sign, the rate at which new cases are growing fell for a second week in a row to 1.3%.

A very concerning development is the as-yet unexplained outbreak in otherwise COVID-free New Zealand, and the possibility that the virus can persist on surfaces longer than anticipated. This would significantly increase the challenge of controlling the virus’ spread.

Regional Victoria recorded 117 new cases this week, down from 228 last week.  There have been some sizable clusters in regional Victoria, and the reduction in numbers reflects those clusters coming under control.

Victoria recorded 100 deaths this week, up from 86 last week.  Of those, 73 deaths were associated with outbreaks in aged care.

NSW recorded 75 locally acquired cases this week (69 last week).  These were made up of:

No other state/territory reported any locally acquired cases this week, noting the scare in South Australia associated with the Thebarton College cluster has passed (all contacts were released from hotel quarantine on Saturday).