The COVID-19 Mortality Working Group has examined the latest provisional mortality statistics to 31 December 2021, released by the Australian Bureau of Statistics (ABS) on 30 March 2022. We have compared our predicted baseline number of deaths to observed deaths, noting that our detailed analysis by cause of death is based on data for doctor-certified deaths only (excluding roughly 12% of all deaths that are certified by the coroner).

It is important to note that expected deaths are increasing faster from demographic changes (ageing and population size) than they are reducing due to mortality improvement. As a result, our model predicts higher deaths in each successive year. Our prediction for 2021 is higher than for 2020 and both are higher than the 2015-19 average. Thus, despite the overall mortality improvements, our predicted doctor-certified deaths for 2021 are 7,800 (6%) above the 2015-19 average.

The graph and table below summarise the results of the analysis. This article concentrates on the experience in 2021, but we have also shown the 2020 results (scaled to 2021 in the graphs) for context. 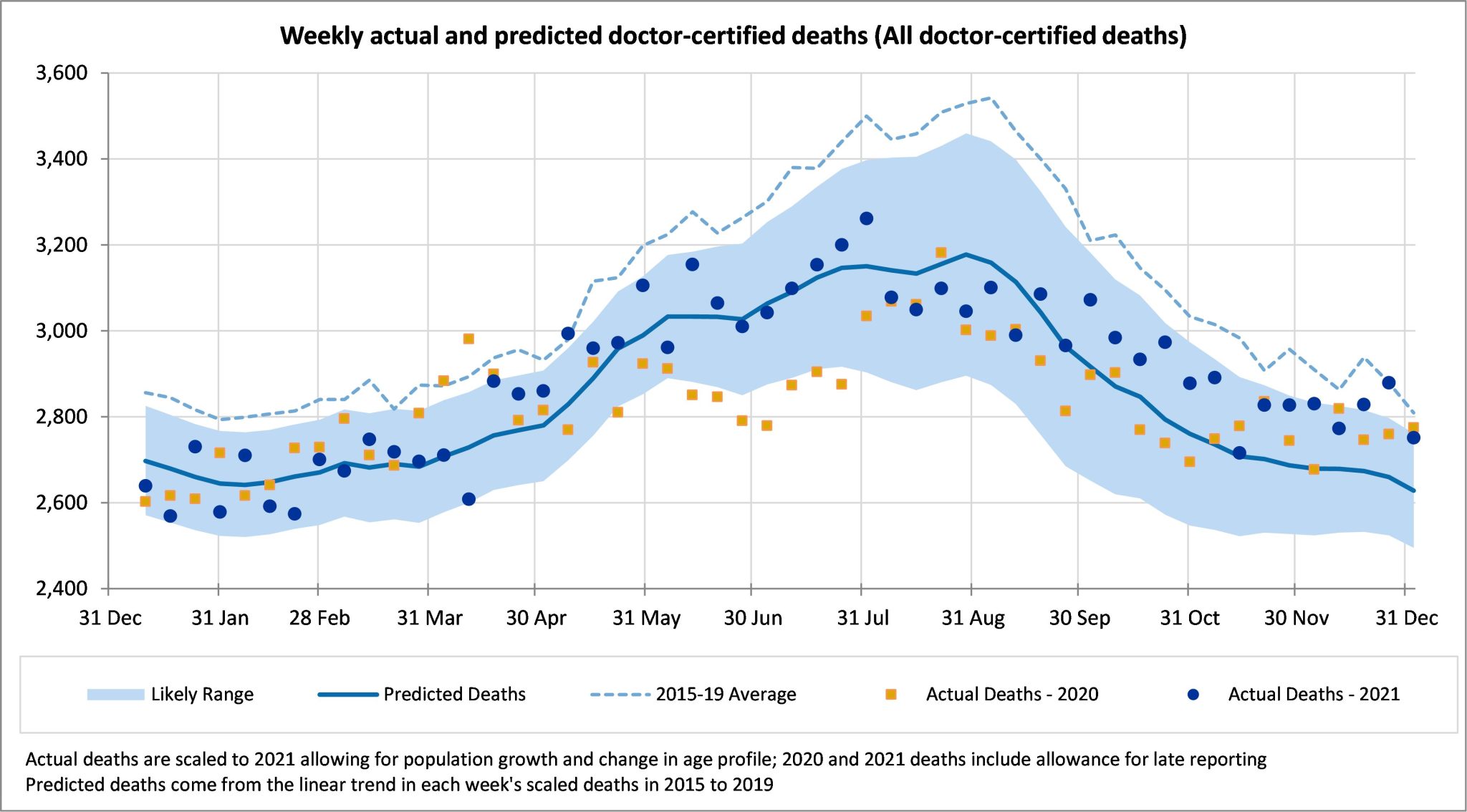 For the month of December 2021, total doctor-certified deaths were 5% (or 600) higher than predicted. Deaths in four of the last five weeks of the year were at or above the upper end of the prediction interval (i.e. above the 97.5th percentile). By cause:

In the full year of 2021, doctor-certified deaths from all causes were around 2,000 (1%) higher than predicted, noting that this is not outside the prediction interval for the year across all causes of death. However, by cause:

The following table shows our estimate of excess deaths for 2020 and 2021 in respect of ALL deaths assuming that:

While the ABS provisional mortality statistics data is only available until the end of December 2021, the officially recorded COVID-19 deaths are available daily. The following graph shows the number of such deaths in each month of 2020, 2021 and the first three months of 2022.

On 31 March, NSW Health released a report that detailed the outcomes of a reconciliation between their daily death counts and data held by Births, Deaths and Marriages (which is the basis of the ABS data). This reconciliation identified 331 deaths that had not been captured in the daily counts. We have shown these deaths separately. 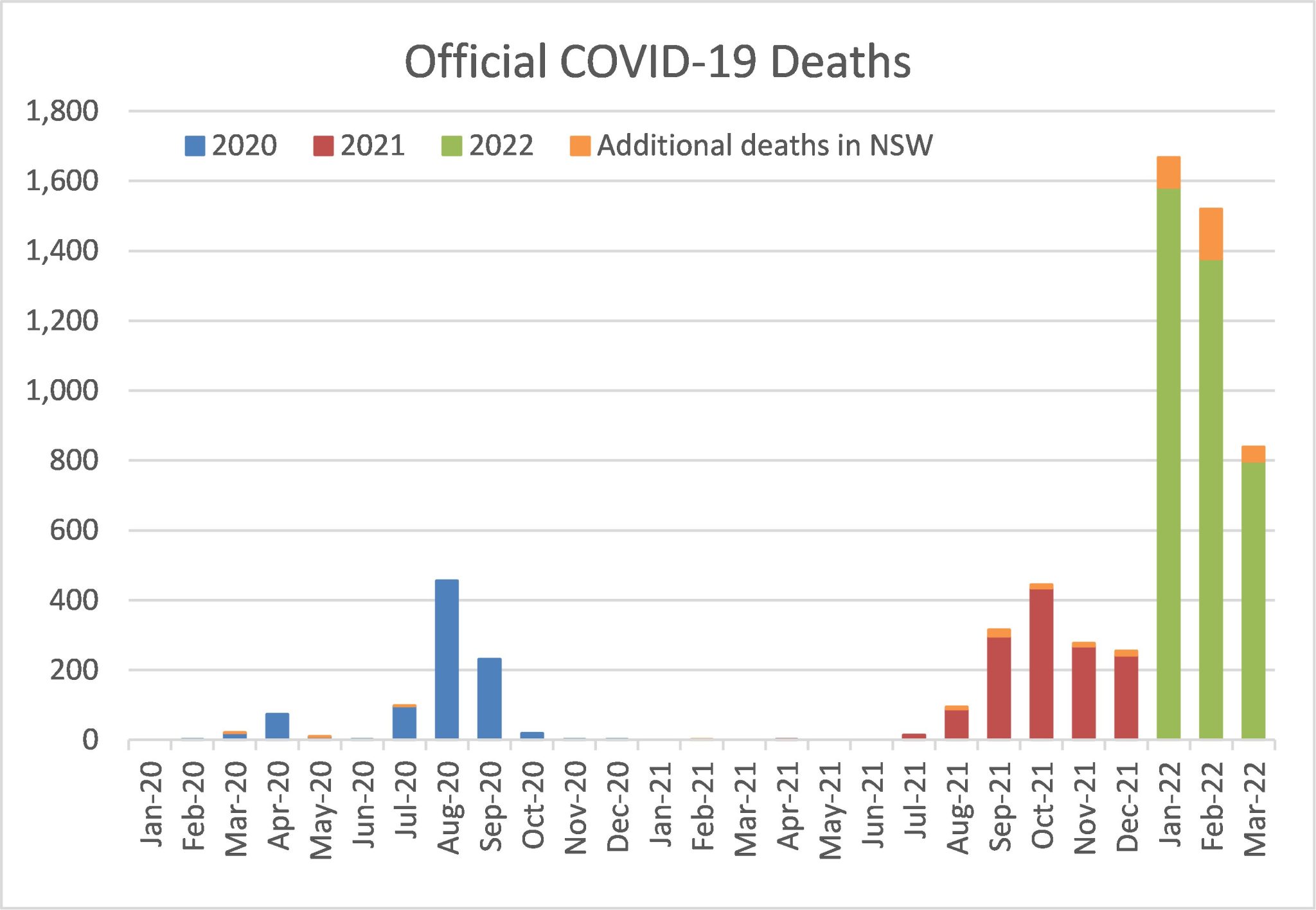 The ABS report Australian COVID-19 Mortality released on 16 March 2021 showed that since the Omicron wave, an increasing proportion of deaths mentioning COVID-19 are in people where COVID-19 is on the death certificate but is not the underlying cause of death. We estimate that during the Omicron wave, 14% of people have died with COVID-19 rather than from COVID-19. Therefore, we estimate that, of the 4,027 deaths reported in 2022, around 3,500 may be due to COVID-19.

Thus, if mortality from other causes is in line with our pre-pandemic predictions, the COVID-19 deaths will increase excess mortality by around 9% over the quarter (by around 10% in January and February and by about 5% in March).

Table 1 above shows that estimated excess deaths in respect of doctor-certified deaths are:

With the release of the full-year data on doctor-certified deaths, the ABS also released an analysis of excess deaths showing -1,734 for 2020 and +5,090 for 2021. It is worth noting a key difference in approach between our estimate of excess deaths and the ABS estimate – we have used data from 2015to 2019 to form and estimate of the expected number of deaths in 2020 and 2021 in the absence of the pandemic. The ABS has used data from 2016 to 2020 to form an estimate of the expected deaths in each year from 2016 to 2021.

A comparison of our estimate and the ABS estimate is shown below.

The ABS estimate of excess deaths is around two percentage points higher more than our estimate for both 2020 and 2021:

OWID includes information on all excess deaths in Australia. It draws its analysis from the World Mortality Dataset (WMD) that uses the approach of the June 2021 paper Tracking excess mortality across countries during the COVID-19 pandemic with the World Mortality Dataset by Karlinsky and Kobak. The full database of actual deaths predicted deaths and excess deaths for each country is available on GitHub.

At the time of writing, OWID had not updated its tables and charts to include the month of December 2021, hence we have taken the following figures from the WMD directly.

Table 4 – Comparison to WMD (all deaths)

We have been in discussions with the WMD modellers over the past month or so to try resolve the differences between our estimates. They have made one change that has brought our excess death estimates closer together. The remaining difference stems from the way that WMD modifies the doctor-certified deaths to estimate total deaths, and we believe there is an error in their approach. The ABS have stated that they will be releasing weekly data on all deaths (including coroner-referred) later this month, and the WMD modellers have decided to make no further changes to the Australian estimates until this data is available. 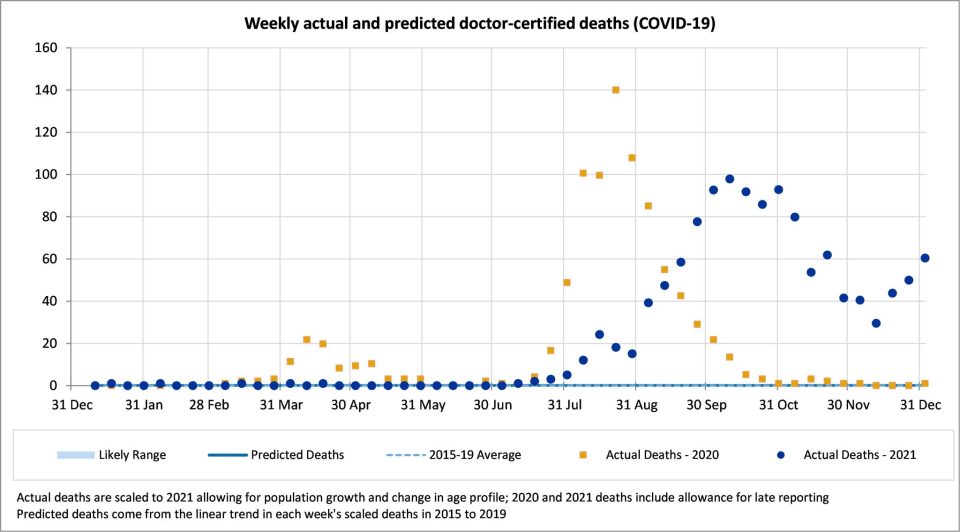 There were 192 doctor-certified deaths in December from COVID-19, compared to the 255 recorded deaths (63 fewer). We would not expect the numbers to be identical, because: 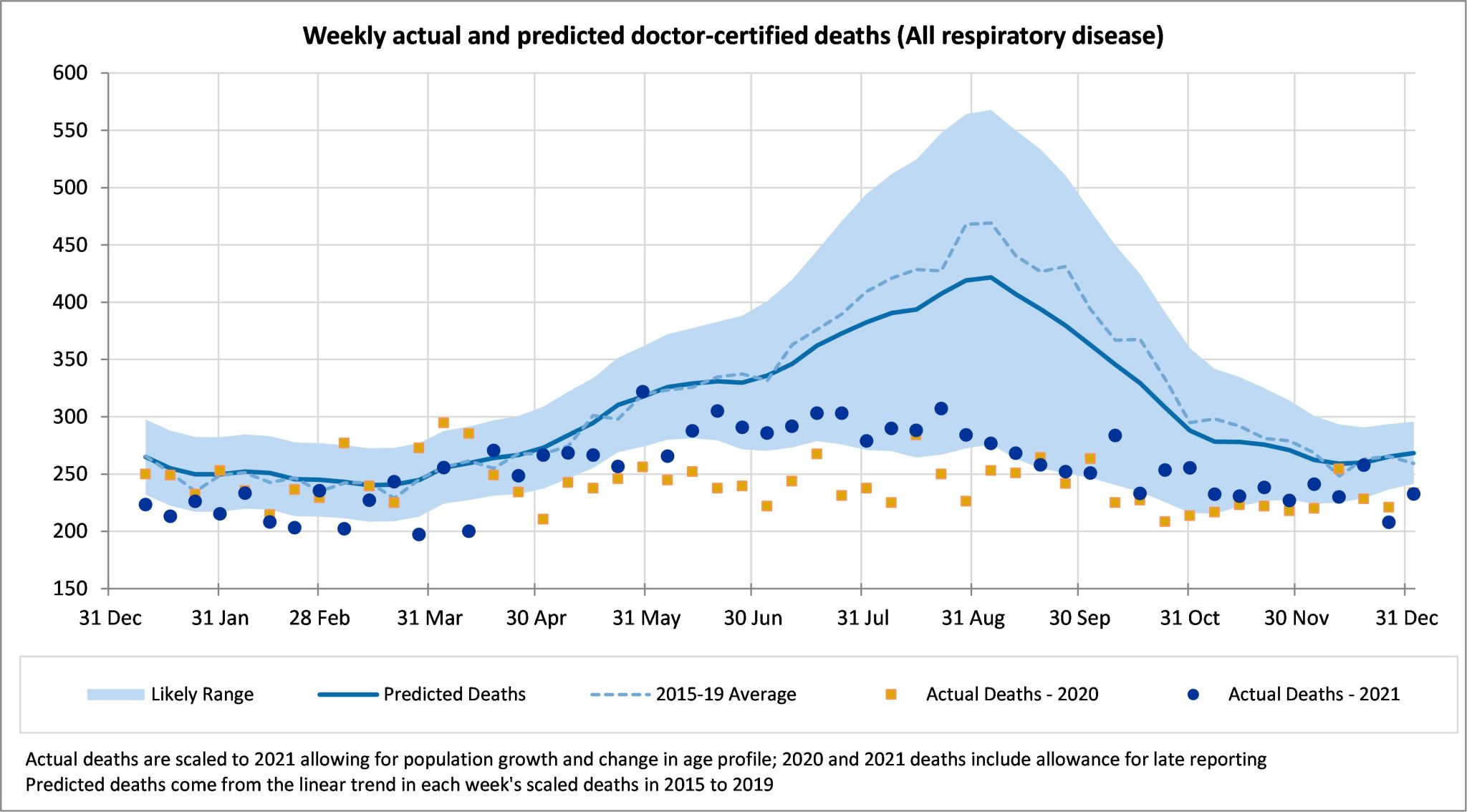 Following the trend observed since the beginning of the COVID-19 pandemic, Australia continued to see lower deaths from all respiratory disease in December 2021. While deaths from respiratory disease continue to be lower than expected, the absolute number of lower-than-expected deaths is fewer than observed during the winter months of July to October.

Deaths from respiratory disease in 2021, while much lower than trend, have been higher than in 2020 for almost all weeks since mid-April. 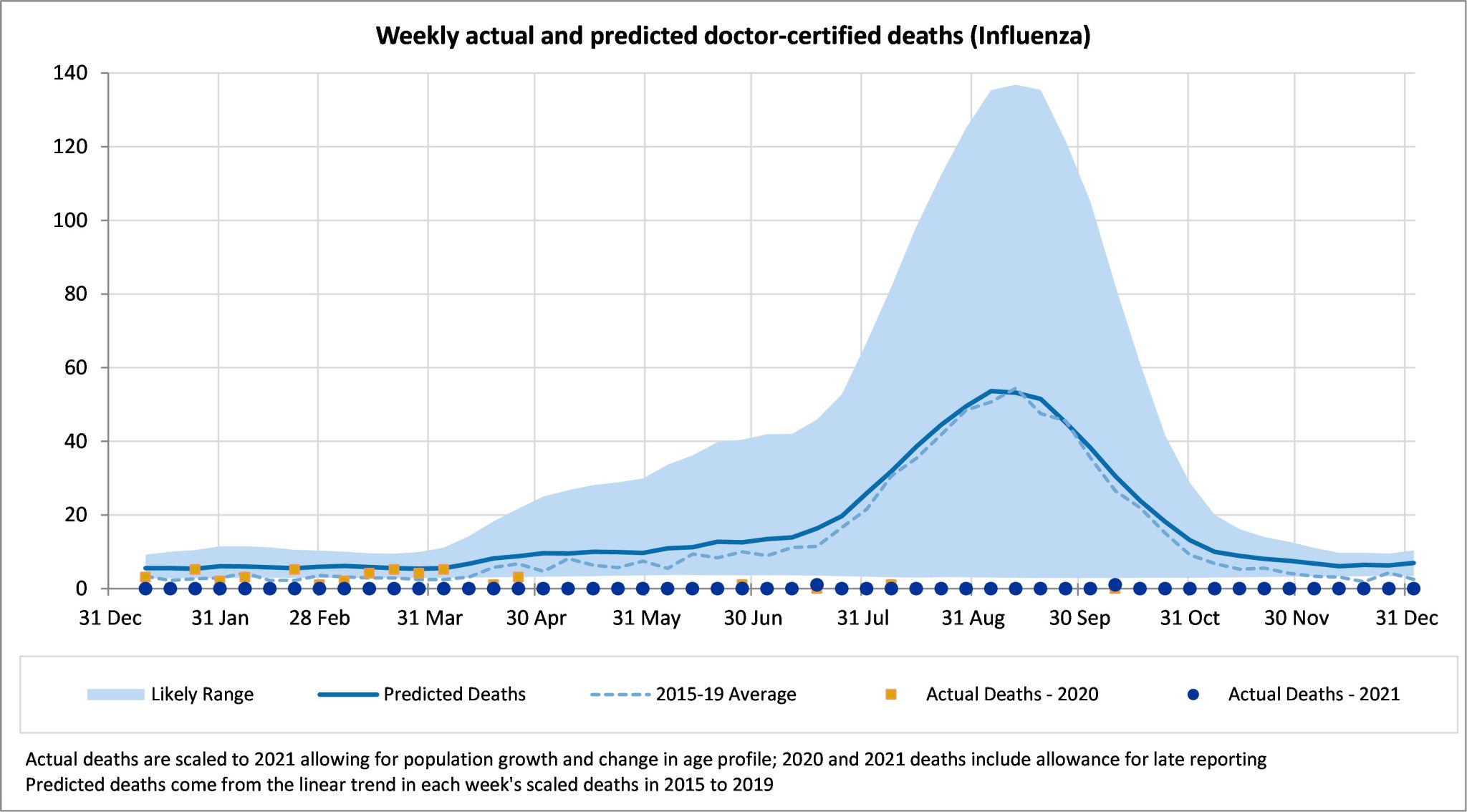 There were no Influenza deaths in December 2021, which means there were only two doctor certified deaths caused by influenza in 2021. 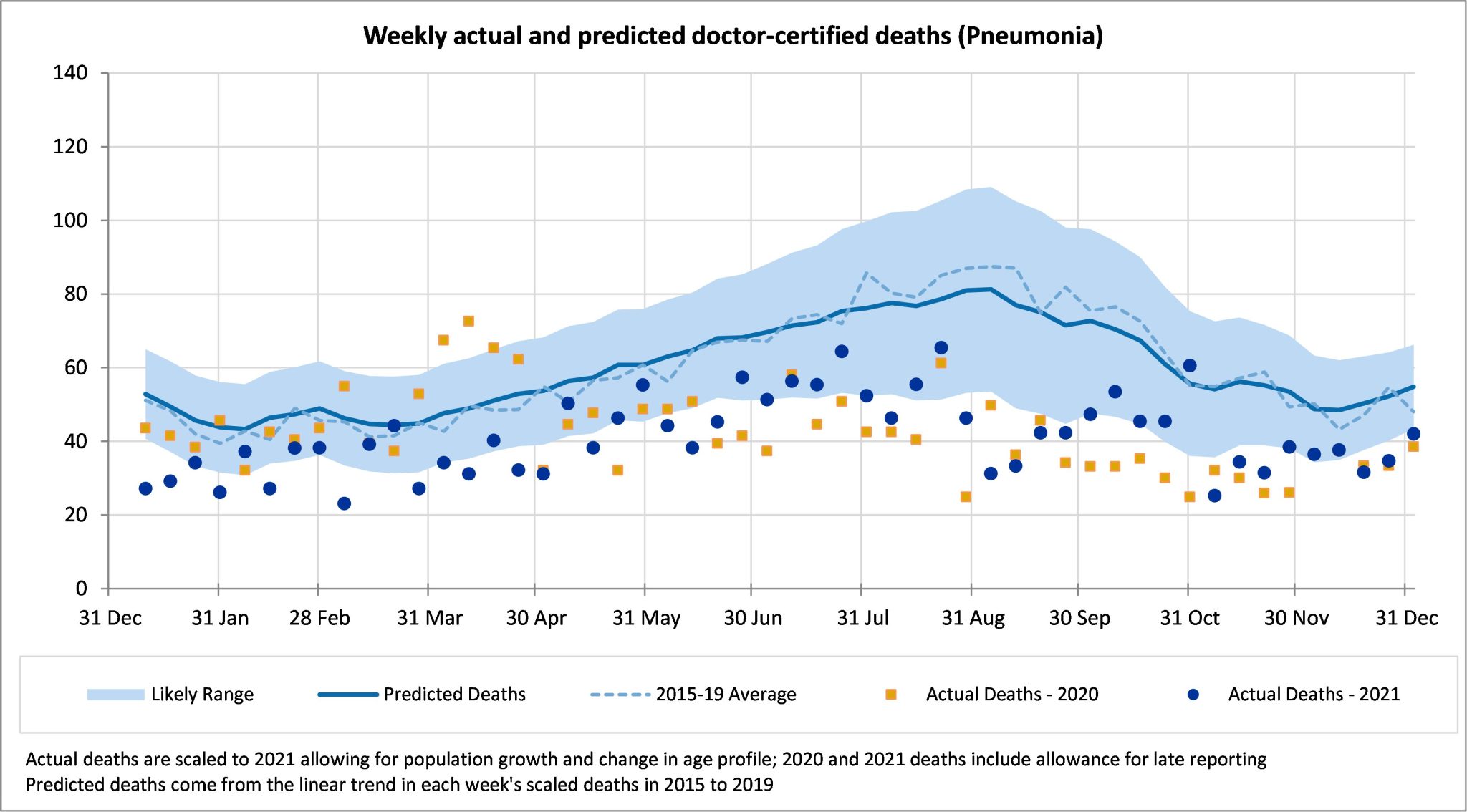 Pneumonia deaths were well below the predicted deaths in December, as they have been throughout the year. 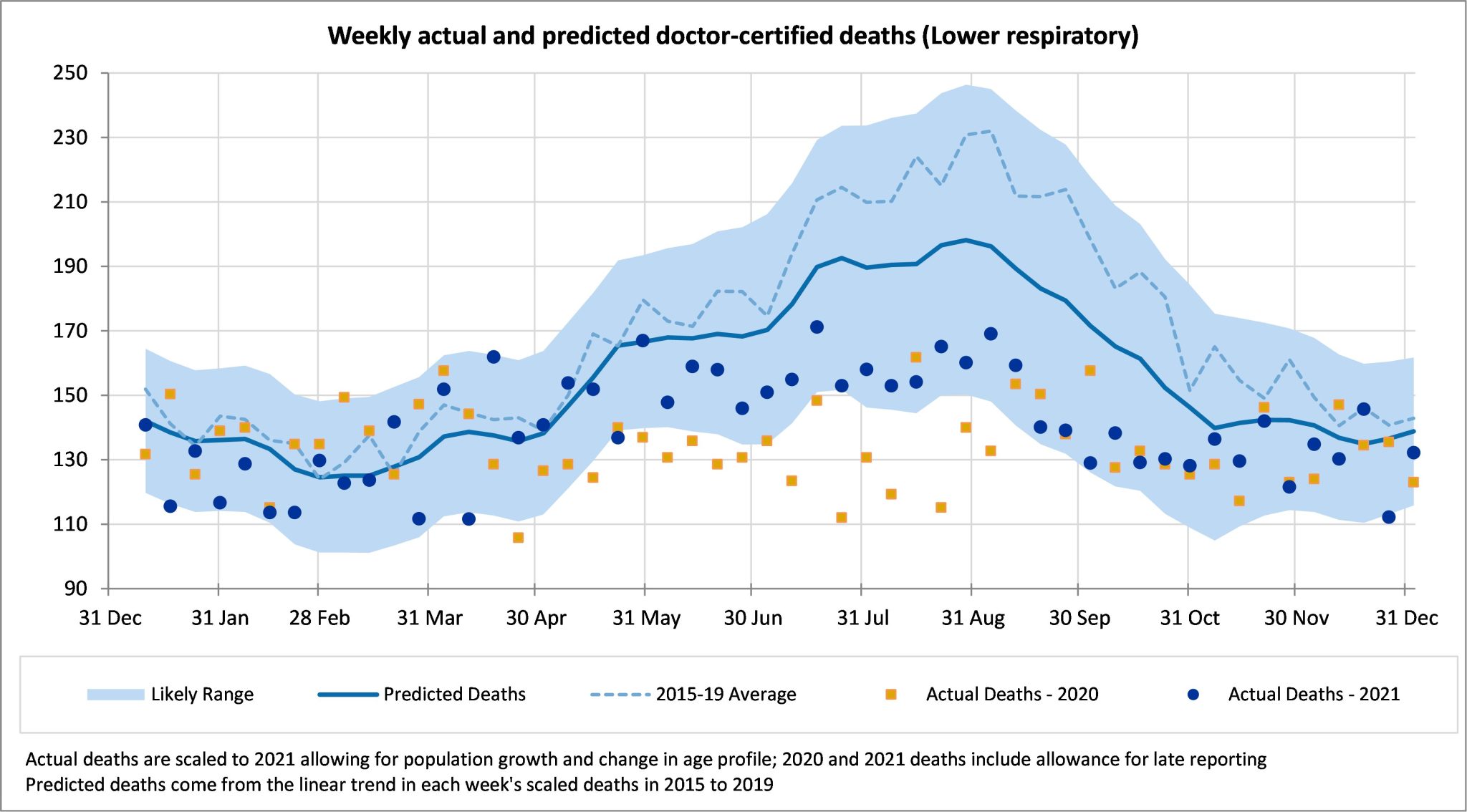 Deaths from lower respiratory disease were lower than predicted in November and December 2021, but not as far below predicted as over the winter months of June to October. 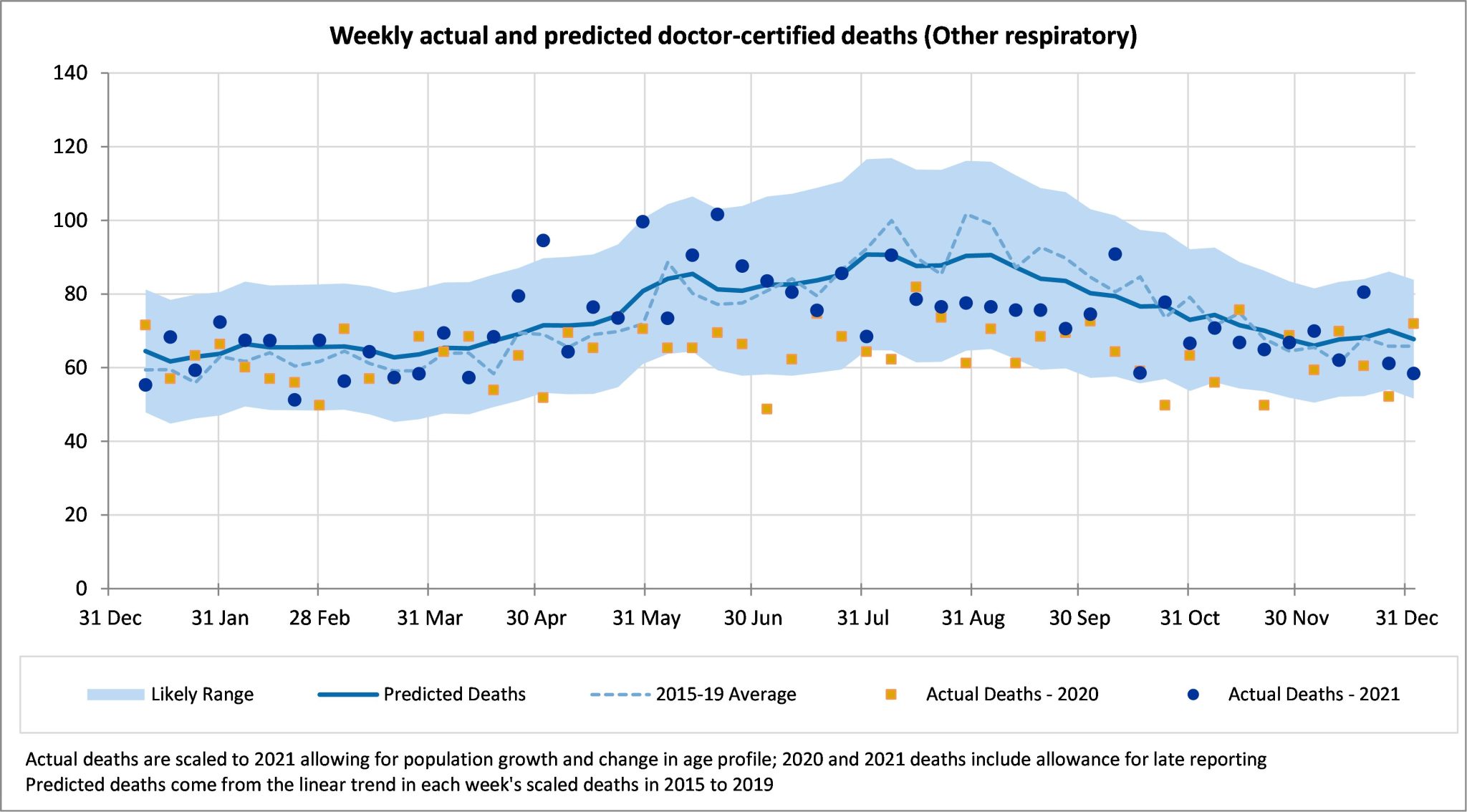 Deaths from other respiratory diseases continue to be close to our predictions with some highs and lows throughout the year. 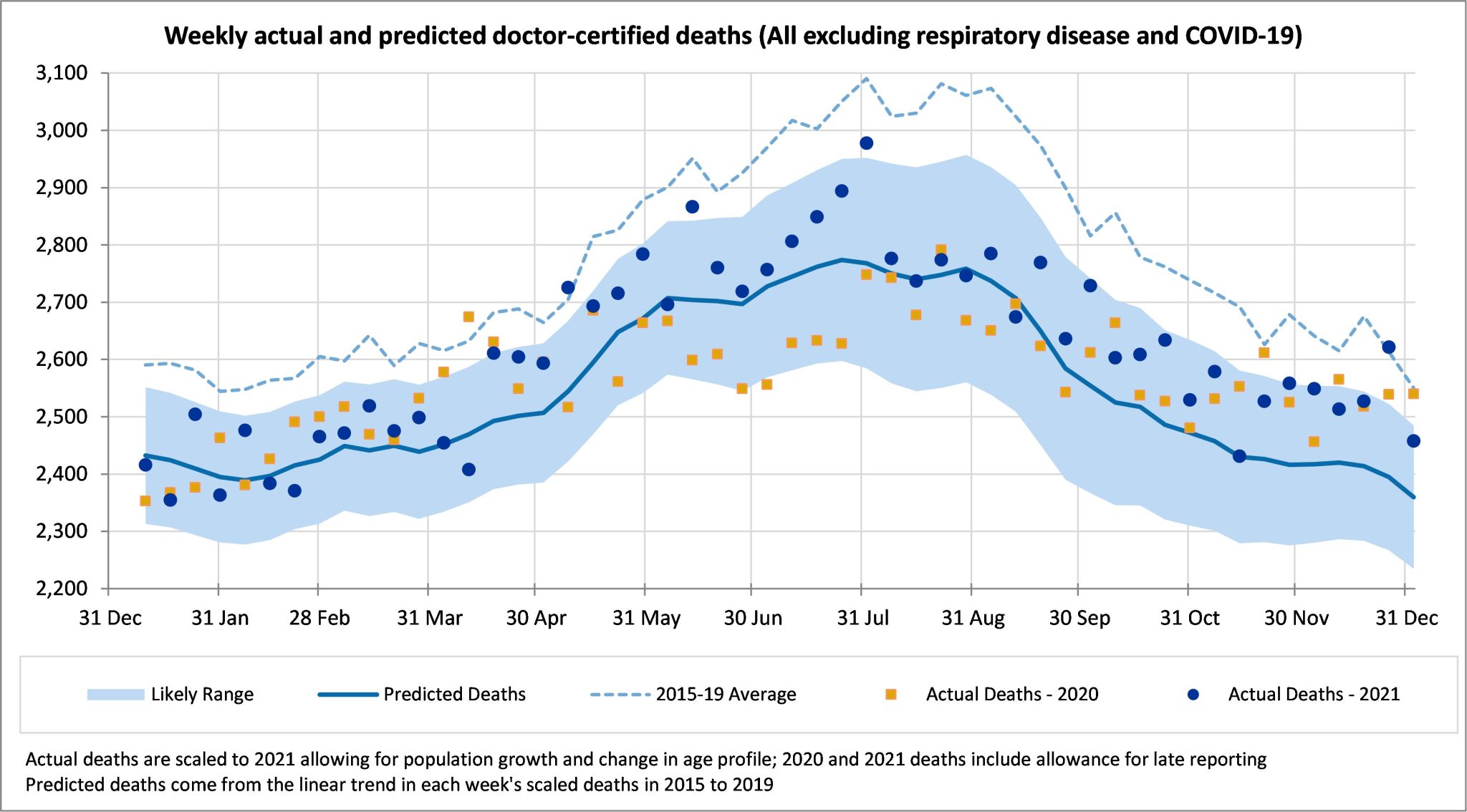 Excluding deaths from COVID-19 and respiratory disease, deaths in December were much higher than expected, and at or above the prediction interval for most weeks. This is mainly driven by much higher-than-expected deaths from heart disease and ‘other’ diseases.

The following figures show a breakdown of non-respiratory/non-COVID-19 deaths into cancer, heart disease, cerebrovascular disease, diabetes, dementia, and all other causes. 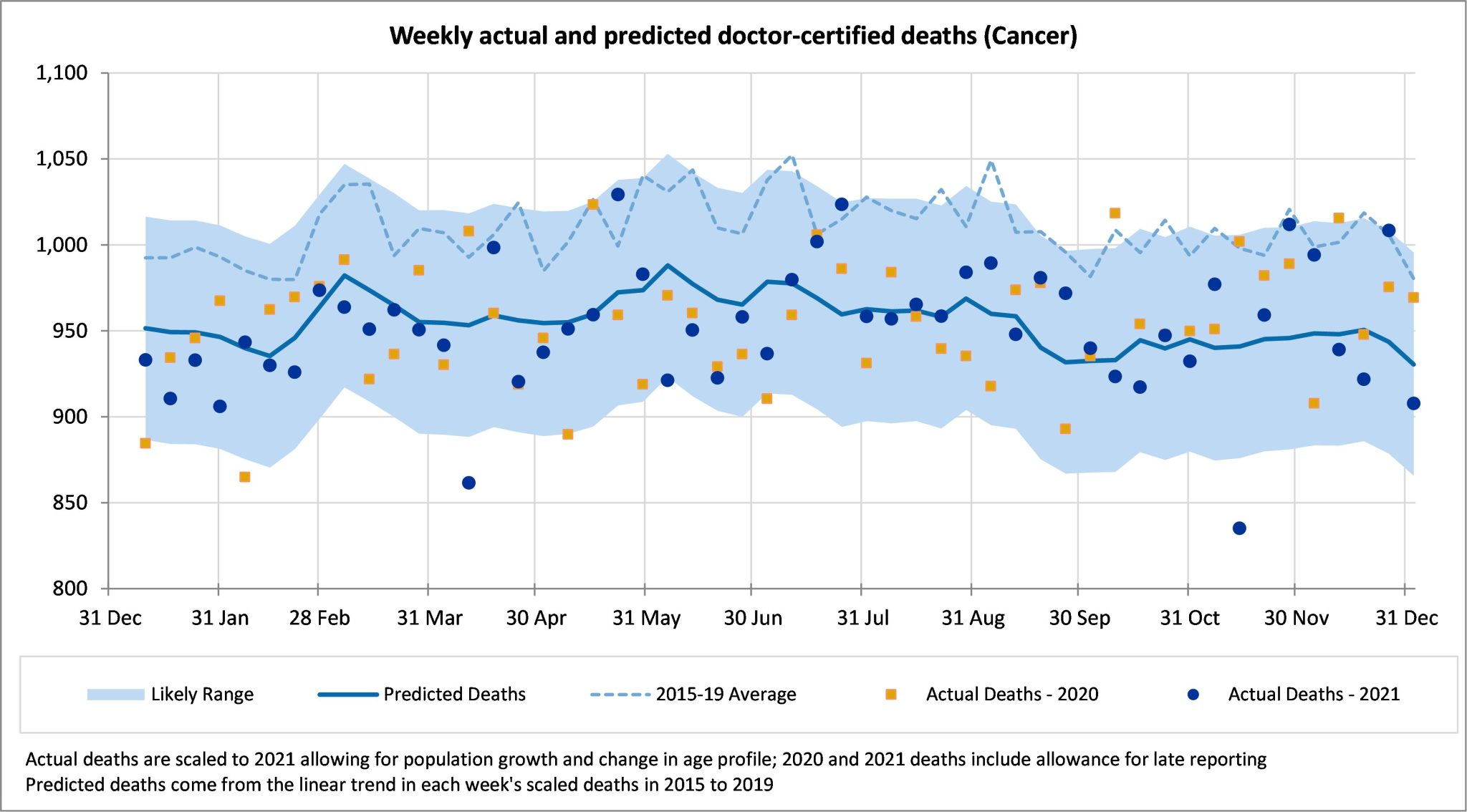 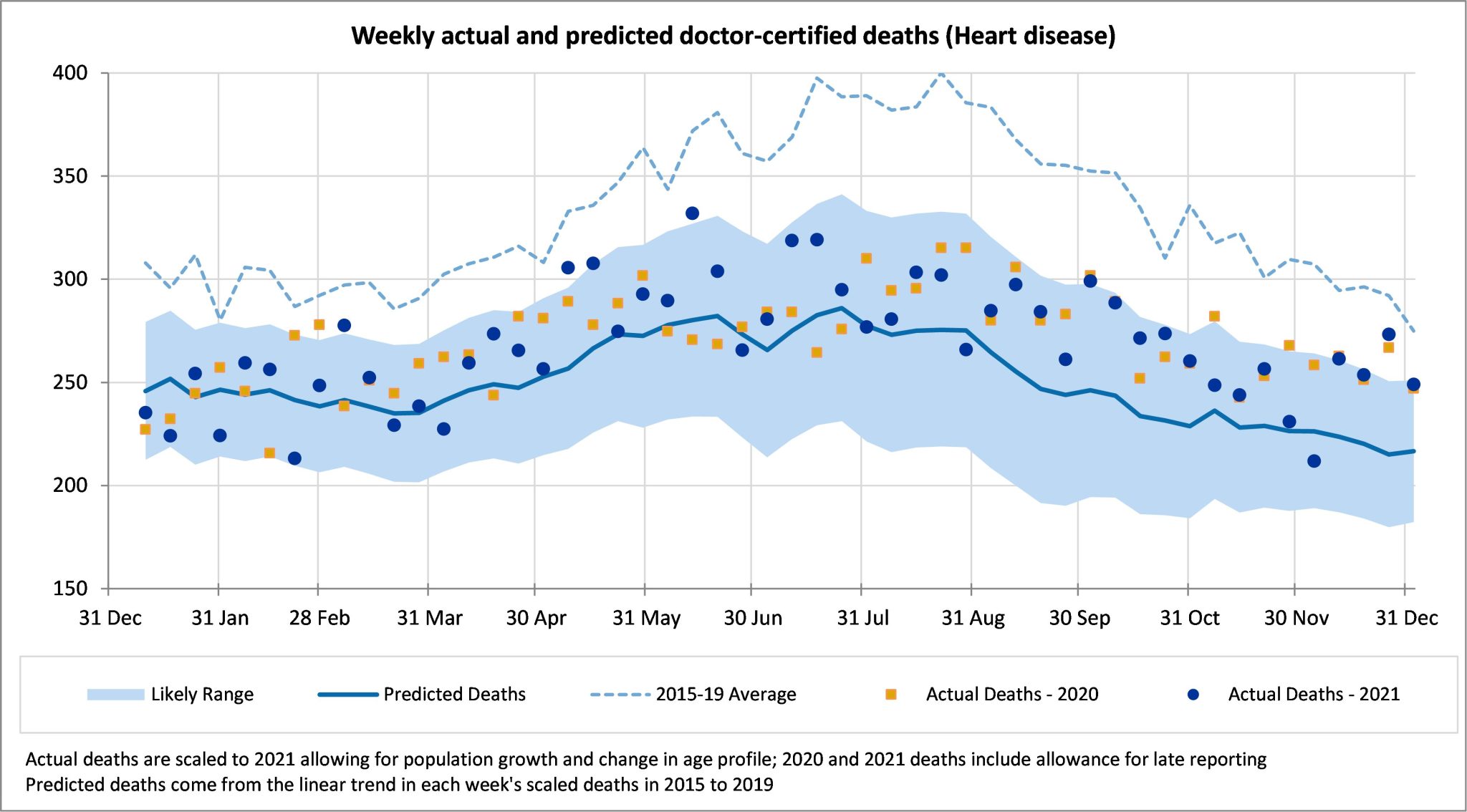 Deaths from heart disease were 14% higher than predicted in December 2021, with four out of five weeks at or above the prediction interval. There are very few weeks in 2021 where deaths from heart disease were lower than predicted, and only three such weeks after mid-April 2021. We note that the predicted values allow for continued strong mortality improvement in 2021 in this cause. 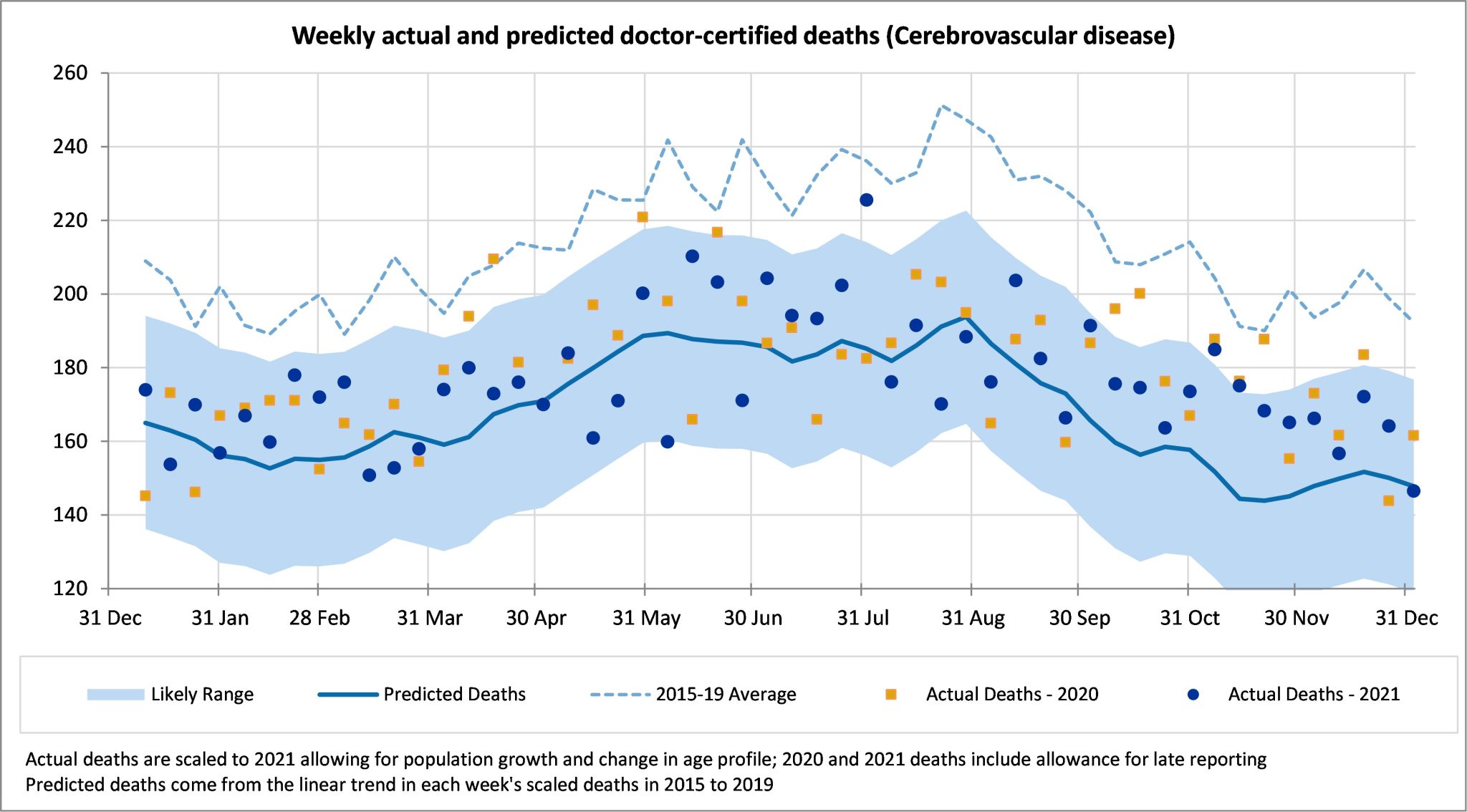 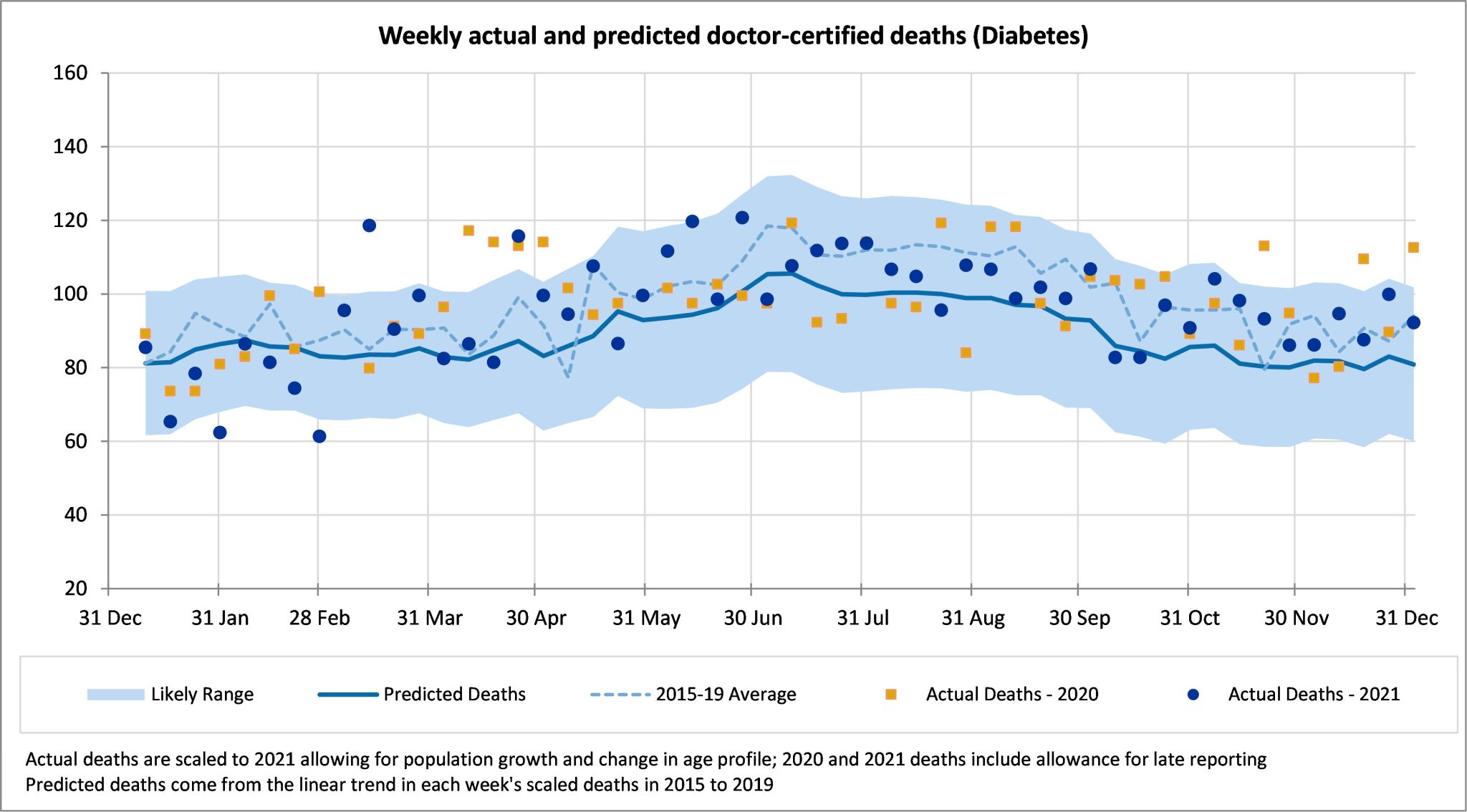 Deaths from diabetes are 12% higher than expected in the last month of the year and 7% higher over the whole of 2021. Deaths from diabetes only make up a small proportion of all deaths, which leads to a somewhat higher volatility, however most weeks are above the mean prediction. 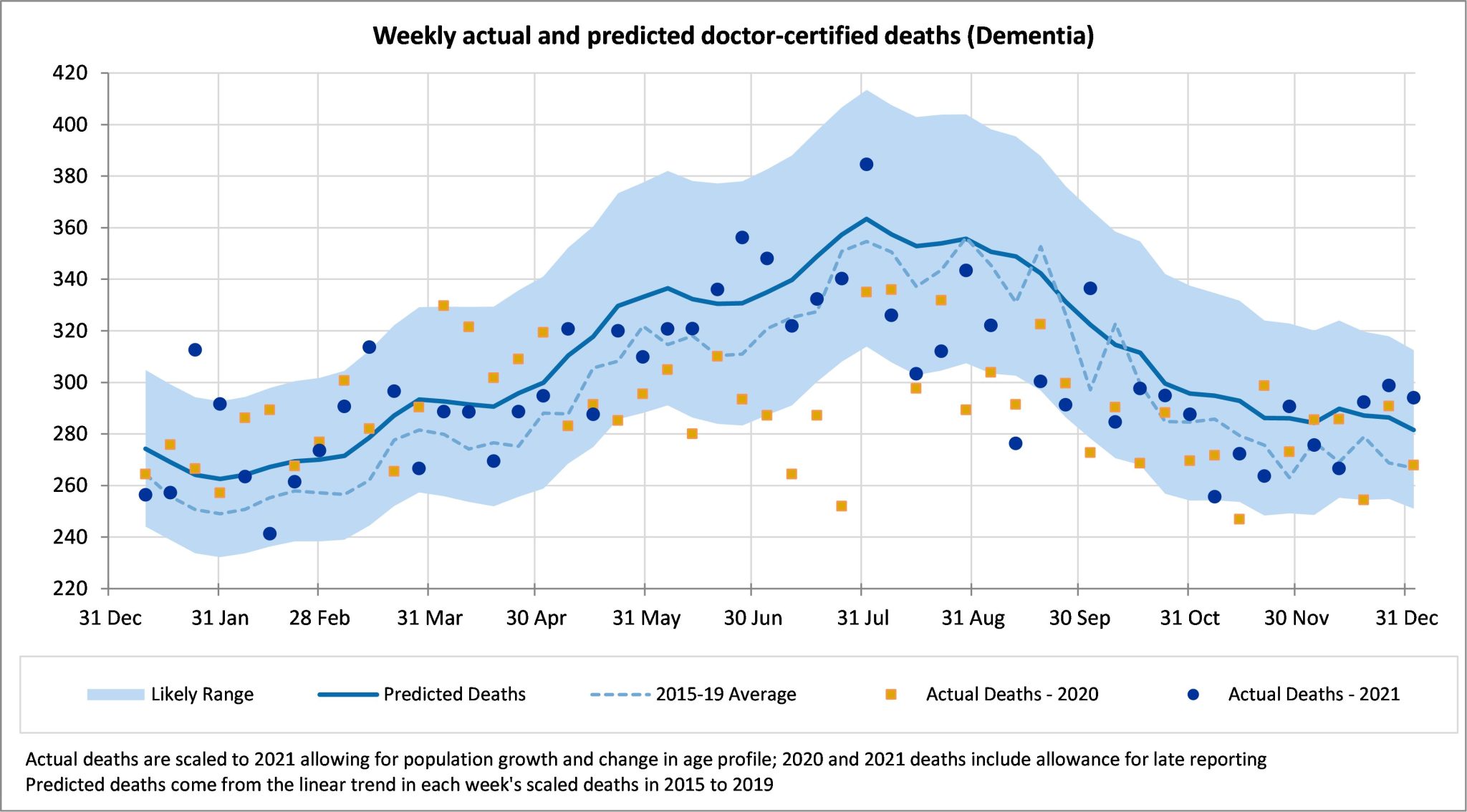 Deaths from dementia were close to expected in the last five weeks of the year. This follows lower than expected experience during July-November and is possibly related to lower than usual levels of respiratory disease in the community. 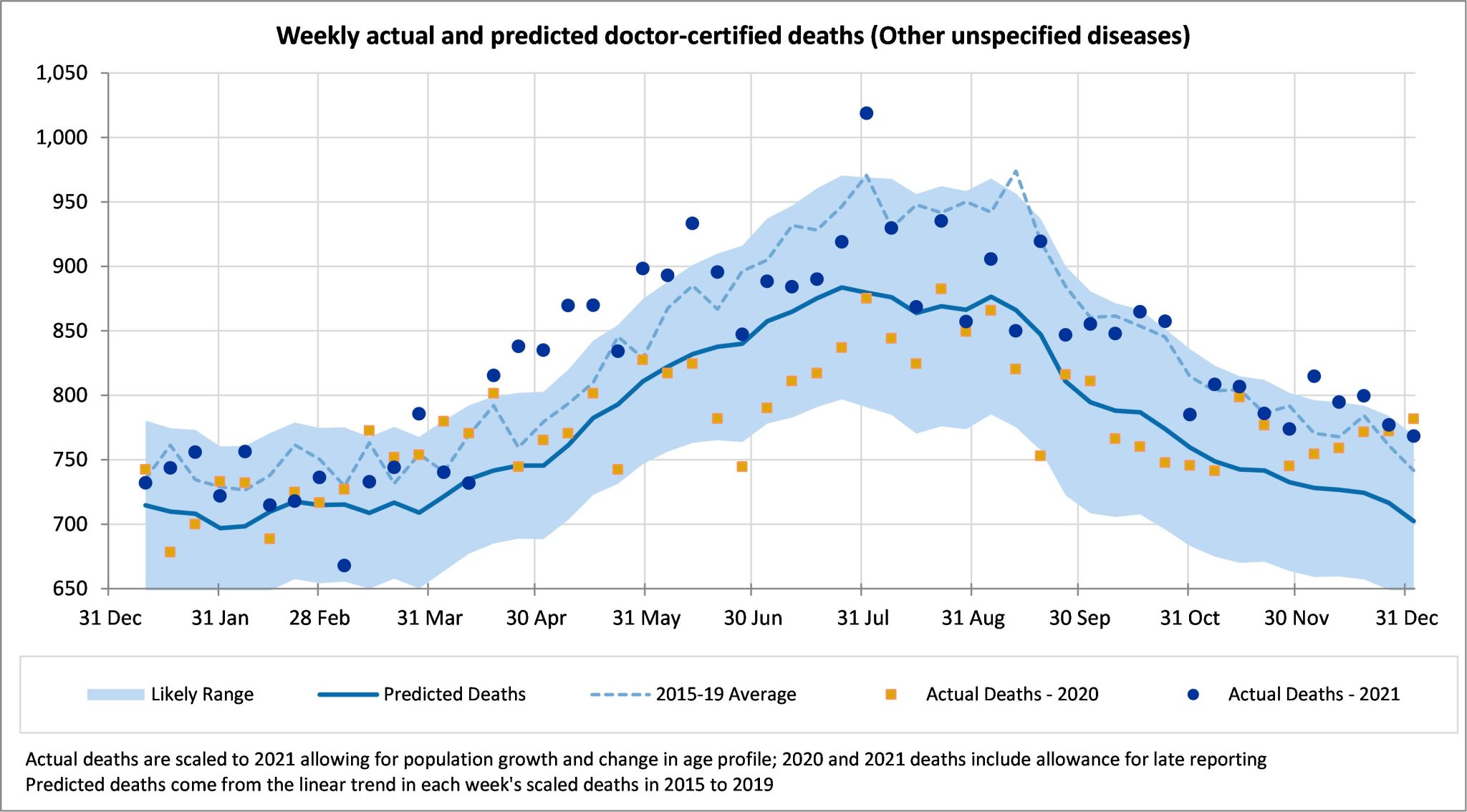 Deaths from other causes, i.e. those not explicitly reported on by the ABS, were again higher than expected in December. In particular, the first three weeks of December were higher than the upper limit of the prediction interval.

‘YDAWG Analytica’ go to the movies