Although not falling, the increase of global cases have remained steady. In Australia, Victoria’s Stage 4 restrictions have managed to reduce case numbers while in NSW, the CBD outbreak has spread into various areas. APRA’s recent reports evaluate the effects of COVID on our industries and we are now seeing cases of reinfection. 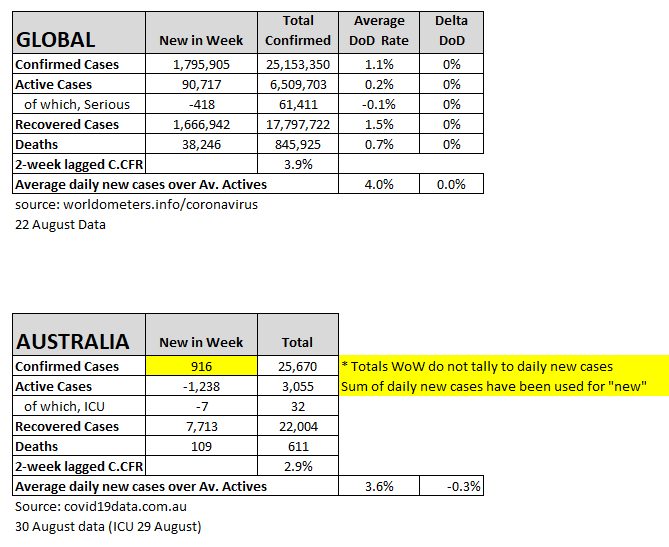 For six weeks, new cases have been 1.8 million. Joy would be falling new cases, but ‘steady’ is a welcome new phase after months of ‘increasing’.

Only France’s new surge in new cases is appearing dangerous. Italy and Turkey’s new surges are not yet problematic and Spain, Belgium and Netherlands appear to have contained their new surges.

New Zealand is containing their new outbreak, but there is no insight yet on the source of this ‘outbreak from nowhere’. In world COVID-management terms, the New Zealand experience is one of the very important case studies.

In world terms, Australia looks a strong success story, with new cases only 25% of the very sharp peak in less than a month.

Victoria recorded 784 cases, around half as many as 1,467 last week with the Stage 4 restrictions clearly doing their job.  However, the next phase of reducing case numbers may be challenging: 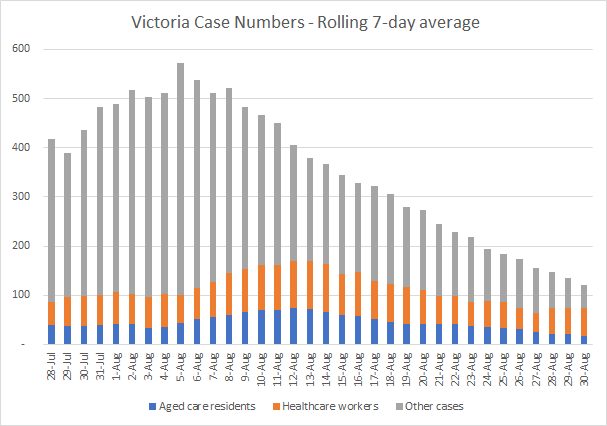 Victoria recorded 111 deaths, up slightly from 106 last week.  Of those, 102 deaths were associated with outbreaks in aged care (85 last week).

NSW Health is strongly advising people who live or work in Sydney or the Central Coast not visit aged care facilities at this time.

It is thought that these two clusters are linked (although links are tenuous) and that the detention centre cluster is linked to the Logan cluster (genomic testing cannot rule it either way).

No other state/territory reported any locally acquired cases this week.