In his final column for the year, Hugh Miller digs out the mulled wine and takes a look at what our music streaming patterns tell us about the Christmas season.

People love to hate the early arrival of the festive season – decorations in shops, ads on TV, and Christmas music being played loudly in public spaces. But it does suggest that at least some people are ready to put up the Christmas lights and start stocking up on mince pies. I’ve personally become more relaxed over time – Christmas music in November does not bother me as much it once did.

It’s not easy to quantify when the Christmas season ‘starts’, but we can get some insights by looking at our music listening habits. If people are choosing to listen to Christmas music, then perhaps they’re into the festivities.

Luckily, there is data to look at. Spotify has provided some of its listening data on Kaggle. From that, we can extract the top 200 songs (and listen numbers) every day in Australia, for people using the streaming service, for five years to 31 December 2021. This is enough to get a feel for how Christmas music is played over the calendar year.

Step one is to identify which songs are Christmas songs.

My analysis is a little crude, but I’ve looked at lists of:

From this, including some manual removals, I’ve produced a list of 60 songs that are clearly Christmas-themed. While the list isn’t comprehensive, it’s enough to give a pretty good picture for how listening evolves over the silly season.

Once the list is identified, we can figure out how much they’re played each day over the calendar year. The main results are shown in the chart below, with the average across five years shown in black. 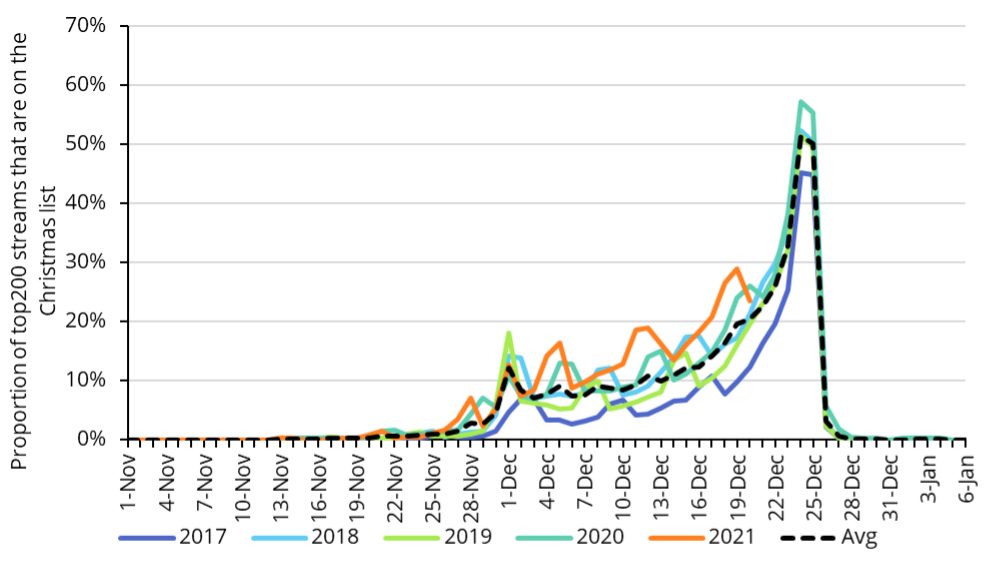 So when does the festive season start?

It still looks like the 1st of December is an important milestone, with a sharp increase in listening and momentum building thereafter across December. I find several things interesting about the figure:

All the normal sorts of caveats apply. Spotify’s top 200 lists are obviously one slice of reality, rather than anything definitive. Spotify might be recommending Christmas music from a certain date, which would obviously heavily influence the patterns.  But as a way of encapsulating the seasonal build-up, it gives a fair picture.

Whatever your plans for December and January, I hope you’re able to make some time for relaxation, friends and family. Thanks for reading!

I'm sad to report that in my household, Mariah seems to be played from around late August, when 'Christmas excitement' begins... I think (hope, for others' sake!?) that we may be an outlier