Speaking at event was Nicolette Rubinsztein, former President of the Actuaries Institute in 2019. Nicolette shared personal experiences with diversity and shared some lifelong insights on how actuaries can help promote diversity and create an inclusive working culture.

In 2016, Nicolette published book titled “Not Guilty” which featured seven strategies to help successful women have a fulfilling career whilst being a passionate parent.

At the beginning of the session, Nicolette shared personal stories in how she overcame diversity – particularly within her studying years at the University of Cape Town where Nicolette was one of five female students in a cohort of 60.

From her graduate position, Nicolette began her career in a male dominated local insurance company where there were only three women in the actuarial department before moving to Towers Perrin (now Willis Towers Watson) in Australia as a superannuation consultant. In the 1990s, flexible working arrangements were not common and although Tower Perrin were supportive of flexible working arrangements, there were apparent concerns in productivity as part-time employees were not 100% contactable.

Roughly 7 years ago, Nicolette branched out to start a career as company directors and gradually over time, built a portfolio. Nicolette described her vast and broad career as the “opposite of discrimination” with many societal tailwinds and supports from board sponsors in which many were men.

Nicolette then shared a few statistics from the World Economic Forum Gender Equality Analysis to help the audience better understand issues regarding gender equality and diversity in Australia.

In 2006, Australia ranked 15th out of 156 countries on the Global Gender Gap Index, and in 2021, Australia is now ranked 50th. While women are ranked first in educational attainment, the support is not equally as strong for other dimensions of the index including economic participation and opportunity, health and survival and political empowerment.

Other key issues from the World Economic Forum Gender Equality Analysis include: 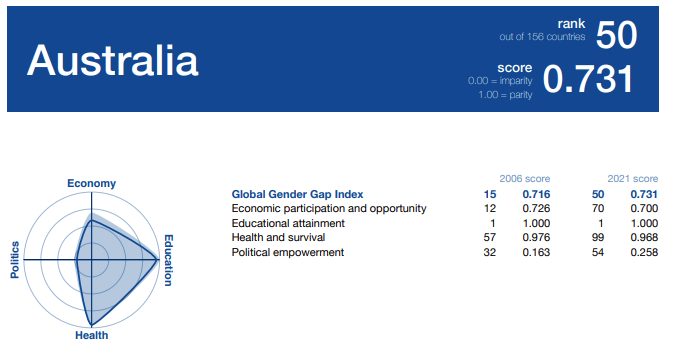 What could be the root cause of the issue? Nicolette shared some of her observations:

In a case study outlined by Catherine Fox in her book “Stop Fixing Women”, there are two core findings that relate to how management team being very male skewed despite an equal intake of male and female at graduate positions:

Different cultures and countries have different trends in areas of academic performance.

For example, research shows Australian girls have been underperforming in NAPLAN maths compared to boys, while other countries such as Singapore and Malaysia show more equal results.

Overall it could relate to different parenting style and general expectations of pathways to take for boys and girls.

Nicolette mentioned that in her opinion, women are less confident than men, especially during mid-20s to 30s. That’s why Nicolette encourages women to be aware of the phenomenon and actively putt their hands up for tasks they used to consider as “challenging” to improve their confidence.

It was our pleasure to have Nicolette sharing her journey from a diversity lens, as well as some inspiring observations and advice to better promote gender diversity.

Alyssa works as an actuarial consultant at EY Melbourne, specialising in the area of banking and capital markets. Alyssa completed a Bachelor of Commerce degree at the University of Melbourne, where she majored in Actuarial Studies. Alyssa co-founded the Melbourne chapter of non-profit organisation Australian Wall Street, with an aim to bridge the gap of students in transition from university to the workforce with networking and upskilling opportunities from experienced professionals. Alyssa is currently a member of the Young Actuaries Program Victoria.

YAP VIC | Women in Business Seminar: Diversity. What can we do to help?