As part of our 125-year celebrations, Andy Yang, Chair of the Institute’s Asia Subcommittee, spoke to Fred Rowley, Past President of the Actuaries Institute and of the International Actuarial Association, about his life in the profession, his role in pioneering the Institute’s relationships in China, and his leadership in the international profession.

Andy: Tell us how you got involved in the Institute’s work in China.

Fred: I first got involved in China during my time at AMP in the late 1990s. Since 1984, China had sought to develop an actuarial profession comparable to the West, but progress was slow until the late 1990s. Chinese university teachers were talented in technical subjects but had little practical experience in a developed insurance industry or in teaching the vocational elements the profession requires.

So, from 1998 to 2002, AMP brought around 12 senior academics from mainland Chinese Universities to Australia for Actuarial Science courses lasting around six weeks. The aim was to assist the regulator and support the long-term development of the profession. There was a concurrent social program, designed to encourage ongoing mutual contact. The program was regarded very favourably by the regulator and the participants. We developed contacts with senior teachers, including examiners in the newly-formed China Association of Actuaries. All these contacts were of crucial value in facilitating some of the Institute activities that came later.

The second big step was publishing a book! As Chair of the Institute’s Asia Development Taskforce I persuaded some university contacts to translate the Control Cycle textbook. It was published in 2004, by the Renmin University Press. Not long after, John Shepherd and I did ‘double act’ tours to several Chinese universities presenting Control Cycle seminars – the control cycle was seen as an Australian differentiator. All the courses seemed to go down well.

The most recent landmark was the publication of the first all-China Insured Lives mortality table a few years ago. I was asked to be a Vice-Chair of the approving panel. It was a personal role, but I think it reflects on the reputation of the Institute that they asked an Australian actuary.

“A lot of the most important work happens ‘in the corridors’. There’s no better place to sharpen up your negotiating skills!”

Andy: Tell us about the highlights of your time as the President of the International Actuarial Association in 2015?

Fred: It’s a huge honour to lead a group of such stature and to represent the global profession in some really significant international conversations. When leading a group like that, it’s vital to understand the needs and temperaments of all the players if you want to build things that last. A lot of the most important work happens ‘in the corridors’. There’s no better place to sharpen up your negotiating skills!

One real highlight was meeting face-to-face with some really influential supranational stakeholders. One that sticks in my mind was meeting Christine Lagarde – then managing director of the IMF. It was a great privilege to build the profile of the IAA with her and the IMF and exchange some views on a post-GFC financial system.

Andy: You’ve always been very active in international volunteer work – the IAA, CERA, China and Council etc. What drove you?

Fred: I was taught as a child to respect other peoples and cultures – to see what we share more than where we differ. The IAA exists to develop the actuarial profession globally – with emphasis on the ‘actuarially-less-developed’ world – so there’s a good fit.

Through the IAA, I’ve met with actuaries and officials from around the world. In my time, the IAA also welcomed the China Association of Actuaries – whose progress has been breathtaking – as a full member. It has been a fascinating, mind-opening experience – and I made good friends around the world.

Andy: If you were speaking to newly qualified or aspiring actuaries today what would your message be?

Fred: Although the tools and techniques change, the principles by which we conduct ourselves and our careers really don’t. So, lessons from the past may still be useful! Here are my five personal maxims:

Andy: Finally, what is the best part of being an actuary?

Fred: It’s hard to say there is a single ‘best’ part! So let me break it up.

The most satisfying part and my reason for ‘buying into’ the profession in the first place is the knowledge that I help provide greater financial security for the community at large.

The most enjoyable part was working with and learning from the people I’ve met – people who are often simply brilliant and unbelievably generous with their knowledge and time.

The most exciting part? Making a difference on issues like the global CERA credential, climate risk awareness and capacity development projects for the developing world. And doing it through the international arm of a truly great profession.

“Opportunities don’t just fall into your lap. But be creative and adaptable and you’ll make your own.”

The below photo dates from around 2000 and features some distinguished Chinese colleagues associated with Nankai University. The senior member is Mr Tuan Kailin, said to have brought the actuarial profession back to China singlehandedly. Two of the others (Mr Fu Anping and Prof Li Xiufang, at each end) were among the first class to graduate in China. 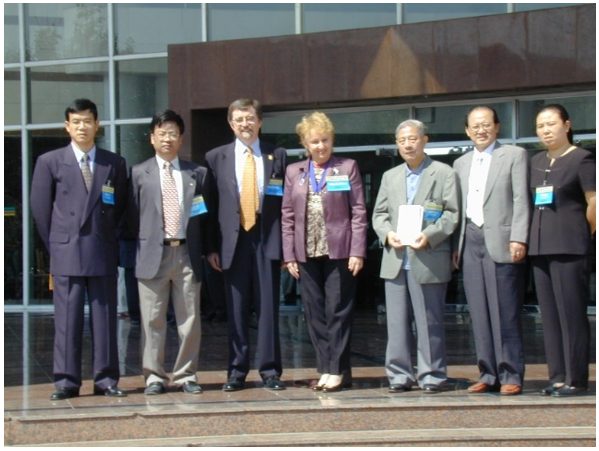 A photo from 2009 in Hyderabad where we signed the CERA Treaty and brought into being the global CERA credential. 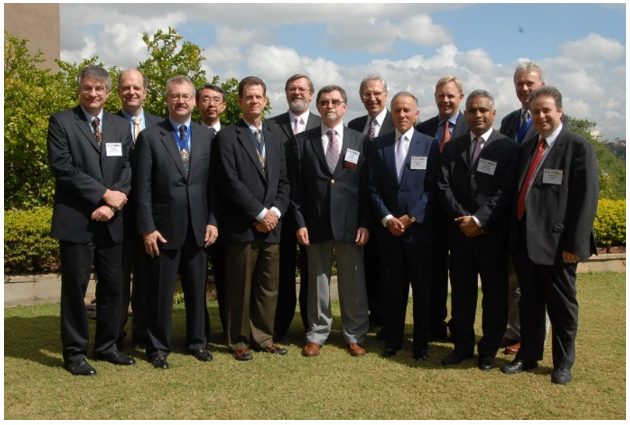 From the ICA2018 Berlin – where the baton was handed to the Institute as the host of ICA2023.

Insights on ‘Cyber Risk and the Role of Insurance’

What is ‘loss and damage’?

An Australian actuary on the global stage