by Jeff Humphreys and Caroline Chikomba

In the past few years, the Australian group life insurance industry has seen multiple market and regulatory events that have boosted awareness among members. The most recent legislation changes were Protecting Your Super Package (PYSP) effective 1 July 2019 and Putting Members’ Interests First (PMIF) effective 1 April 2020. With the PYSP communications being rolled out starting from around April 2019 onwards, multiple funds in the industry have observed an increase in TPD claims notifications in Q2 and Q3 of 2019.

Depending on the fund, the increase in awareness has brought about a mix of higher reporting at early durations as well as at longer durations. For the increased reporting at early durations, actuaries would need to decide if the higher reporting is an increase in ultimate claims costs, or if it is speeding up in reporting of claims that would have been notified at a later point in the future, or a mix of both. On the other hand, for claims that were reported at longer durations, actuaries would need to decide if the lengthening of average delay represents a permanent shift for the portfolio.

The session, presented by Phin Wern Ting (Group Pricing Actuary, Hannover Re) and John Walters (General Manager – Group Business, Hannover Re) kicked off with a setting of the scene with the current market landscape of the group insurance market including impacts of lawyer involved claims – leading to reserve strengthening and some higher premium increases and withdrawal of reinsurance support, the Royal Commission into Misconduct in the Banking, Superannuation and Financial Services Industry, Protecting Your Super / Putting Members’ Interests First legislation. All this led to an increase in media attention and publicity of insurance within super. This has been observed in the rise of TPD claims being notified with a sample of four funds insured by Hannover Re observing more than five years delay in claim notifications. There has also been an increase in the reporting of recently occurred events.

Phin and John discussed the two implications from increased notifications on IBNR estimates:

Observations of the application of the unadjusted chain ladder method of one of Hannover’s clients (Fund A) included:

Phin and John discussed their back testing case study to observe the Actual versus Expected (AvE) claims reported for a sample of four funds using claim notifications from Jan 2014 – Dec 2020 over the incurred period of January 2011 – December 2013. A pre-PYS/PMIF, all lives IBNR triangle was used. 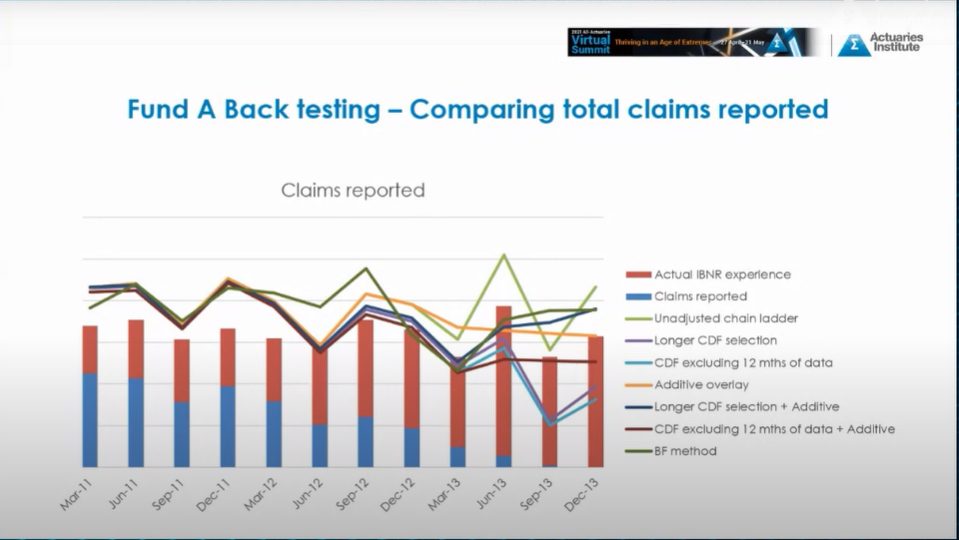 Conclusions from the case study included:

Jeff has been practicing as an actuary in the superannuation industry for over 25 years. Over this period he has been heavily involved in the group risk market, providing design, pricing and reserving advice to trustees, employers and life offices, both as an employed actuary and since 1996 as a consulting actuary. Jeff has been particularly involved in the industry fund sector since the inception of the industry in the 1980’s. He is a member of the Institute’s Superannuation Practice Committee, and Working Groups on Climate Change, Conflicts of Interest and Retirement Incomes. He was a member of the Superannuation Complaints Tribunal for 6 years. Jeff is an apiarist, a Primary Ethics teacher and plays masters hockey for NSW.

Caroline has several years’ experience in the insurance industry having held various roles across actuarial consulting, claims, underwriting and pricing in general and life insurance, providing advice and consulting services to life insurers, superannuation fund Trustee Boards and management teams in relation to insurance arrangements. She is a member of the Institute’s Insurance in Super Working Group.

Under the Spotlight with the YAAB – Timothy Lam