by Brent Walker and Actuaries Institute

In this article, Brent Walker explores mutation and cellular entry of COVID-19 and what this might mean for future possible waves of the virus.

My early concerns about SARS-COV-2 may now be becoming reality. These realities should be considered by actuaries in their advice to clients. My concerns were and still are:

It was known even before this pandemic was declared that the coronavirus enters human cells via its spike protein locking onto to the angiotensin-converting enzyme 2, or ACE2 receptor protein. It is believed that the virus had come from bats, which have ACE2 receptors. Many other animals and most primates also have an ACE2 receptor, usually slightly different to the human version. Therefore, humans can pass this virus on to animals just as animals pass it to humans.  Given that there are six known versions of coronaviruses (four are common cold and flu like) other than SARS-COV-2, it is almost certain that human-animal and animal-human transmissions of coronavirus have happened previously.

While small mutations have been recorded within human infections of SARS-COV-2, there was a greater risk that the virus undergoes larger, more dangerous mutations in animals before re-infecting humans.

Recent evidence of this happening can be seen in Denmark where mutations of the virus have been detected in mink farms.  Minks have a modified version of the ACE2 receptor. It only takes one slightly mutated viral particle expressed from a worker at a mink farm to have the right shaped spike protein to lock on to a mink’s ACE2 receptor.  For some time, the virus has apparently been circulating (WHO reports 214 cases[1]) within more than 20% of the 1000 or more mink farms in Denmark[2] as well as in mink farms in US, Sweden, Spain, Italy and the Netherlands.

One mutation that has been detected, known as ‘Cluster 5’, is concerning because it appears that it is more virulent in humans because it somehow weakens normal immune processes in humans.   Although only 12 cases of Cluster 5 have been found since September, four of the infected people did not have a direct connection to minks suggesting there is community transmission.  Given that the Cluster 5 mutation has been around for 6-8 weeks there is bound to be many more people with this mutated form of the virus who have not had their virus samples genetically sequenced.  Whether it has already infected humans beyond Jutland is unknown but there is already a report that someone in Norway has a mink mutated form of the virus. Norway is only a short drive from Sweden and Sweden and Denmark are connected by a bridge.

As a result, all 17 million farmed minks in Denmark are to be culled so the Danish mink industry will be temporarily wiped out. The Danish authorities are also in the process quarantining large areas of northern Denmark in the hope of containing its further spread amongst humans[3]. Airline flights from Copenhagen to many other countries continued unabated because WHO has not yet advocated border closures, although England and Germany are today (9/11/2020) setting up border restrictions for people who have been in Denmark.

Because medical research has thus far focussed on vaccines and treatments that target the spike protein, there is a risk that they will be ineffective against Cluster 5.  This is because the mutation has occurred in the spike protein itself.  So, on several levels, this is a dangerous development. Does anyone else have the feeling of Deja vu?

The picture, supplied by Reuters, shows why once one mink has caught the virus from a human it would spread very quickly through a mink farm. Minks are farmed in close confinement. No mink to human transmission from mink farms in other countries is, so far, thought to have occurred. But if it has happened in Denmark, it is wishful thinking to believe that it has not happened at mink farms in other countries. 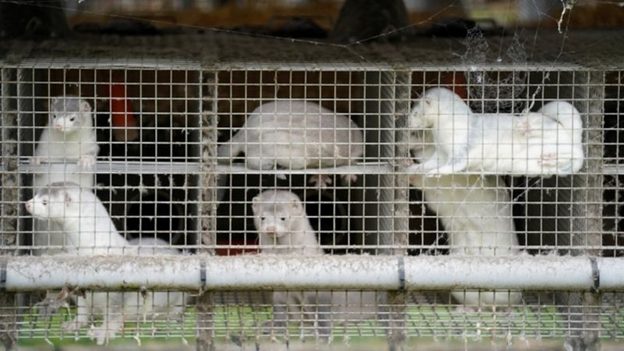 What other animals have ACE2 receptors? WHO reports that the virus has been transmitted to domestic dogs and cats and to lions and tigers, presumably in zoos. This mink experience indicates the dangers of it getting into intensively farmed animals, spreading amongst them, and then re-emerging back into humans in a new, mutated, form. Pigs and cattle are two animals that have ACE2 receptor proteins, that come to mind. But humans also keep many primates in zoos in relatively close confinements and, of course, rats and mice in laboratories.

The mink experience suggests that SARS-COV-2 provides dangers to humans through confinement farming, zoos, breeders, pet shops and the like. An added risk is that the mink Cluster 5 mutated form of the virus will become endemic in wild animal populations of ferrets, martens, otters, badger, weasels and wolverines, all closely related to minks as they have a similar ACE2 protein. In such a scenario, there would be zoonotic reservoir of the virus ready to cross back into humans at the right opportunity in the future.

Perhaps it is not just humans that should be subject to the four square metre rule, but all animals that humans could infect with the virus. A total rethink of the way humans interact with farmed animals and the environment should be considered.

What does this all mean for actuaries?  It suggests:

At this stage rates and mice seem to have immunity to SARS-COV-2 and maybe when scientists find out why they may be able to work out new ways for humans and many susceptible animals to attain immunity (other than via direct vaccination). It will be interesting to discover if rats and mice are immune to the mink version of the coronavirus.

The virus is known to enter cells via the spike protein locking onto the ACE2 receptor protein, but scientists suspect that it must have another route into cells.  Their suspicion was raised because the virus appears quite infectious despite human nasal passages generally not having many cells with this protein. They were correct, it does have other routes into human cells.

Two independent research teams[4] have recently shown that the spike protein of the virus also locks on to another protein known as neuropilin-1 (NRP1) and this protein “significantly potentiates SARS-CoV-2 infectivity”.

One of the interesting side effects of COVID-19 was that people with chronic pain often reported that the pain disappeared with the infection. NRP1 is involved in pain signals to the brain and when SARS-COV-2 locks on to it, the pain transmission signals become blocked. The scientists also showed that cells that have both ACE2 and NRP1 proteins were more likely to be infected than cells with only one of those proteins. NRP1 is also believed to be involved in the spread of cancer so there will be a lot of interesting future scientific research into this protein and, as a result, probably some breakthrough treatments for pain management, and cancers. This potentially has significant long-term relevance to actuaries in terms of extending life expectancy of people diagnosed with cancer.

The scientists who discovered the role of the NRP1 protein in the infection of SARS-COV-2 in human cells identified two other proteins that can also be involved. Proteins known as PIKFyve kinase and CD147 have also been shown in the laboratory to bind with the coronavirus spike protein and facilitate viral entry into human cells. But it is too early to tell what role these proteins play in the overall infection. The science on this coronavirus still has a long way to go!

The same scientists have also discovered that a small molecule called EG00229 will block the NRP1 protein from being able to be infected and that the use of this molecule reduces the infectivity of SARS-COV-2. This molecule, or something similar, becomes part of the immune response system of people who have been infected with the virus previously.

The upshot of all this is that we are still only learning about this virus and the ways it spreads.  Now that we know that the virus can also enter humans via routes other than ACE2, it again poses the question of whether the potential for it to continue to evolve and evade the efforts of vaccines and treatments that are currently in development.

So what does this all mean?

A prolonged pandemic with an evolving virus that requires ever larger number of new vaccines and treatments to be developed exposes us to further waves.  Even with this initial version of the virus, we appear to be witnessing a second wave in many countries, particularly in Europe.

Worldwide daily new cases of the coronavirus are now exceeding 600,000 and daily death rates over 9,000. Both are the highest these have ever been[5].

The implications for health systems are serious.  Several European countries are expecting that their intensive care facilities will not be able to cope with the coronavirus demand by mid to end November (Belgium sooner than this) and so have gone into lockdown or other forms of restrictions. Some are virtually giving up on tracking and tracing as the numbers of daily new infections have overwhelmed their control systems. Some countries are unable to test all the people who present with symptoms.

We are also seeing a different level of infection rates.  The UK is now recording four times the average daily increase in infections than it was recording in the first wave. In France and Belgium, it is about 10 times, Spain about 2.5 times, Austria about five times and so on.

Italy recently reported 38,000 new cases in one day whereas in the first wave it only got to around 6,000.  The Czech Republic reported daily infection rates in the low hundreds in April, but now it is reporting 12,000 to 15,000 new cases a day. Even Germany is now reporting three times the daily number of new infections than it reported in the first wave. Germany’s intensive care units are getting towards 75% full but part of the reason for that is that it has been helping Belgium by taking some of its patients, particularly in the border region.

If a mutated strain were to take hold on the human population, the waves we have experienced may continue to be a part of our lives with its dire implications for health systems.

It is not just health systems that are affected.  We now see the impact of lockdown measures on food supply chains.  Poorer people of many countries are now suffering from under nourishment, even starvation[6].  In many low-income countries, the poorest must work each day to be able to afford to eat each day. But if their country has tried to lockdown to reduce the spread of the virus the poorest cannot work.  There are many examples close to Australia: India, Indonesia and the Philippines, where the proportions of the workforce that are in the informal sector are so high that the authorities have no way of getting nutritious food to them if they cannot work.  The implications of this on long term population health are still evolving.

Brent is Principal at Brent Walker Actuarial Services Pty Limited. Before he retired, Brent had over fourteen years of management experience in the life insurance industry, ten years in the health insurance industry and over 35 years actuarial consulting to the health industry. He has been involved in advising The Australian Commonwealth and State Governments, health insurers, life insurers, friendly societies and retirement villages. He has also undertaken many international assignments in Europe and Asia. Brent is a past chairman of the International Association of Consulting Actuaries.

How do individual risk perceptions impact citizens’ willingness to adopt the COVIDSafe app?