Almost three million new cases confirmed globally in a single week as cases surge around the world. Meanwhile only 32 cases of locally acquired cases in Australia in the last week, comprising 27 in Victoria and five in NSW. The US experienced 20% more deaths than expected during March to July, with two thirds of the excess documented to be from COVID-19. If the US death rates were comparable to Australia, the US would have had 187,661 fewer COVID-19 deaths in this period. And the antiviral drug Remdesivir has been approved by US FDA for treatment of COVID-19 requiring hospitalisation despite lack of evidence supporting its effectiveness. 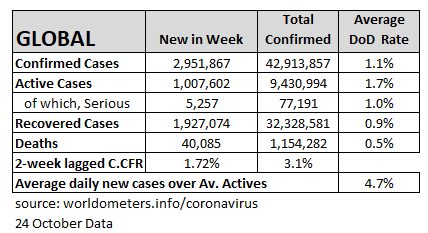 How many ways can you say ‘Ugly!’?

Against that, although deaths rose, as a percentage of two-week lagged new cases they fell to a new low of 1.72%, the 6th week of a continuing pattern of falls.

Overseas traveller cases were higher largely due to 24 cases in crew members from an international vessel (the Al Messilah) included in the WA total.

Locally acquired cases were again only recorded in Victoria and NSW:

Single cases were linked to four existing clusters.  There were also two cases in people who have previously tested positive, with these being investigated to determine whether they are reinfections or shedding of old virus.  One case remains under investigation.

The Victorian DHHS issued this statement acknowledging that there is the potential for aerosol transmission of COVID-19, and requiring P2/N95 respirators for healthcare workers treating COVID-19 patients in Victoria.

Jobs & Business. Unemployment rate increased marginally to 6.9% in September (6.8% in August). Payroll jobs are still 4.1% below mid-March levels nationally (Victoria 8.0%). The number of jobless families has increased in 2020 with more than one in five families having all members (aged 15+) being unemployed, according to the ABS. Meanwhile, ABS survey results show fewer businesses reported a revenue decrease in October (31%) compared to July (47%). The Australian Business Growth Fund (BGF) has been formally established, jointly funded by the Government and major banks, it will operate commercially and make investment decisions independently of the Government.

ASIC. ASIC’s annual report includes its response to COVID-19. The expectation on general insurers with regards to handling business interruption claims brought by small businesses have been set in a letter from ASIC. Conditions have also been imposed on the issue and distribution of contracts for  difference (CFD), where retail client accounts of the sampled CFD issuers made net losses of $774m over the five-week period from 16 March to 19 April, amid heightened market volatility during the pandemic.

APRA. APRA’s annual report observes the financial services industry has held up well during the pandemic, despite a number of significant challenges arising from the pandemic. The Early Release Initiative (ERI) data collection and COVID-19 Pandemic Data Collection (PDC) have been updated, with some data collection being discontinued from 30 September.

AFCA. The temporary additional nine days firms have had to respond to complaints will end on 1 November.

Fewer trauma admissions during NSW lockdowns. This pre-print paper showed that during COVID lockdowns between March and May, trauma admissions, severely injured patients, intensive care admissions and deaths at a major NSW trauma hospital were lower than previous years. There were no significant differences in mechanism of injury.

Excess Deaths. The U.S. experienced 20% more deaths than expected from March through July 2020, with two thirds of the excess documented to be from COVID-19. Excess mortality in the US is higher than 18 other OECD countries. If US death rates were comparable to Australia, the US would have had 187,661 fewer COVID-19 deaths. A separate study of 21 countries in Europe + Australia suggests excess deaths from Feb-May were as high as 37% in England and Wales and 38% in Spain, while 9 countries including Australia and New Zealand had less than a 5% increase in deaths and in some cases declines.

Trial will intentionally infect humans. In January UK scientists will launch a human challenge trial  to determine the minimal amount of SARS-CoV-2 needed to cause an upper respiratory tract infection.

Rapid testing moves closer to reality. In a study supported by the Dutch government, a new technology, DETECTR, which has a turnaround time of 30 minutes, had comparable sensitivity and superior specificity to standard PCR testing. Reviews of other rapid tests show mixed results in this pre-print study.

Treatment approved despite lack of evidence. The U.S. Food and Drug Administration approved the antiviral drug Remdesivir for treatment of COVID-19 requiring hospitalisation. It is the first COVID-19 treatment to receive FDA approval, having previously received emergency use authorisation. This is despite interim evidence from the WHO’s Solidarity trial that suggest neither Remdesivir, Hydroxychloroquine, Lopinavir nor Interferon are effective in reducing mortality, ventilation and duration of hospital stay. Indeed, in what was a fairly depressing week for news on treatments,  Convalescent plasma and Tocilizumab showed no clinical benefits in trials of patients hospitalized with moderate COVID-19.

Humans can infect our pets. Researchers have shown both cats and dogs can be infected with SARS-CoV-2, but did not develop significant clinical disease. Cats could also spread the virus to other cats.

Make Actuaries Generate Analytics: A serial Twitter analysis for the 2020 US Presidential Election by YDAWG Analytica