In an incredibly moving session, Peter Mulquiney and Alan Greenfield, actuaries at Taylor Fry, shared the power of applying an investment approach to government expenditure.

The context was a sobering report delivered to the NSW Government in 2015 by David Tune (Former Secretary of the Commonwealth Department of Finance) who found worsening outcomes for children in foster care, notwithstanding greater funding over the previous decade, and that insufficient effort had been directed to prevention of future cases. The NSW Government responded with ‘Their Futures Matter’ (TFM) reforms, underpinned by the concept of the investment approach with streams related to data and modelling, innovative system and service responses, and monitoring and evaluation. Taylor Fry assisted TFM build the data and investment model.

The investment approach is steeped in evidence and data and that is what Taylor Fry drew upon to provide the modelling.  Specifically, the investment model and its output help government to prioritise which investments, in terms of programs and interventions, to make in a budget context and to evaluate the investments that have been made.

“It’s a predictive model and it makes forecasts of life pathways and outcomes for all children in New South Wales,” explained Peter.

Importantly, those pathways consider cross-agency outcomes because it is known that vulnerable children have poorer outcomes across multiple agencies, including education, justice, health and child protection. It also considers not only outcomes in childhood and young adulthood, but up to late adulthood because many of the benefits from prevention carry through for a very long time. “If you want to do a true cost benefit analysis of any prevention work, it needs to consider both those short-term outcomes and also the longer-term outcomes.”

Constructing the dataset on historical individual anonymised pathways took up a large part of the project time. It required pulling together data on services an individual had used (such as in child protection, housing, health and education) and what life outcomes had been attained (such as educational or health milestones), as well as their parental risk factors (such as interactions with justice and perinatal factors) given the feedback link these have to the child’s outcomes. This was done for individuals born in NSW from 1990 onwards on a quarterly basis from birth up until mid-2017, using NSW data supplemented by some Commonwealth aggregated data. Creating this comprehensive linked dataset of about 3 million historical pathways was one of the major achievements of this project.

Standard machine learning approaches were then used to identify the most reliable and strongest predictive factors as well as key patterns in the data. Generalised linear models, such as logistic regression models and multinomial models, were then used because they are relatively easy to control for changes in assumptions and to extrapolate and they are relatively easy to explain to clients which is crucial for project buy-in. All up, about 80 sub-models were built to describe the pathways.

“One of the key uses of the model is as an input into cost benefit analyses. If we know what the cost of a particular vulnerable group is to the government and we can estimate what the savings to those costs will be if we introduce a new program, we’re able to build a business case around that and use the model to give an evidenced-based backing to that business case,” observed Peter.

Microsimulations were then done to make projections for individual children. There is obviously uncertainty as to what any one individual’s future pathway will actually be, but microsimulations provide the likely range of outcomes for different groups, and enable comparison between groups, absent policy changes. With enough microsimulations, and the Taylor Fry actuaries ran millions, high confidence can be had in the model output.

Finally, a lot of back testing was done as part of ensuring model reliability.

Alan described the model output at the aggregate level as “In total it’s about $300 billion dollars for services up to age 40 for this group of people.” 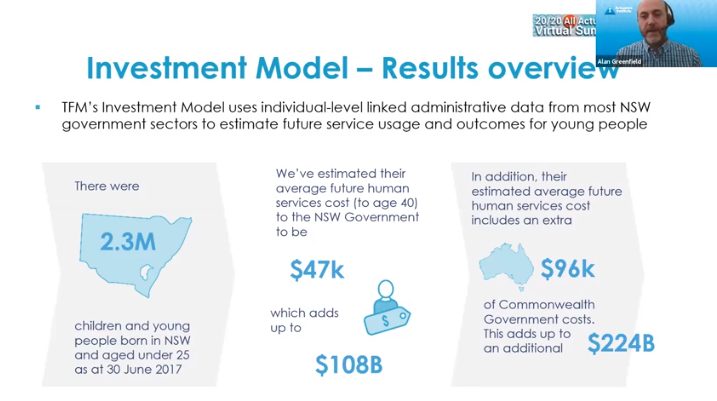 There are similar findings at specific sector/agency level. For example, just 1 per cent of those young people will make up a third of the future NSW justice system costs and, although not necessarily the same group, 1 per cent of young people will also make up nearly half of NSW child protection system costs. “Concentration and vulnerability is evident across each of the different sectors,” remarked Alan.

Of the more than half a million children aged under 5 years in the study population, 160,000 were identified as vulnerable – they had one or more of a variety of perinatal and parental risk factors.

Among this vulnerable group, the analysis revealed five indicators associated with young children having poor outcomes later in life (namely, parents have interacted with the justice system, mother smoked during pregnancy, child had a ‘concern report’ with child services, the mother was aged 21 years or less at the time of the child’s birth, and parents had been in social housing).

Of the 160,000 children identified as vulnerable, 90,000 had at least one of those five indicators and about 1,000 had all five indicators. Without policy interventions, the future is very concerning for those children. “From my perspective, none of these children have done anything wrong yet … and yet there are such stark outcomes for this group that we all need to take stock and somehow we need to do better in society,” implored Alan.

For example, “We can say that half of the boys in that group will go to jail and they are not five years old yet”. Other outcomes will include high rates of pregnancy at a young age for the girls and low education completion rates for both genders. “I used to tear up presenting this slide … it still makes the hair stand on the back of my neck,” remarked Alan.

The output can also be cut in other ways, such as geographically, to further understand concentrations of vulnerability. Such a view reveals heavy concentrations in western NSW in particular.

Drawing on this work the NSW Government is focusing on vulnerable children aged 0-5 years as well as children and young people aged up to 18 who are affected by mental health issues.  (Taylor Fry also did modelling on this latter group and findings, which are equally stark, are also detailed in the report.) These groups are being focused on because they have the greatest potential social returns from investment and align with current government initiatives. Effective policy interventions will change the projections for later in life.

For interested readers the Taylor Fry report to NSW Government is available here.

Peter’s top tip for any actuaries wanting to get into this line of work is to develop strong communication skills to effectively engage with a wide range of stakeholders, many of whom do not know what an actuary is, in layperson terms. He added, “it’s not hard to find the motivation to do the work.”

A recording of the session is available to view for registered 20/20 All-Actuaries Virtual Summit attendees on the app.

Under the Spotlight – Naomi Edwards (Councillor)

Abstracts 101: How actuaries craft their submissions