In this part 2 of a two-part series, Colin Grenfell, of the Institute’s Superannuation Projections and Disclosure (‘SPD’) subcommittee, continues his assessment of the following hypotheses:

First hypothesis: “The impact of fluctuations in investment performance on benefit outcomes for members of defined contribution superannuation plans can be significant”.

Second hypothesis: “Setting the Superannuation Guarantee (SG) at 9.5% or 12% will only provide adequate superannuation benefits if you either work a lot longer than 40 years or if you benefit from above average investment performance.”

To illustrate the second hypothesis above, we are comparing three lifetime projections:

First, we will consider the allocated pension minimum drawdown (MDD) rules, summarised below: 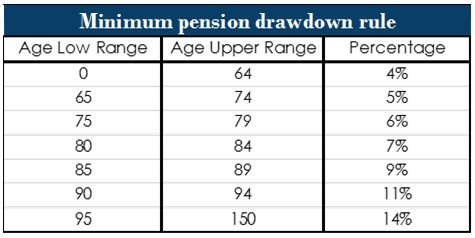 When the MDD applies drawdowns have to be increased. This increases benefits to above the target 65% replacement level but also brings forward the eventual date when the account balance runs out.

The impact of MDD is most significant for higher contribution cases with higher account balances as a result of good investment experience. This is because the minimum drawdown requirement then is more likely to be higher than the targeted income drawdown needed. The following is a summary of the extent (in years) by which the date of running out is reduced for the 600 scenarios.

Many retirees will be entitled to receive the means-tested Age Pension either at retirement or, if not at retirement, at a later date when existing assets are consumed and start to run down. For the 600 members being compared in 1, 2 and 3 above, including the Age Pension will extend the eventual date when their account balances run out – the opposite to the effect of the MDD. For married couples, (assuming the spouse has the same assets as the retiree and is also eligible to receive the Age Pension) the following is a summary of the extent (in years) by which the date of running out is increased for the 600 scenarios. It is assumed that the homeowner limits apply and that the targeted income level is not changed.

Note that these results are specific to the case study with a salary of $100,000 and a replacement ratio of 65%. The impact of the Age Pension will be very different for members with different salary levels and targeted income levels. With these qualifications, the following table summarises the results after allowing for the Age Pension and the MDD.

This summary indicates that with the SG at 12% of salary plus 3% non-concessional from members (and allowing for the Age Pension and the MDD) we still have only 67 of the 200 members with a positive account balance at age 90 and able to continue withdrawing their target income (i.e. $65,000 in wage-adjusted today’s dollars). Does this indicate that even higher contributions are required?

“Age 100” (i.e. 65 + 35) might be an appropriate planning horizon, if allowance is made for “25 year” improvements, for a married couple to be 80% confident that their income will last until the “second death”:

With the replacement benchmark retained at 65% of final salary, Figure 9 below indicates the results (allowing for both the Age Pension and the MDD) for different salary levels.

Please click this figure to view in full size.

The colour code adopted is:

Figure 9 goes a long way to justifying the second hypothesis posed at the start of this article, but before reaching firm conclusions the SPD is planning to publish a follow-up article which will examine alterative adequacy benchmarks.