Alex Stitt returns to the blog for another update on COVID-19 data from around the world, risk management, current social distancing measures and the baked bean apocalypse.

While you were all stressing over loo paper, my mind was on a much more serious issue – would the supply of baked beans hold up?

On one of my forays into what we all now know as ‘Corona-land’ (aka the supermarket), I was met with completely bare shelves. Well, not quite completely bare. There was one sad 110 gram can left on the shelf. It was ham sauce – reason enough for it to be abandoned (no one likes ham sauce. Why do they even make it?) – but the real cause of its abandonment was its shape. Everyone recognises that U-shaped cans of baked beans are bad karma. Even if they aren’t ham sauce. I kick myself now for not photographically chronicling this sad state of human affairs. Shortly after I also kicked myself for not buying it. If the last can of baked beans on earth is a U-shaped, 110 gram ham sauce can, then please let it be me who wins that prize.

Days later, my worst fears were stoked. At a different Corona-land it was the same story. Panic buying had stripped the shelves, but for one last foot-soldier. I rescued it. 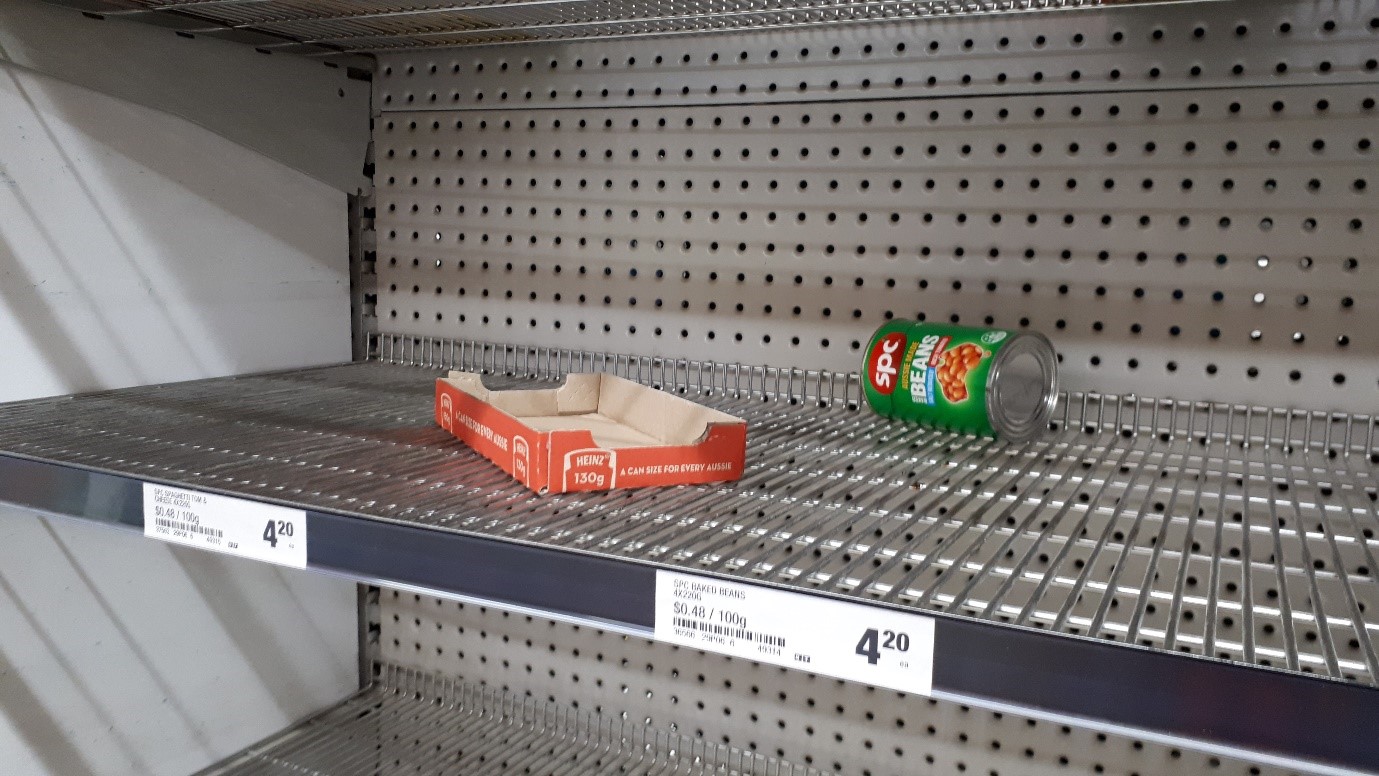 But this tale has a happy enough ending. That was 23 March. By 4 April, it wasn’t nirvana again but it was way better. 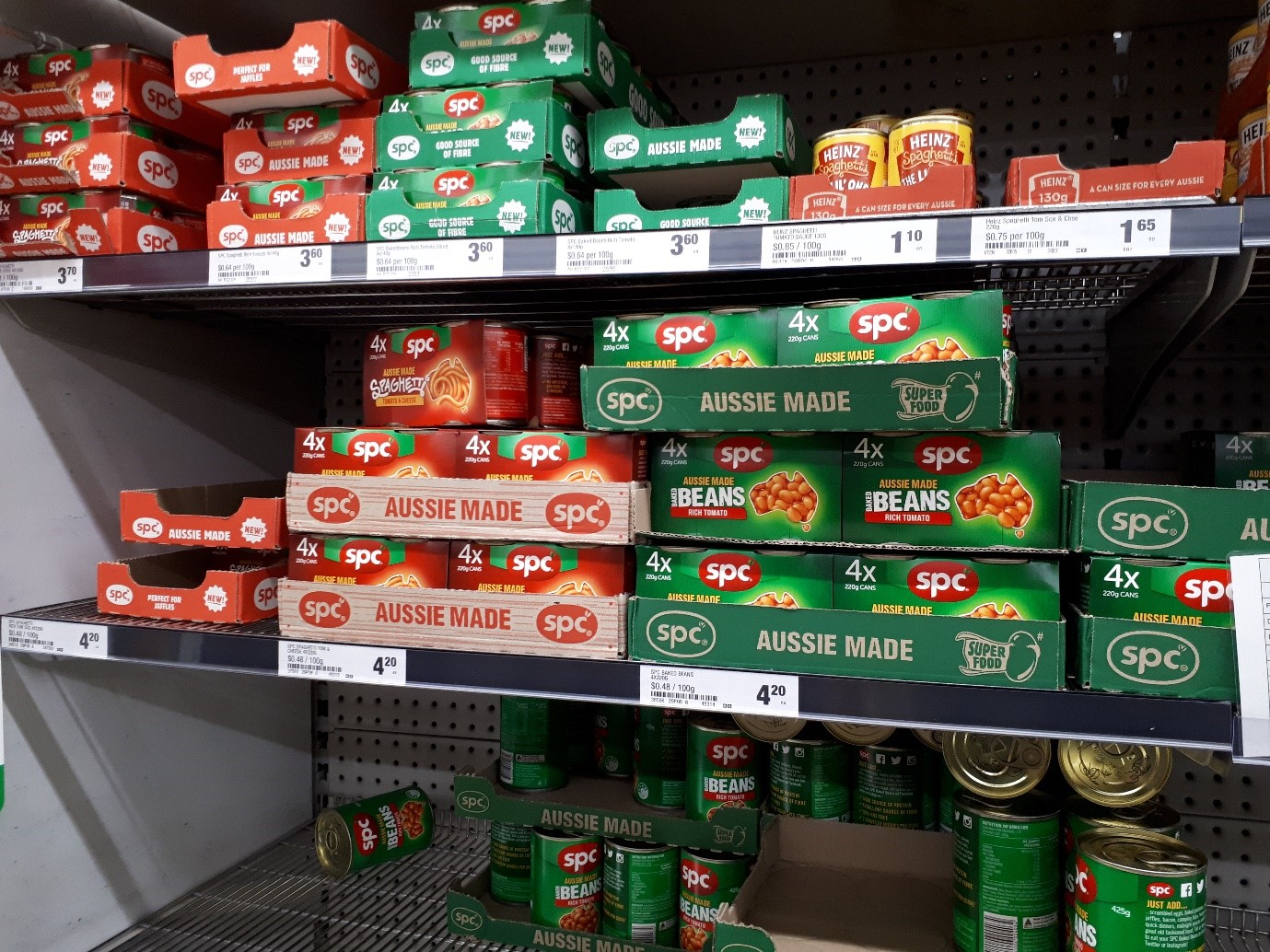 I won’t share with you the looks I got while taking these photos.

People who know me, know I like to get in my metaphorical “helicopter” to rise up above all the detail and see the broader picture.  For this pandemic, even the helicopter won’t suffice, so I’ve metaphorically hitched a ride on the International Space Station to see what’s happening.

It’s also taken me a few days of trial and error to come to some view that I think helps me to see what is happening, as opposed to the many views I’ve tried that bamboozled me with numbers and ratios. 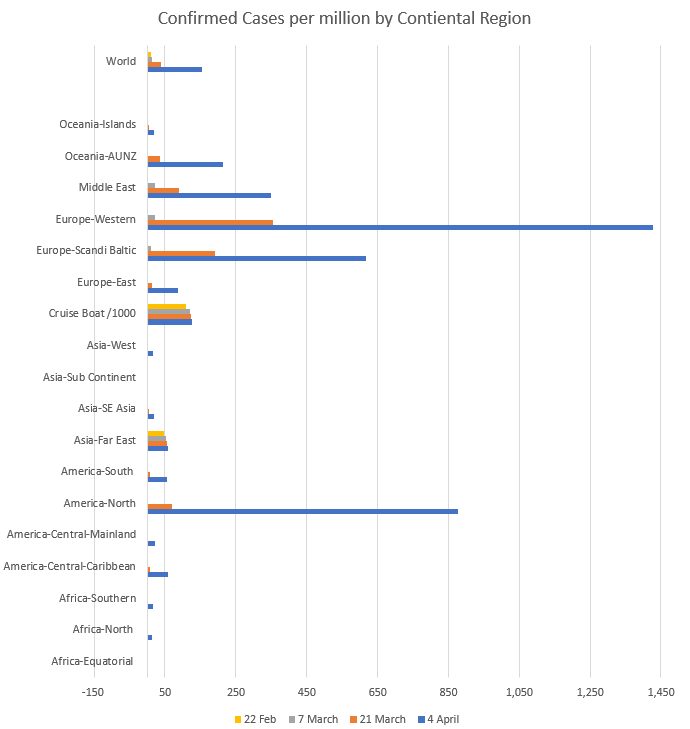 Note that the Cruise boat infection rates have been divided by 1000 to stop them swamping the chart, and that I‘ve not tried to re-base the Cruise Boat population date-by-date. It’s all based on the 4 April number.

Population numbers used are in the table below, for reference. 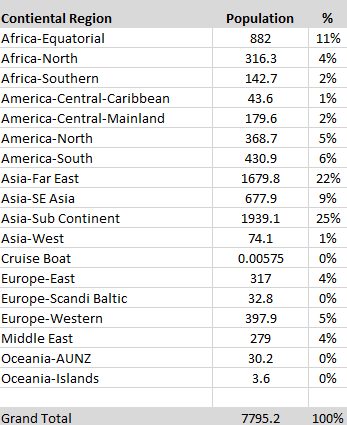 Having initially been starved for data, we are now starting to drown in it. This section lists some interesting new resources that have come on-line since 27 March which may be relevant to you.

The intention is that the more useful of these will get integrated into the AI Pandemics Resource Centre shortly and that some of the practice areas, or individual practitioners, will extract the important messages in them:

New York City Health Department Covid data. This is a rich resource for health, morbidity and mortality data – just not all that neatly laid out for actuarial purposes. The landing page summary graphs are interesting, but the real gold is in the data downloads.

South Korea CDC Daily Updates. Information provided changes substantially day by day so you need to trawl. The 1 April press release had a wealth of information including decadal age-specific death rates from 9887 cases. Of note, the sex specificity of cases and deaths in South Korea is radically different to that in the UK.

The 17 page ICNARC (UK) report on 2249 patients critically ill with COVID-19 is a tough read, on many levels, but gives useful insights into disease ethnicity, sex, age and co-morbidity characteristics as well as some very sobering prognoses for the critically ill, from a non-trivial sample of 2249 critically ill.

Together with the China and Italy data previously reported and the assumptions of the Imperial College in London, you should now have a wealth of data in this domain.

IHME in Seattle, Washington produce USA national and by-state projections of projected US hospital needs and deaths. And in this fast-changing world, they added much of Europe overnight. This resource predicts the peak hospital load and deaths in all the locations modelled.

The NZ Government has released their modelling of potential COVID scenarios that have informed their national response. Given broad similarities between Australian and NZ, it is feasible to take this modelling and adapt it to Australia. The following table outlines assumptions and outcomes. 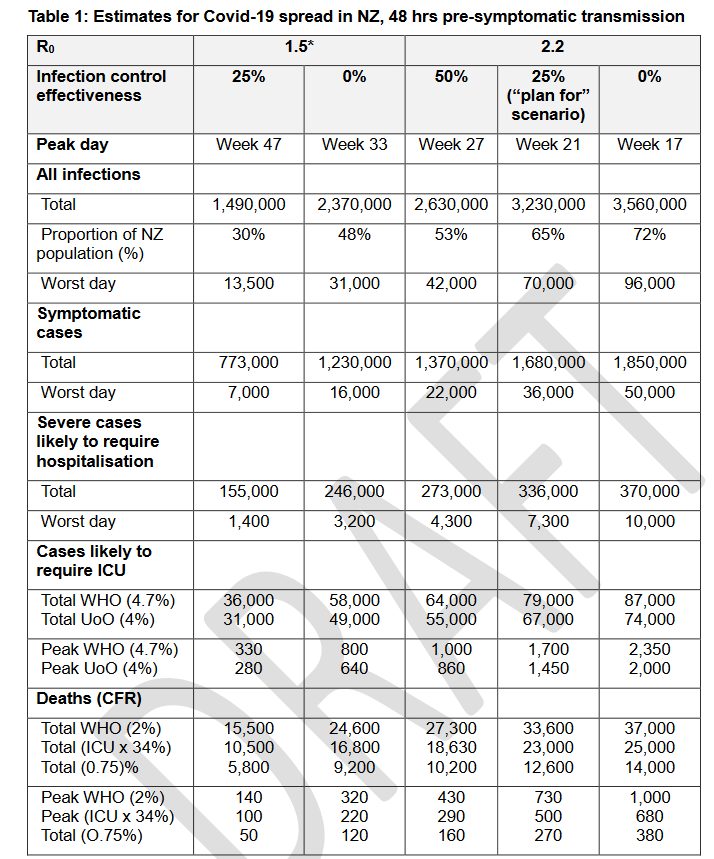 The Australian government has released a general overview of the non-Australia modelling they have had done, using 4 scenarios, making the point that without extreme action, our health system would have been overwhelmed. You may find the assumptions on infection rates and hospitalisations of some use.

I’ve not seen any cogent advances on modelling the economic impact, either globally or for Australia.

The share market, both here and overseas, seems convinced there is no more significant bad news to come.

Several colleagues suggested it was worthwhile revisiting some of the information in PANDEMIC 2006, particularly the Risk Mitigation and Management Strategies in section 14.

First a chart that was not in the paper but was used in presentations on the paper.

The question mark for general insurance is because it very much depends on the lines of business written.

Section 14 of PANDEMIC 2006 first of all addressed individual mitigation and management, but you’ve probably heard “Wash your hands!” and “Keep your distance!” a thousand times now so I won’t repeat them. Carefully nursing the ill was the third main message for individuals.

For organisations, I’m mainly going to point you back into section 14 of PANDEMIC 2006 with just these teasers:

OPERATIONAL RISK: Know your critical functions. Know your key staff. Know your supply lines and their weaknesses. Have plans for all of these. Communicate with your stakeholders (staff, customers, markets, regulators). Be responsible for the health and safety of your staff and on-site customers. If you can, have “distributed” work, best exemplified by “Work From Home”.

LENDERS CREDIT RISK: Ration lending as needed. “What if” alternatives to calling in distressed loans. “What if” ways to help your debtors manage, including helping them avoid infection. Communicate with your stakeholders, especially your debtors (or your creditors if your business is the borrower). Know your overall book and where the pressure points are. This is particularly relevant given the differential impacts of this crisis on various industries.

INSURANCE RISK: Communicate with your insureds. “What if” ways to help them either avoid a claim or reduce the amount of claim. Make sure you are modelling the potential impacts on both profit and capital. Communicate with your regulators. Find creative ways to re-capitalise if that becomes necessary.

MARKET RISK: Don’t be caught by surprise. Know your direct and implied options exposures. Understand the longer term prognosis, which is expected to be much less severe than the immediate impact. Give yourself as much flexibility to move positions or hold positions as you can.

COMING OUT OF THE BUBBLE / HIBERNATION / LOCKDOWN

Have you all caught up with the brilliant phrase the Kiwis are using to communicate social distance and their lockdown – your “bubble”. Inside your bubble you live as normally as you can, but you don’t let any outsiders into your bubble and if you have to go outside it (as we do) then take all the necessary precautions to make sure you don’t bring Corona back into your bubble.

A day or two ago, it might have felt very premature to begin talking about coming out of our bubble, or hibernation or lockdown. But now we even have the NSW Premier foreshadowing the possibility.

It happens that my University peer group of actuaries have been bouncing around some thoughts on this topic for a time and so it’s timely to start discussion on the subject.

There’s a spectrum of actions we could take, bounded by two extremes, as in the diagram below.  Just to be clear, the extremes are probably unacceptable to most societies. 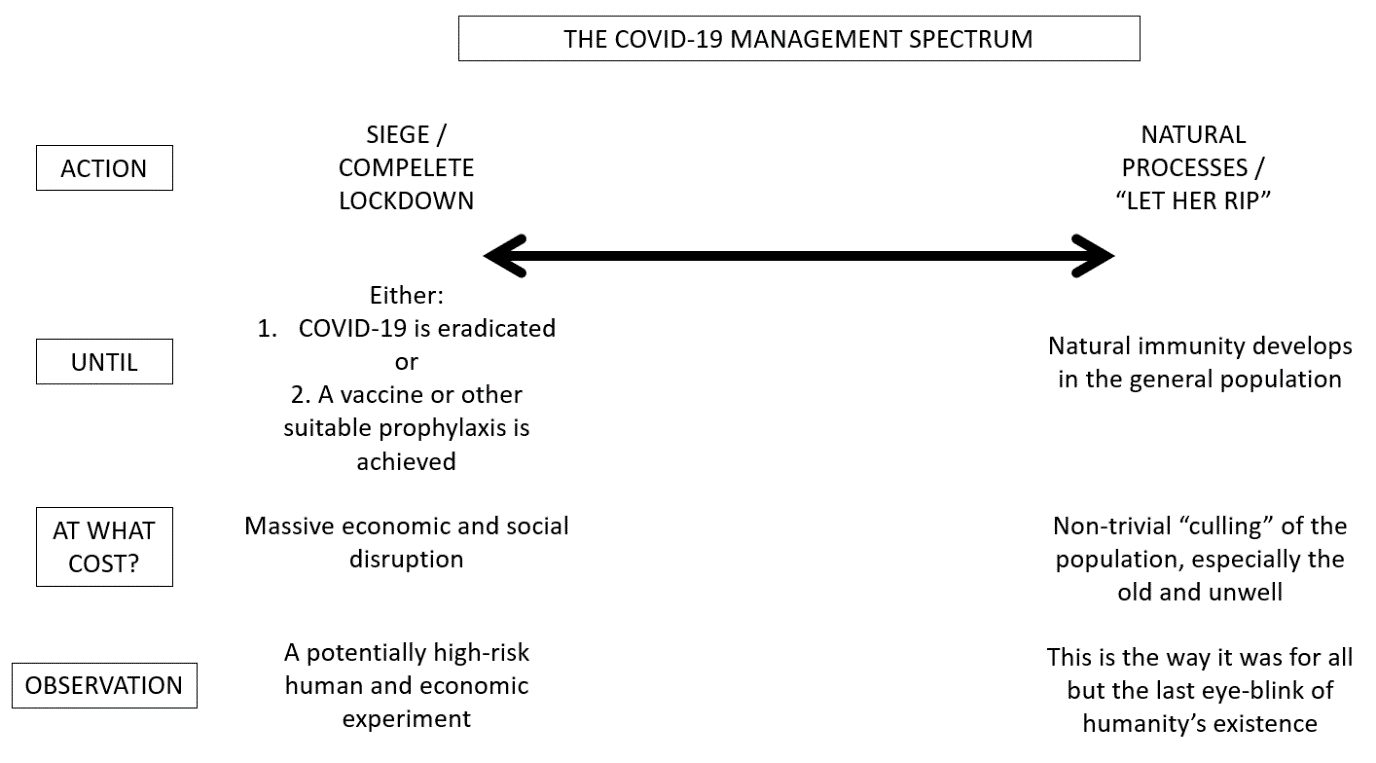 In practice, many societies, Australia and New Zealand included, have elected to place themselves noticeably to the left on this spectrum, but a long way from the extreme left.

It’s probably also fair to observe that these societies’ choices have been vindicated. Where the decisions have been taken early enough and the “corralling” of COVID-19 has been strong enough, death rates per million have been demonstrably lower than where the elections were made later and / or the corralling less effective.

For further framing of the issue:

So then, how best to come out of our current semi-locked down state becomes the matter for discussion?

I don’t have answers, but I do have some points of view:

Many minds bring more perspectives and creative alternatives, so I’d love those of you who have thought about this issue to join the conversation and help us, together, craft clear thinking on the best way to get us back to normal without inducing a “cull”.

I’m going to quote Dr Jagadish J Hiremath for my last words today. He runs a hospital in the industrial area of Bangalore, India. I’ve taken my quote from a report in the SMH of 6 April.

He highlights the world’s structural inequalities – inequalities that will shortly make devastating demands of those least able to meet them. 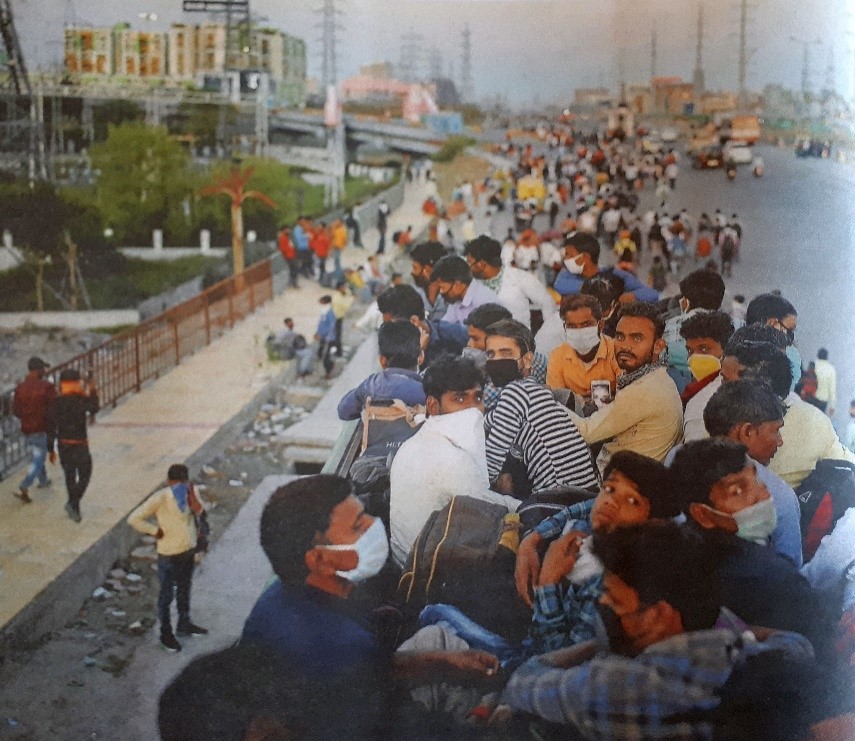 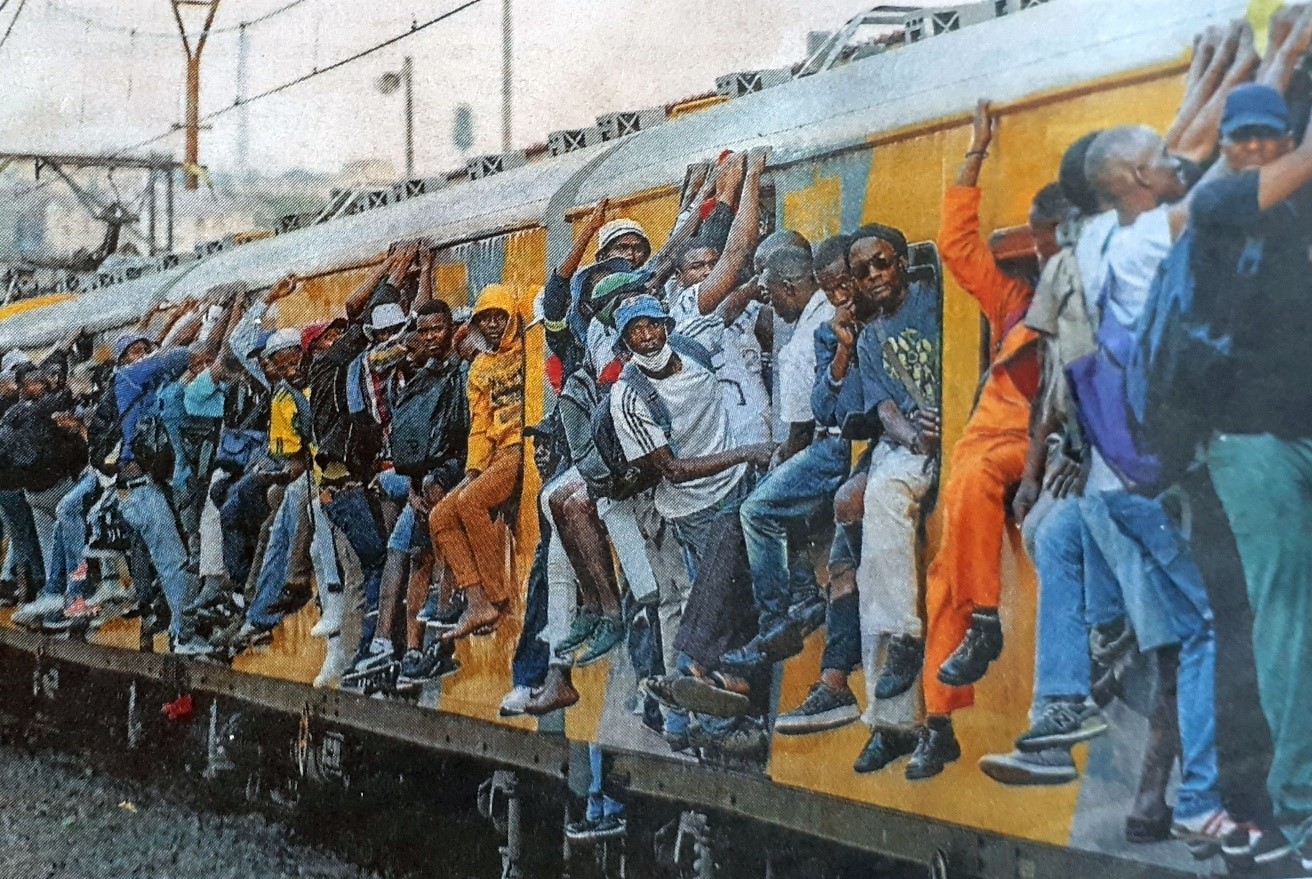 Source: Both pictures from the SMH article quoted. The first is Delhi, India: Workers being bussed home to their villages for the lockdown.  The second is Soweto, South Africa.  Let me draw your eye to two things in this last picture beyond (by my count) 39 people hanging on the outside of a train just to get home. How many pairs of bare feet do you see? How many people travelling between the two carriages?

Very interesting topic, thank you for putting up.