It is a hollow victory to produce a model that forecasts deaths well, but Douglas Isles’ simple, reductive model for the coronavirus pandemic is proving to be relatively accurate at present.

My personal interest in this area stems from being numerate, and having been shocked by a crowded Bondi Beach on Friday 20 March (my photo attached), after it was clear from the data that COVID-19 was a serious problem facing the world. Australians were treating “work from home” as a chance to soak up some later summer sun, in close proximity. My initial goal was simply to bring the risks to the attention of the Australian public, using my own network as a starting platform.

The motto I have been using throughout this period has been “spread data, not the virus”. Here I explain the workings of my simple model, and the output and forecasts it produced.

Given there is a lack of consistency in testing around the world, and only low levels of populations are being tested, the model I developed used reported COVID-19 deaths (per worldometers.info) as the most useful data point out there.

I made the following simple assumptions:

The key variable in the forecast then becomes the forecast TR from 20 days ago, to now, and beyond. There are other issues around whether death data is reliable, but they are beyond scope of this quick summary.

Last weekend the model was forecasting 31,991 deaths globally, and today in assessing its performance there were 31,806 (over-estimate of 0.6%) excluding 2,028 deaths in France that were revealed to have been previously unreported.

The  key variable of transmission can be looked at a global level of actual vs forecast in this chart:

The county groupings for the model, looked at 13 specific countries in four groups, and then other.

The forecast deaths by group versus actual for the last week, can be viewed here:

Looking forward, the model is shared, in this table so the assumptions are clear. For the Other group, which is not explicitly model, I share the TR for Sweden (the country eschewing lockdown), Australia (my home country), and three Emerging Nations, which could be places to worry about. 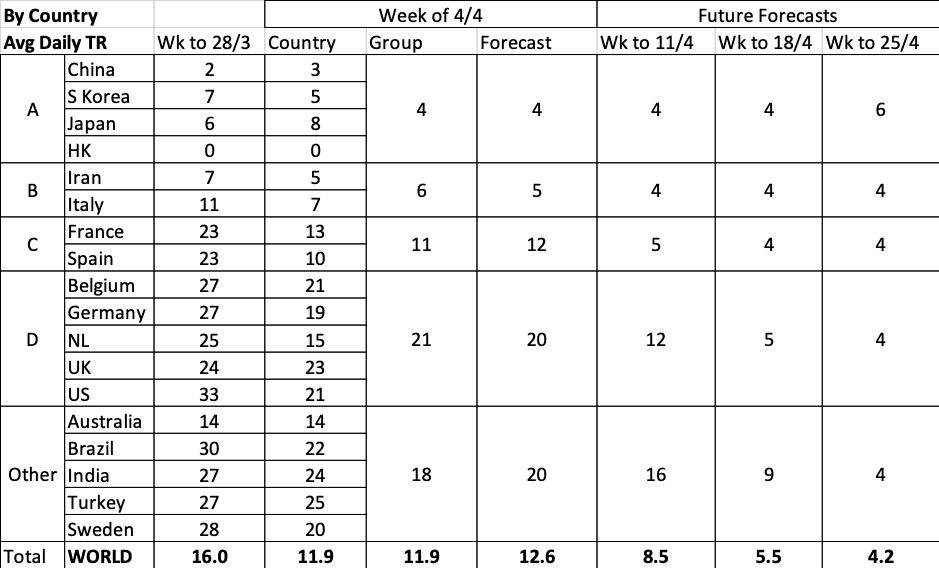 The totals at future points in time are here:

The model expects Group C to peak on Sun 5th, Group D (which includes US) to peak on Fri 10th, and “Others” on Mon 13th. The risks to these revolve around a primitive assessment of lockdown effectiveness.

While the political motivation to demonstrate this in the aftermath of a crowded Bondi, has diminished with our nation in lockdown, the key reason I now bring it to people’s attention is to be emotionally prepared for the huge number of deaths we have to deal with seeing on our TV screens in the next few weeks as we go through this peak.

The next difficult questions, absent approved therapeutics, are going to be how we get the world back to work. Juggling economic, social, political, medical and ethical drivers will be a challenge, along with nationalism versus the fact this virus will not respect human borders. Modelling exponential growth from any point shows terrible outcomes, but the medical industry is working its hardest to change these, while the lessons of social distancing, self isolation and greater hygiene, may also act to help slow any future spread. Tough times ahead, but together we can fight to win this war.

Douglas currently works as an Investment Specialist at Sydney-based Platinum Asset Management, where he has spent a total of 13 years in two spells. Born in Edinburgh, Scotland, he has a MA in Mathematics from Trinity College, Cambridge, graduating in 1996, and he qualified as a Fellow of the Faculty of Actuaries in 1999 and became a fellow of the Actuaries Institute of Australia in 2019. He has previously worked in Edinburgh and Singapore, and been in financial services for his entire career to date.

Hi Douglas, you might get a better predictor for your group B if you leave out Iran. If you look at their data, you will see that it doesn’t really make sense - it is too “smooth” (ie not enough natural random volatility) and the peaks in timing of diagnoses vs deaths don’t make sense. I don’t think the data is real. Karen