Australia’s favourite scientist, Dr. Karl Kruszelnicki, praised actuaries for their ability to see patterns in the data, recognising the impacts of smoking and of climate change in particular.

Dr. Karl gave a jam-packed, wondrous Keynote speech to around 500 actuaries and insurance professionals at the Actuaries Summit in June 2019. 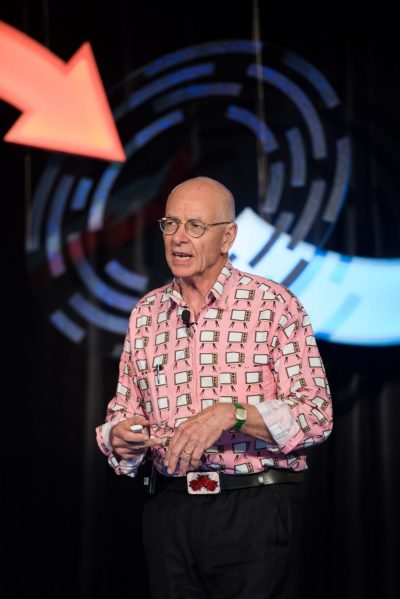 A few months later, the quirky scientist, Triple J radio-host, qualified doctor and engineer, received the 2019 UNESCO Kalinga Prize for the Popularisation of Science in recognition of his longstanding commitment to fire up people’s curiosity for science and share his passion for the subject.

In a fast talking chat that ping ponged from global emissions, to running for politics, to peace, war, technology and several book reviews, I tried to keep up with Karl.

Listen to the podcast below, read the transcript, or read on here for a breakdown of the conversation …

He gave kudos to the actuaries for their long term view and ability to see patterns in the data:

“I remember reading in 1974 in the New Scientist how you guys had said that this greenhouse effect was probably real but dammit or not you were going to factor it into your insurance premiums. On the same grounds that you’d seen that if people smoked cigarette they would it reduce their lifespans. And you guys saw it before the medical doctors did. It took the scientists another 15 years or so…they needed a higher burden of proof… So you guys are very good at seeing stuff, thank you.”  – Dr Karl

Climate change in the numbers

Dr Karl said climate change had been deliberately politicised by the big fossil fuel companies behind the scenes and those who see the numbers or costs “are now telling us it’s real”.

“I have no idea why we don’t listen to them,” he said, calling on others to take up the opportunity to do good by running for politics, as he did in 2007.  Actuaries Martin Mulcare (ran for Bennelong, NSW in 2016) and Helen McLeod (ran against Josh Frydenberg for Kooyong, VIC) in 2016.

On the day I spoke to Dr Karl, 4 June, icy winds and torrential rain were lashing Sydney. Snow had fallen in parts of NSW and Queensland. There were delays and cancellations on roads, rail, waterways and at airports due to the extreme weather, and Dr Karl questioned how much economic loss was being factored in.

Fast forward five months: bush fires are raging out of control, closer to communities across NSW.

Actuaries, who have been grappling with climate risk for some time, are now discussing how mitigation and insurance can play a role in closing an emerging ‘protection gap’.

Dr Karl pointed out that China seems to be taking a ‘long term view’ with regard to technology, emissions and social credit.

“They’re covering a whole lot of stuff but it’s all long term and there are lessons to be got by looking at China…to see what they do and why and is that a good pathway for us or not,” he said.

“The greatest advantage actuaries have is access to lots of data from the past and the ability to analyse it in a way that’s relevant for the society today. The short term, small goal is that they make money and they have a profit and they stay in business over the next few generations, but…

…long term they’re giving us a snapshot of our society day by day, month by month, year by year, decade by decade, going back over generations.”

The impacts of climate change on life insurance and retirement incomes