“The Index is a great example of how actuaries can analyse data to ensure important and complex public policy issues are worked through objectively” – Actuaries Institute President Nicolette Rubinsztein.

Temperature extremes continue to increase in Australia as shown in Figure 1 as the summer of 2018/19 delivered record levels of the high temperature index.

“The most recent Summer has been the hottest on record, both in terms of average temperatures as reported by the Bureau of Meteorology and in terms of the frequency of extreme temperatures as measured by the Australian Actuaries Climate Index,” said actuary Tim Andrews, who led the development of the index.

This has contributed to the relentless heatwaves and damaging bushfires experienced by Australians across the country.  The Bureau of Meteorology predicted this summer’s hot weather and reported it would be driven by a combination of the “long-term increasing trend in global air and ocean temperatures” and the El Niño weather conditions.  These warmer and drier than average conditions have continued through the autumn of 2019 and the Bureau of Meteorology, in their latest seasonal outlook, has predicted more of the same for the Winter of 2019.

The index also shows clear evidence of the sustained rainfall events that caused flooding in North Queensland as well continuing issues of drought being experienced in central NSW as shown in Figure 2. 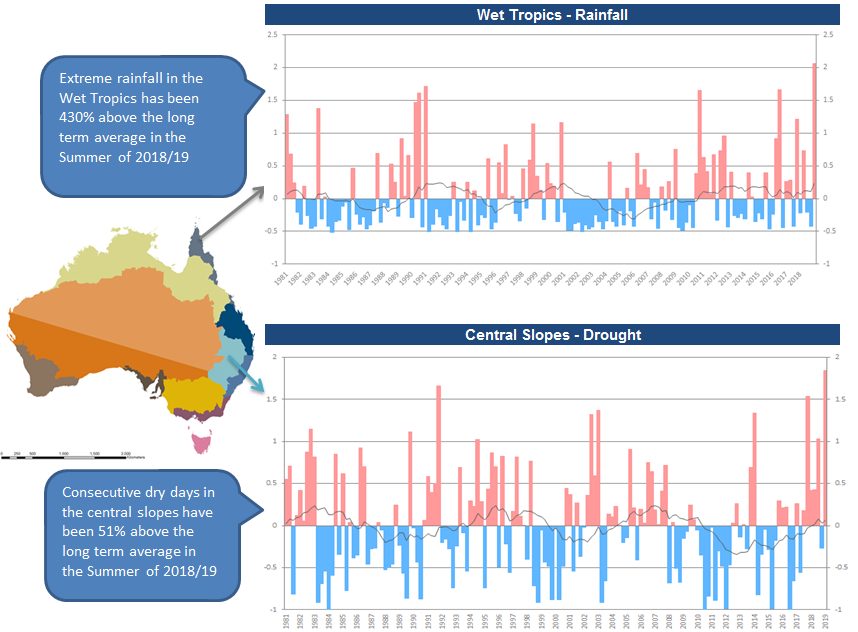 1260mm of rainfall was recorded in Townsville, smashing previous records, as a slow-moving low pressure system dumped rain for an extended period in late January and early February. Estimates consider the floods to be much rarer than a 1-in-100 year event.

“The attribution of individual events to climate change is challenging to assess due to high levels of natural variability, but the Townsville event is consistent with expectations for rainfall intensity to increase,” Mr Andrews said

He added that despite heavy rainfall in Australia’s north, there were significant parts of NSW and Southern Queensland experiencing extremely dry conditions during the Summer months. The fish die-offs in the Murray Darling basin in December 2018 and again in January 2019 were also indicative of the extreme dry conditions.

The Index is collated at the end of each season following the release of data by the Bureau of Meteorology.

The data is collected nationally and grouped into 12 climatologically consistent regions.

The index and its components have been constructed to generally record extremes as any reading at or above the 99th percentile based on records for that season from 1981-2010, which has been set as the baseline reference period. In this way, the index and its components provide an easy to understand and objective measure of ‘how often are we experiencing the worst 1% of days?’ Extremes present the greatest risk to people, communities, the environment and economy.

Actuaries Institute CEO Elayne Grace said: “This index highlights the importance for companies of managing climate risk. Australia’s regulators are already calling for greater risk disclosure from businesses and this index can be one step along that road.”

Speaking as the chair of the UN Sustainable Insurance Forum, in London, Mr Summerhayes said:

“Although insurers are the most obviously exposed to the physical impacts of climate change through the potential for higher claims, the flow-on effects have the potential to harm every financial industry and impair global economic growth.”

He urged better disclosure by Australian businesses but also noted that there is a need for more robust data.

Pulkit is a senior actuary at AIG. He has spent the last 10+ years trying to understand property pricing, data analytics and the effects of climate change on natural perils.

Actuaries must call out non-financial risks