It was pleasing to see that a recent survey from a US job-search site identified Actuary as the number 1 best career option for 2015 listing a good hiring outlook, excellent pay and decent job satisfaction as the key reasons for this ranking (although noting that the requirement of being into maths might mean that this is not the career option for everyone).

Of course the actuary in me wants to understand the full methodology applied before becoming too excited about the result and since “safety” and “stress” were two of the criteria it might not be a surprise that photojournalism, broadcasting and the military featured in the 10 worst jobs list.

What was interesting though was that the best 10 jobs list also included mathematician (number 3), statistician (number 4) and data scientist (number 6) as well as software engineer (number 8) and computer systems analyst (number 10).  The message is loud and clear about the importance of technology, numeracy and analytic skills in a world where businesses are seeking to create competitive advantage through data-driven decision-making.

All of which makes me feel very comfortable that the Actuaries Institute strategic goal of extending the reach of actuaries within the data analytics sector is spot-on.  Data analytics or big data sessions have been some of the best attended sessions at events run by the Actuaries Institute.  Our recent call for volunteers to be part of a Data Analytics Working Group to help articulate our ambition in this sector and identify priority steps for the Institute was over-subscribed and we had to select less than half of those who volunteered.  We have now had the first meeting of this new Group which will be meeting on a monthly basis and which has set itself an initial task of articulating where the actuarial competitive advantage sits in the data space.  I like the Venn diagram that has been doing the rounds for some time with its three overlapping circles which can be thought of as representing computer science, statistical modelling and domain expertise.  Where these three circles overlap – the creation and identification of new insights to drive business decisions – is the “sweet spot” where an extension to the traditional actuarial skillset and training might place the profession in a unique position. 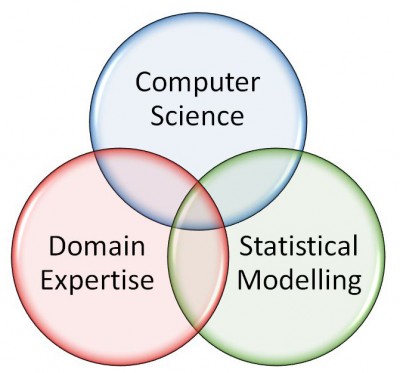 Jenny Lyon, the Vice President and one of the Council members sponsoring this strategic initiative, also attended the first meeting.  She talked about the gap in the data space for an “informed sceptic” identified by a speaker at a recent AICD course she attended.  Could this be the hole filled by the actuarial profession?

The opportunity for the actuarial profession in the data space is not a conversation going on only in Australia.  At the recent International Actuarial Association meeting held in Zurich – attended by members of the Actuaries Institute’s International Council Committee as well as CEO David Bell – a proposed new minimum actuarial education syllabus was put forward.  This includes a section on “Data and Systems” aimed at providing the foundation stones for future actuaries wanting to work in the data space.  We will of course be providing feedback and suggestions on the proposed minimum syllabus through the existing Practice Committees as well as the new Data Analytics Working Group.  Our discussions with other Associations at Zurich identified the French as probably being most advanced in offering CPD in data analytics through partnerships with universities.  Other Associations are either offering some CPD especially around statistical modelling techniques or trying to identify what to offer and there is clearly the opportunity for co-operative relationships in this area which the Institute will pursue.

The 10 best jobs list with its focus on numeracy also made me reflect again on the falling numbers of high school students in Australia enrolled in higher level mathematics and the implications of this for Australia’s global competitiveness in the identified growth areas.   While the overall number of students in NSW enrolled in the HSC has grown over the last decade the number taking 2 unit or higher maths dropped by 3,500 while the number enrolled in the higher level  Extension 1 or 2 maths dropped by 850.  So the actuarial profession is competing with other numeracy based professions and careers for an ever shrinking pool of high school students.

Worryingly for gender diversity and wage disparity, female students have dropped higher level maths at a faster rate than their male counterparts; the proportion of female students studying Extension 1 maths dropped from 42% to 40% across the decade while the Extension 2 proportion dropped from 39% to 36%.  In the Australian actuarial profession women make up around 40% of all members under 35.  If girls keep dropping out of higher level maths in high school will we be able to maintain this proportion?  It is (certainly in my view) important for the health and vibrancy of any profession to encourage as much diversity as possible.

On another numbers related topic the Actuaries Institute AGM was held on 30 April where the financial statements were presented to members for questions and comment.  Lindsay Smartt, the Senior Vice President prepared a supplementary note providing more detail about the finances and this was circulated to all members prior to the AGM.  For me the key numbers are –

Following the AGM, David Bell and I presented the strategic plan.  With a record number of 60 members present at the event (in person and via webinar) there was plenty of very positive discussion, questions and suggestions about the plan.  If you could not attend the AGM but have questions on the finances or the strategic plan please contact me at president@actuaries.asn.au

Under the Spotlight: David Whittle