The COVID-19 Mortality Working Group continues to compare the predicted number of deaths based on their modelling against the observed number of deaths using the latest available data to 31 August 2021. In the year to date, deaths from all causes were close to predicted, despite the 79 COVID-19 deaths in August. Other respiratory deaths – mainly flu – remain significantly lower than in previous years.

Key points from this latest analysis:

The graph and table below summarise the results of the analysis. This article concentrates on the experience in 2021, but we have also shown the 2020 results for context. 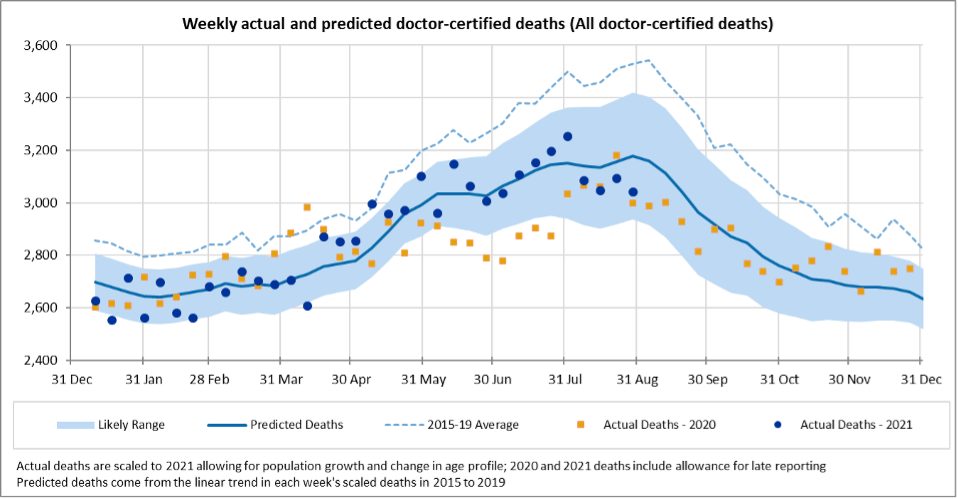 In the year to date, deaths from all causes were close to predicted (only 100 higher) and:

There were 79 doctor-certified deaths in August from COVID-19. This compares to 82 officially recorded COVID-19 deaths in the month.

It is important to note that expected deaths are increasing faster from population changes than they are reducing due to mortality improvement, which explains why the ABS has reported year-to-date deaths at 4,800 (5%) above the 2015-19 average.

The following graphs show the detailed comparisons for each cause of death. 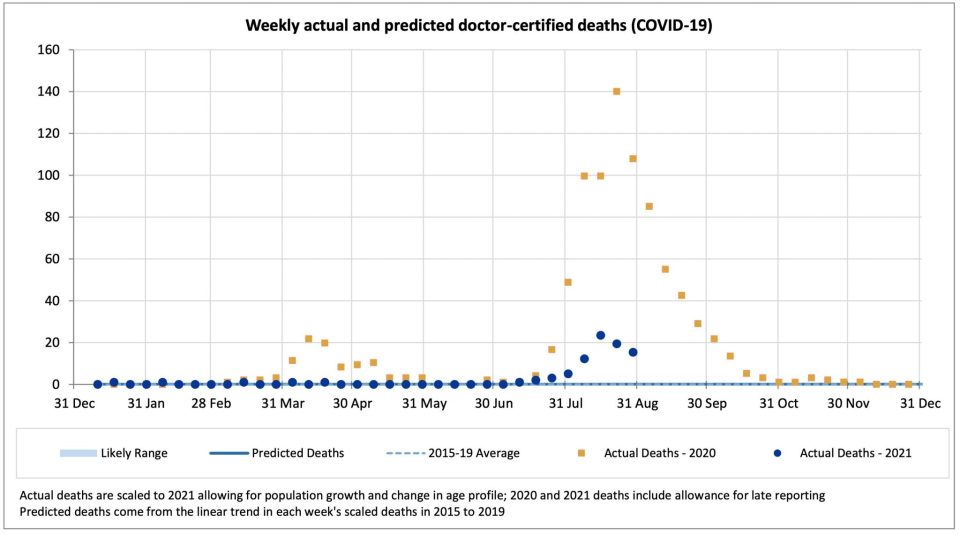 There were 79 doctor-certified deaths in August from COVID-19. This is close to the 82 officially recorded COVID-19 deaths in the month.  We would not expect the numbers to be identical, because the reporting criteria are slightly different, and it is possible that some COVID-19 deaths were referred to the coroner.  However, we find it reassuring that the discrepancy generally seems to be very small.

In the year to 31 August, there have been 95 doctor-certified deaths, compared with 97 officially recorded COVID-19 deaths.

Following the trend observed since the beginning of the COVID-19 pandemic, Australia continued to see significantly lower deaths from all respiratory illnesses in the month of August 2021.  Note that deaths from respiratory illness in 2021, while much lower than trend, have been higher than in 2020 since around mid-June. 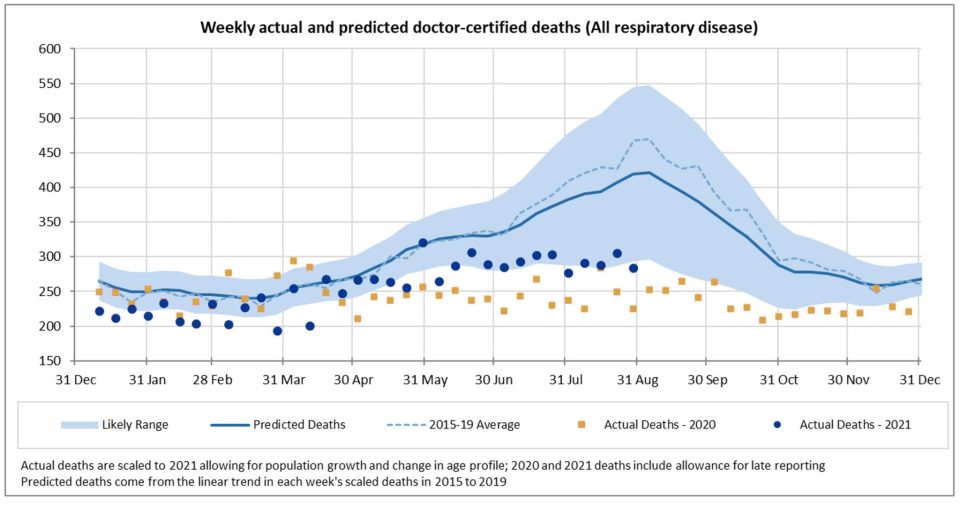 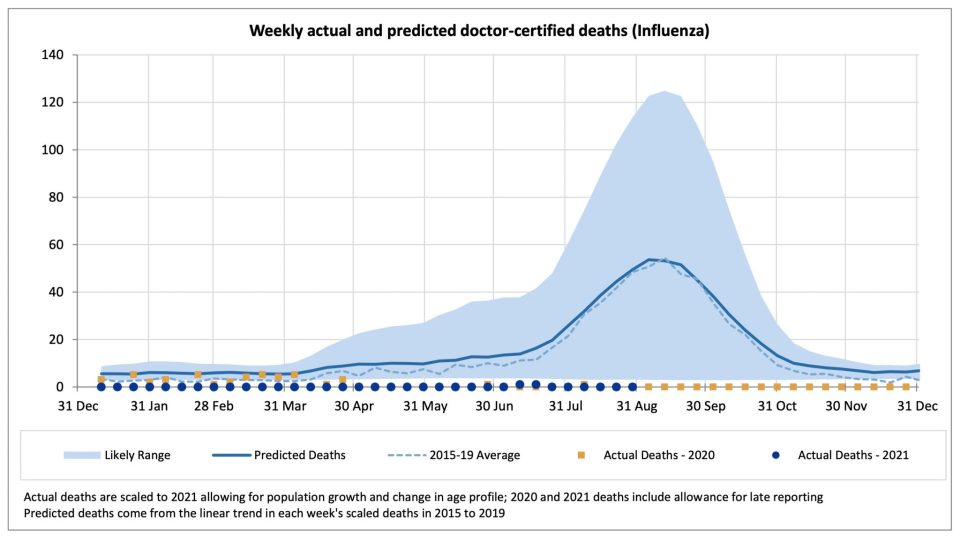 There were no deaths from influenza in August 2021. 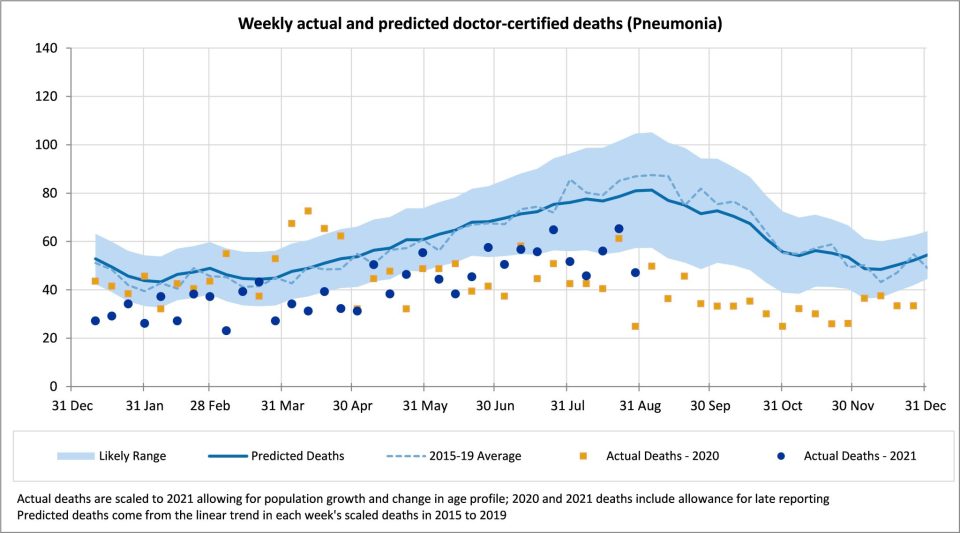 Pneumonia deaths remain low; deaths from this cause are lower than predicted for every week of 2021, and lower than the lower bound for most weeks. 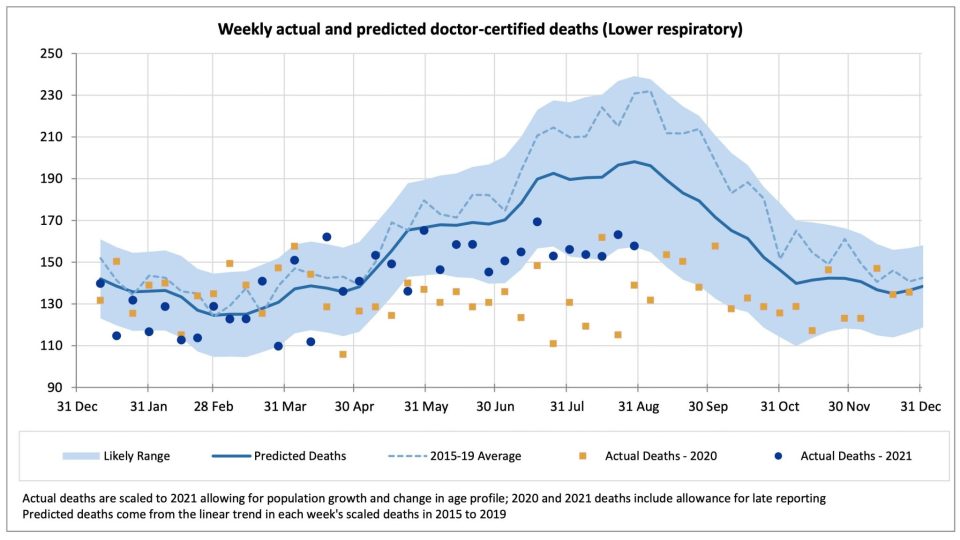 Deaths from lower respiratory disease were close to predicted for most weeks until end May 2021. From June to August, when we normally would see the start of the ‘winter hump’, deaths from this cause are lower than predicted, however they are not as low as in 2020. 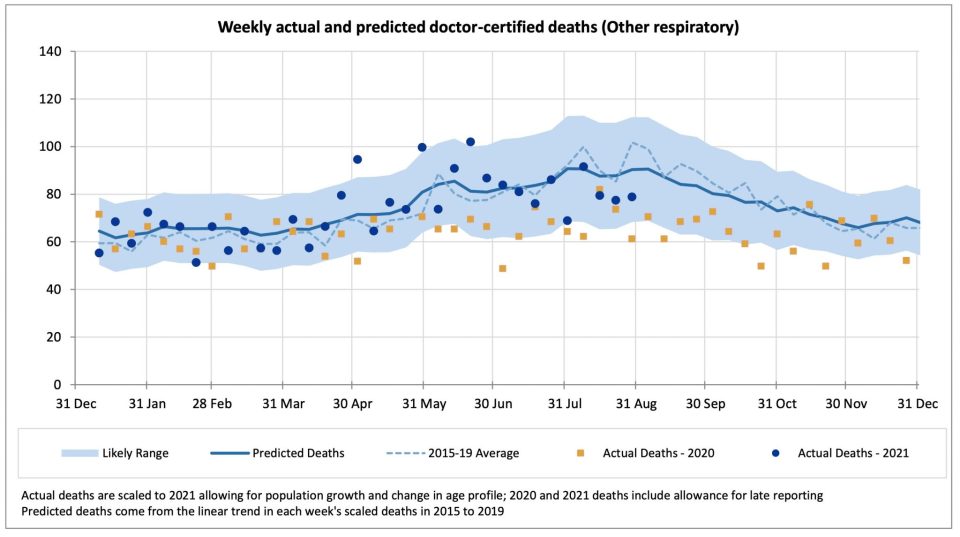 Deaths from other respiratory diseases are close to predicted for most weeks. 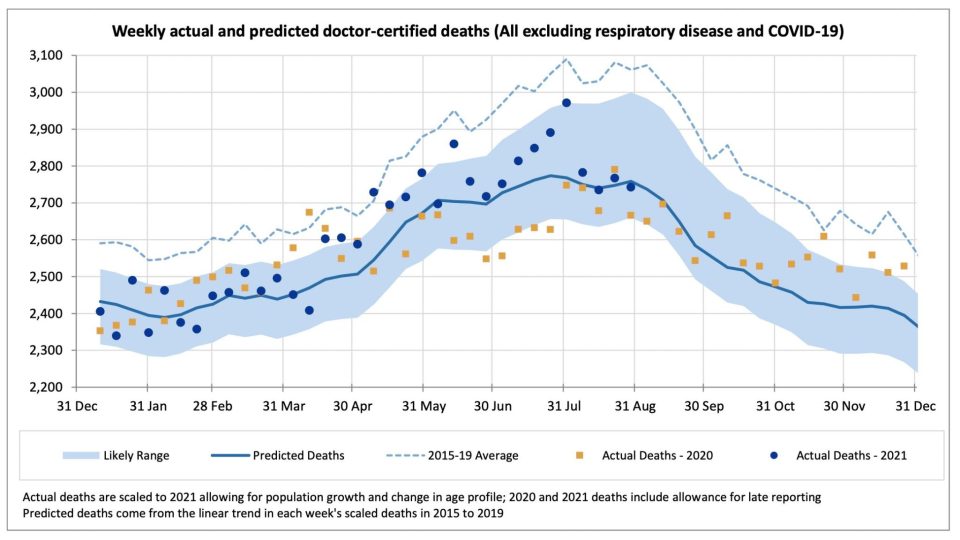 Excluding deaths from COVID-19 and respiratory disease, deaths in August were close to expected. This followed a period from mid-April until end-July where deaths were higher than predicted and above the 95th percentile in quite a number of weeks. This is mainly driven by the experience of ‘other’ deaths, and, to a lesser extent, heart disease.

The following figures show a breakdown of non-respiratory/non-COVID-91 deaths into cancer, heart disease, cerebrovascular disease, diabetes, dementia and all other causes. 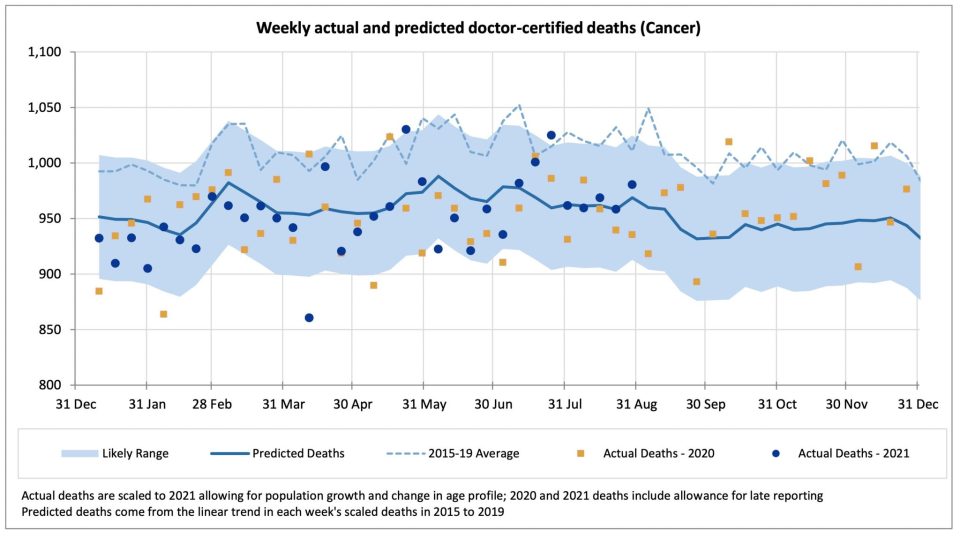 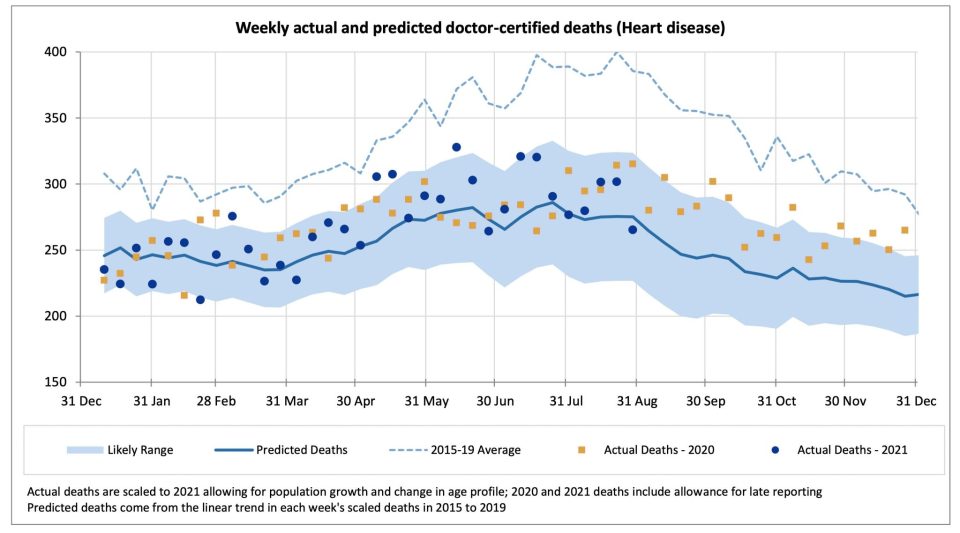 In the year to end-August, there have been higher than expected deaths from heart disease (up 4%). This has been fairly consistent across most weeks. We note that the predicted values allow for continued strong mortality improvement in 2021 in this cause. Deaths in 2021 are close to 2020. 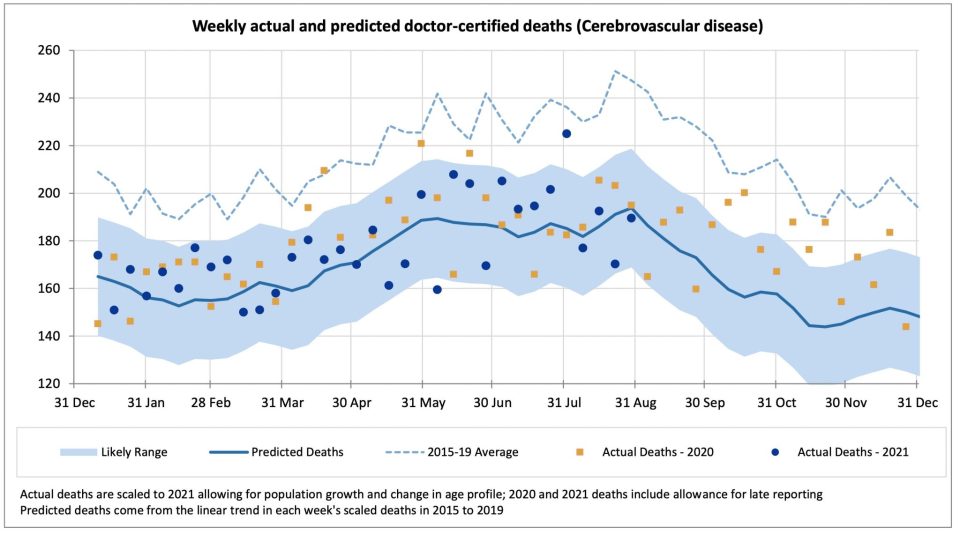 For cerebrovascular disease, actual deaths are only 2% higher than predicted, noting that the predicted values incorporate a continuation of strong mortality improvement. 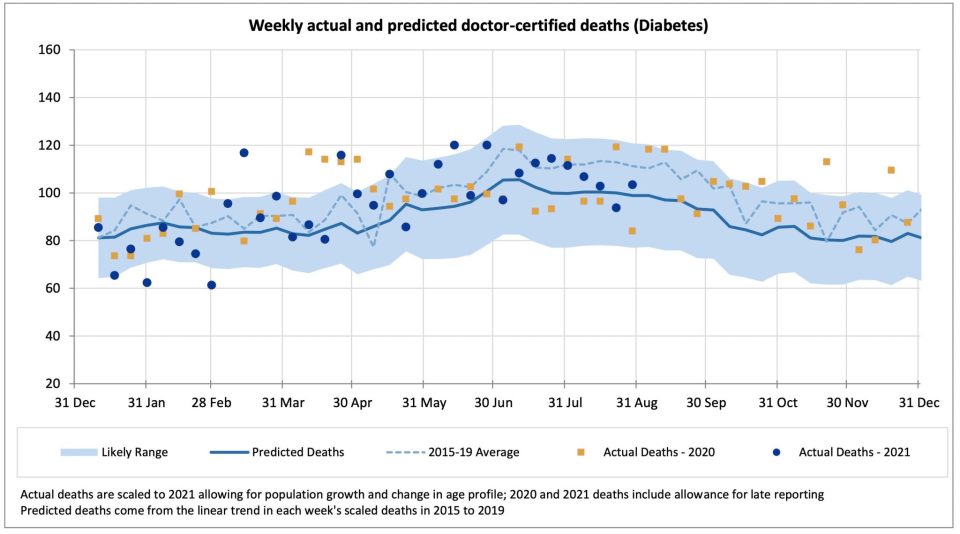 Deaths from diabetes are higher than expected (up 5%), however deaths from this cause make up only a small proportion of all deaths and are therefore somewhat volatile. 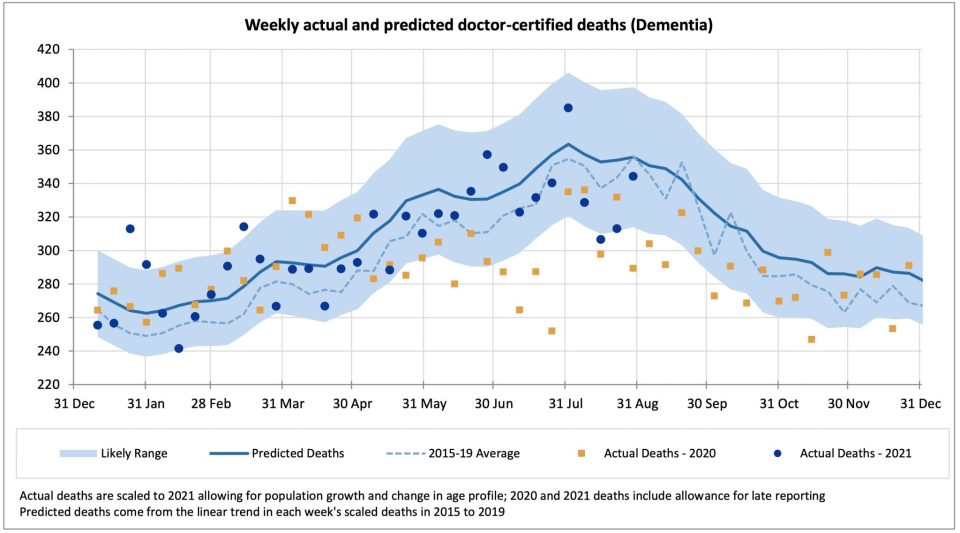 Deaths from dementia were lower than expected in August by quite a significant amount (down 8%), possibly related to lower than usual levels of respiratory disease in the community. 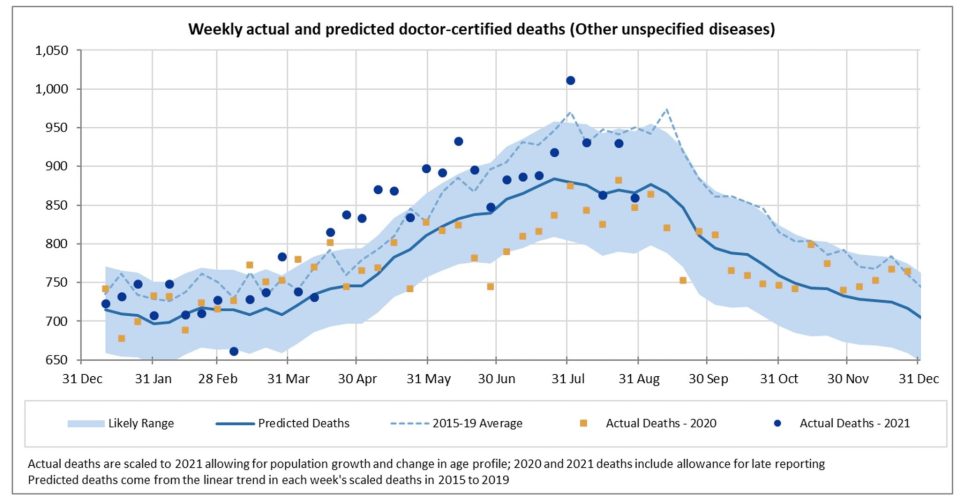 Deaths from other causes, i.e. those not explicitly reported on by the ABS, continue to be substantially higher than expected (up 5%, or 1,400 more deaths than predicted). Deaths from this cause have been substantially above the upper limit of the confidence interval from around mid-April until end-June. Whether there is any particular cause that is driving this increase.

The implications of delays in cancer diagnosis

by Ignatius Li and Miao Shi

Despite COVID-19, Australian mortality improvement is on trend