This article discusses other ways of thinking, how to use Edward de Bono’s role playing to enable different thought processes and provides more personal examples.

The Herrmann Whole Brain Model, is a four-quadrant metaphorical model of the brain, based on research originally conducted at GE’s corporate university, Crotonville. The model shows how thinking falls into four preference clusters that we each have access to. It is like our thinking system is comprised of four different thinking ‘selves’: analytical, organised, interpersonal and strategic[1].

Everyone has these four thinking selves available, but most people prefer some of them over others. So, when we discuss cognitive diversity, we are really talking about an individual’s diversity of thinking preferences.

Each of the four preferences—analytical, organised, interpersonal and strategic—contribute value to a business (or a profession). An organisation will be more successful in the long term if all types of thinking are in play and, usually, in specific ways. From their database of more than two million thinkers they identified patterns of thinking that are common occupations. I do not know what they found out about actuaries, but it is likely that actuaries collectively employ all these preferences.

Thriveworks[2] believes that there are 5 thinking styles: Synthesists, Idealists, Pragmatists, Analysts and Realists[3]. Note there is a partial commonality with the Hermann whole brain model concept.

Synthesists are largely defined by their creative and curious nature. Instead of leading with logic, they love to explore more abstract ideas. They ask, “what if?” and consider a range of views and possibilities. Some perceive synthesists as being argumentative, as they are quick to bring attention to opposing views—but these creative thinkers can prevent this perception by first acknowledging others’ ideas before presenting alternatives.

Idealists set high standards and are always working toward larger-than-life goals. While others might perceive them as perfectionists, in their minds, they are simply putting their best foot forward. These individuals are future-oriented, they value teamwork, and they expect everyone to work hard. However, it is important for idealists to realise that others have their own standards and expectations which might not match up with the idealist’s standards and expectations.

Pragmatists do not waste any time—they act. They tackle problems logically, step by step. They are focused on getting things done, but they are not interested in understanding the big picture like idealists are. Rather than considering what is best in the long-term, they think short-term. While pragmatists get things done, they can benefit from taking a step back and reflecting on big ideas.

Analysts work methodically. They gather all the facts and data, measuring and categorising along the way. Their personality is rooted in being thorough, accurate, and rational; analysts are always looking for a formula or outlined procedure for solving problems. These individuals tend to discount other ideas, but should open their minds, as other ideas offer unique value.

Realists are quick on their feet, and they do whatever it takes to solve the problem at hand. That said, realists bore easily—they do not feel challenged by everyday problems or stressors as most do. Yet, they want to be challenged. Realists can benefit, like pragmatists, from taking a step back and looking at a problem from different angles. They should take a little more time to gather all the information that is available to them and find the best solution (which is not always the first solution) before acting.

I suppose from an actuarial point of view we would all want to be realists. But depending on the task involved we might want to adopt other thinking styles – including more than one for the same task. 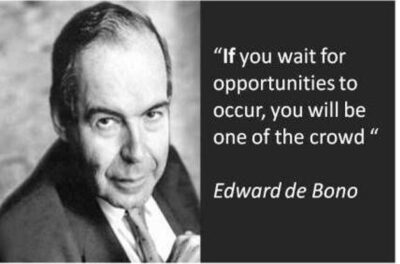 Edward de Bono had a different take on thinking. He set out six thinking roles. Thinking roles are not thinking abilities nor are they quite thinking styles. These are really mind tools to enable you to adapt your thinking style according to the component of a task that requires a lot of thinking. With discipline, we can all perform these thinking roles. It is as easy as changing your hat. Or is it?

Each thinking role is identified with a coloured symbolic ‘thinking hat.’ By mentally wearing and switching ‘hats,’ you can easily focus or redirect thoughts, a conversation, or a meeting.

The White Hat calls for information known or needed. “The facts, just the facts please.”

The Yellow Hat symbolises brightness and optimism. Under this hat, you explore the positives and probe for value and benefit.

The Black Hat is the risk management hat. It is probably the most powerful hat and much loved by actuaries. It concentrates on risks, difficulties, and problems.  It is also the most overused hat so a lot of people who like to wear this hat, do not perform under it. When worn correctly one can spot difficulties where things might go wrong and why something may not work.

The Red Hat signifies feelings, hunches, and intuition. When wearing this hat, you can express emotions and feelings and share fears, likes, dislikes, loves, and hates.

The Green Hat focuses on creativity, possibilities, alternatives, and new ideas. It is an opportunity to express new concepts and new perceptions.

The Blue Hat is used to manage the thinking process. It is the control mechanism that ensures the Six Thinking Hats guidelines are observed.

Some actuaries will ‘wear’ several of these hats during an assignment, but many of us would not like to wear some of them. I suspect wearing red, yellow and green hats can make some of us uncomfortable!

The normal process of developing industry and actuarial submissions to the government wasn’t going to work because by the time we had gone through the due processes the insurers would have already commenced paying benefits. So, I put on my green hat, leaped out of the coffin and wrote three sets of five brief letters to each of the Sydney Morning Herald, The Financial Review and The Australian, with each letter making a different point about why this was such a bad idea. I signed one set of three letters and got four relatively junior staff members of HCF to sign the others. 15 letters in plain envelopes went out in the mail that afternoon. Two days later all five letters appeared in special highlighted boxes in each of the three newspapers. By that evening the Commonwealth Minister of Health had capitulated. Nursing home benefits were no longer on the agenda.

The Commonwealth Department of Health had a conflict of interest when it regulated the health insurance industry while presiding over the national health scheme. What was a good idea for the national health scheme, like getting health insurers to pay nursing home benefits, was not a good idea for the health insurance industry. I often talked to senior public servants about this conflict but there was little interest in rectification. In 1988, due to bad investments, two major health insurers were either insolvent or close to it.

Senior people in the Commonwealth Department of Health were very concerned. If these insurers went broke confidence in the national health insurance scheme would plummet and the whole private health sector would be imperilled. I tried to get a consortium of solvent major insurers together to affect a rescue, but the CEO of a key insurer was adamant that his organisation would not be a party to it. In the end, National Mutual Life came to the rescue but, by then one of the senior persons in the Department of Health had died from a heart attack. I again put on the green hat and leaped out of the coffin. “It’s time private health insurance was regulated independently.”

I offered to write an actuarial paper (‘Wealth Insurance and the Health Actuary’) that outlined how this would be done and include the structure of a health insurance financial condition report if the government agreed to independent regulation. We kept our bargain. The Private Health Insurance Administration Council (PHIAC) was created in 1989. This was an interim step because, at that time, the regulation of private health insurance by the Australian insurance regulator was a step too far for both the Insurance and Superannuation Commission and the Commonwealth Department of Health.

The creation of PHIAC provided work for many actuaries and, finally, in 2015 PHIAC was merged into APRA.

This article is the second part of a two-part series on Edward de Bono. Read Part 1.

Brent is Principal at Brent Walker Actuarial Services Pty Limited. Before he retired, Brent had over fourteen years of management experience in the life insurance industry, ten years in the health insurance industry and over 35 years actuarial consulting to the health industry. He has been involved in advising The Australian Commonwealth and State Governments, health insurers, life insurers, friendly societies and retirement villages. He has also undertaken many international assignments in Europe and Asia. Brent is a past chairman of the International Association of Consulting Actuaries.

Thanks for the interesting article. It really made me think! :)