With data becoming more widely available, there are more and more companies using powerful machine learning models to gain an edge over their competitors.

The insurance industry is no exception, and a good model can help give the insurer a competitive advantage in areas such as (but not limited to):

While an actuary may not necessarily be involved in all the business areas listed above, they would often be exposed to at least one of them in their day job.

The biggest downside of using more complex machine learning models is losing the ability to easily interpret the results and the factors driving the predicted outcomes. They are often referred to as “black box” models for this reason. While the police department in the Minority Report certainly did not think twice about understanding their predictions before launching a full-on manhunt after their own unit head (played by Tom Cruise), it is highly unlikely that upper management and other stakeholders will have such blind trust in a new model without understanding how the finding was made.

Techniques such as GLMs and GAMs offer better model transparency, but can struggle when attempting to detect more complex shapes and interactions in the underlying data.

Thankfully, there are some tools and techniques (called explanation models) available that can help unpack a prediction from a powerful black box model. This means they can be used to answer questions such as:

This article will provide a gentle, hands-on, introduction to SHAP (short for SHapley Additive exPlanations), one popular explanation model. It was introduced as a unified approach to model interpretation and is currently the only explanation model that relies on solid and well understood economic theory instead of heuristic methods, which other popular methods (like LIME) are based on.

While this article will not provide a universal solution for the actuary to start using these black box models imprudently, it aims to encourage the exploration of these powerful black box models and give the reader a starting point for its interpretation.

Run this from the browser

Although this article will make use of the Python implementation, there is also a R wrapper for the SHAP package called shapper, and ml3, which works with the DALEX framework. For more information on how to get started with DALEX, check out Jacky Poon’s top 10 R packages for data analysis.

The python code shown this snippet can be run from the browser through this link.

Note that some loading time is to be expected, particularly when performing grid search and cross-validation for the machine learning models. However, the binder does not require the reader to download the dataset, or any other dependencies to run the models. Furthermore, the reader is encouraged to play around with the code and look at how SHAP explains the different predictions, as well as explore the other graphs that the SHAP package has to offer.

The example uses Python3 and the main packages that we will be using are listed below:

Note that the sklearn pipeline is the main backbone of the process here out of convenience but any other workflow/ pre-processing framework would work just as well.

The dataset used in this article focuses on predicting claim cost from a set of policy characteristics. The included policyholder is:

There is also a claims cost response column. The data can be downloaded from the Github repository here.

Note that although all the usual steps in the modelling process are involved here, this article will mainly focus on using the SHAP package and interpreting the model predictions. With that in mind, the rest of this section will not be discussed in detail, but includes: 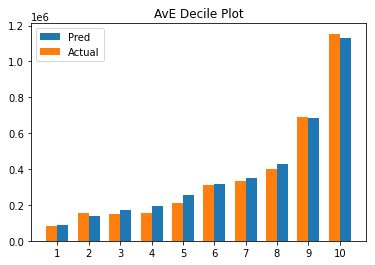 SHAP stands for SHapley Additive exPlanations and uses a game theory approach (Shapley Values) applied to machine learning to “fairly allocate contributions” to the model features for a given output. The underlying process of getting SHAP values for a particular feature f out of the set F can be summarized as follows:

Just from looking at the steps mentioned above, we can infer that this approach would have 2 major issues to solve:

Thankfully, there is a user-friendly API for us to define what “missing” means by creating background dataset that imputes the missing values while running our models. As for (2), SHAP values are generally approximated with sampling subsets of . However, in the case of tree-based models and deep neural networks, there are elegant solutions implemented such that we can get exact solutions that run in polynomial time!

While the article will not delve into the details on how the SHAP algorithm handles these issues, there are various resources in the appendix with more detail.

The SHAP python framework provides a variety of visualisations for model validation that can be found here. However, for the purposes of this article, the focus will be on the Waterfall, Force and Dependency plots to interpret model predictions.

We will also look at the results in the context of a particular observation with index equal to 30.

Like the LIME package, SHAP works with explainer objects to calculate the results, and provides us with three main explainer categories:

The first two are model specific algorithms, which makes use of the model architecture for optimizations to compute exact SHAP values as mentioned above. The KernelExplainer on the other hand, is a model agnostic algorithm uses sampling to approximate SHAP values. Since a GBM regressor is the model of choice, the TreeExplainer object is used for explanations in the following sections.

The SHAP waterfall plots aims to explain how individual claim predictions are derived.

Each intermediate value shows the impact of that variable on the ultimate predication for that observation. The plot shows that this policyholder’s expected claims cost is about 13% higher than the average, and both the gender and region did not contribute materially to this outcome. While the higher-than-average BMI did contribute to ~$1,300 more to the costs, this was mostly offset by the fact that she had no children.

The two main drivers mostly offset each other as well, but the fact that she is older outweighed the effect of being a non-smoker by ~$1,400, which makes up the bulk of the net increase from the average. 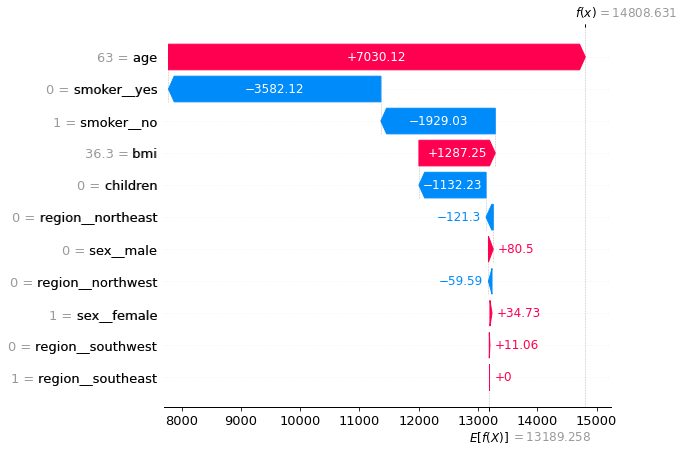 The force plots in the SHAP package can output both local and “global” interpretation graphs. While it does not provide a global explanation in the form of an equation like in our GLMs, it does give us a model-level view of the results to work with. This is done by stacking and sorting all the SHAP values for all predictions into 1 plot as shown below.

While both axes can be customized from the combo box, by default, the Y-axis shows the output value of the model, while the X-axis plots all the samples in the dataset sorted by similarity (sorting it by output value is easier to read). Hovering over an area of the graph, provides a quick summary of the significant rating factors that are driving the modelled costs up (in red) or down (in blue).

At a high level, the diagram shows that the model has put a lot of emphasis on the state of smoking and age, which is in line with high BMIs have an interaction effect with smoking, accounting for many of the higher claim predictions.

The SHAP dependency plot is a very simple graph that shows how the SHAP contributions differ for different values of the feature (BMI in this case). This is like a Partial Dependency Plot (PDP), which visualizes the marginal effect of a feature towards the model outcome by plotting out the average model predictions against different values of that feature. The SHAP dependency plots do not average the outcomes and show the variances on the y-axis. Here, there is a clear interaction effect between BMI values and the smoking state of the policyholder.

The blue data points (non-smokers) show a more gradual slope for BMI contributions in contrast to the pink points (smokers), where the SHAP contributions jump significantly at the BMI=~30 point, which is in line with what we could guess from the previous force plot output above.

As data becomes increasingly available and insurance products continue to get more complex, the use of more robust models to handles these interactions will be inevitable for many prediction tasks across the whole insurance value chain, not just for claims modelling and fraud detection.

Validation frameworks like SHAP and LIME seem to be a big step in the direction of model-agnostic-additive explanations. While the article provides a gentle and practical introduction to the idea and implementation behind SHAP, note that the theory and mathematics are a little more involved. For those who are interested in deep diving into the details, there are a few links below for further explanation. Andrew Ngai has also previously written an analytics snippet on SHAP, from the perspective of feature importance of using a housing prices data set, which the reader is recommended to check out as it covers some of the other visualisations available in the SHAP package.

Jonathan Tan is currently part of the pricing algorithm team at IAG. He is passionate about all things coding, data science, analytics and shares his understanding of the tech world through his personal blogs. Is continuously taking on data related projects and encourages more actuaries to explore the fascinating world of machine learning and artificial intelligence.

Role of the Underwriter in the age of Data & Analytics

by Alex Pui and Samuel Chu