In this week’s COVID update, we focus on the NSW Court of Appeal’s business interruption test case ruling, with many insurers increasing provisions for payouts in response. Turning to COVID numbers, just six locally acquired cases in Australia this week is an extraordinary contrast to over four million new cases globally. While the pace of new cases globally has plateaued, many are watching to see if the US Thanksgiving holiday will cause another surge in coming weeks.

The table below has changed to a four-weekly interval to help understand what’s been happening over recent months. 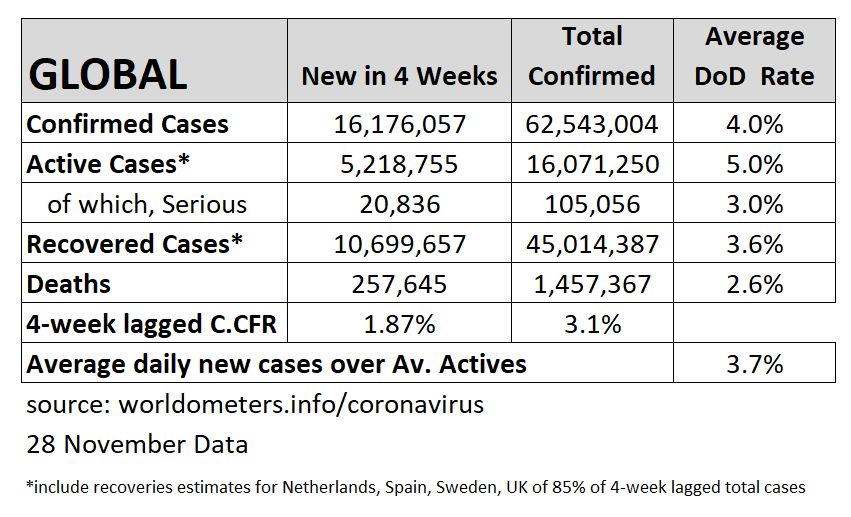 The world added 16 million new COVID cases in the past four weeks, with average daily new cases just under 600,000 over the past fortnight after its alarming surge up from 300,000 just 6 weeks before. Recall that from July 24 and throughout August, daily new cases stabilised at circa 250,000 before creeping up to 300,000 and then taking off.

It’s too early to say if this surge is starting to peak. At 4.1 million, weekly new cases were 82,000 lower this week compared to the prior week, the first fall since 12 September when there were 1.9 million weekly new cases. But many are watching to see if the US Thanksgiving holiday causes another surge.

Deaths, which lag new cases, are still rising, but may be flattening off. The daily average is now over 10,000 deaths a day, but the weekly ratio of deaths to 2-week lagged new cases remains low at 1.76% (for the last 2 weeks), the second lowest level of the pandemic.

The USA’s weekly new cases over the last 4 weeks would make them, in just 1 week, the 12th largest global outbreak of the pandemic, a squeak ahead of Germany’s total outbreak across the whole pandemic.

Europe is again the horror-story of deaths, with nearly 50% of the deaths in the 4 weeks, 60% of those in Western Europe. Reported deaths in Asia were 5th behind, North America, South America and the Middle East. There were 44 deaths in Oceania in the 4 weeks, none in Australia or New Zealand. French Polynesia remains the Oceania hot spot.

Australia has continued to buck the global trend, recording just 71 new cases this week (93 last week), taking total case numbers to 27,890.  Of those, 64 cases were from overseas travellers (68 last week) and one was an historic case, leaving only 6 locally acquired cases.

All the locally acquired cases were in South Australia, and all were linked to the Parafield cluster (total 33 in the cluster):

The number of close and secondary contacts now in quarantine in South Australia is 1,900, down from a peak of 5,800.

By December 1, State borders except Western Australia will be open to all travellers without quarantine, except for travellers from South Australia and in some instances Victoria.

The UK government has now asked the regulator to assess the Oxford University / Astra Zeneca’s COVID-19 vaccine candidate, following trial results showing around 70% effectiveness in preventing COVID-19 disease. This is lower than both the Pfizer and Moderna vaccines which showed over 90% efficacy, but may still be helpful in addressing global needs, as it can be more widely manufactured. The Pfizer and Moderna vaccines use MRNA technology – Australia does not currently have the capacity to manufacture clinical-grade mRNA vaccines.

Business Interruption Insurance: The NSW Court of Appeal handed down its judgement in the ICA/AFCA business interruption test case ruling that the wordings “Quarantine Act 1908 (Cth) and subsequent amendments” could not be construed as referring to the Biosecurity Act 2015 (Cth), which replaced the Quarantine Act in 2016. The court did not rule on the secondary issue on whether a disease under the Biosecurity Act 2015 needed to be listed at the time of policy inception or at any time throughout the duration of the policy.

The final outcome is far from certain at this stage as the test case considered only one of several policy issues being debated.

The ICA is considering a further test case to explore some of these, such as proximity and prevention of access clauses. The ICA is also considering an appeal against the above decision.

IAG has provided $865 million in post-tax provision following the court’s decision and announced capital raising of $750 million. Suncorp has maintained its $195 million provision stating that the test case outcome is not expected to affect its total BI provision. QBE has reiterated that its business interruption policies require a number of triggers to be met and it expects its claims impact to be mitigated by the Group’s catastrophe reinsurance protections.

The ultimate financial impact for primary insurers will also depend on the extent to which they are able to recover losses under reinsurance contracts. AM Best raises reinsurance as further area for potential disputes

Jobs & Business. A research discussion paper released by the RBA, confirms that the JobKeeper program helped to reduce “total employment losses by at least 700,000.”  Payroll jobs are 3% below mid-March levels nationally with Victoria recording a 1% improvement over the previous fortnight to 31 October. Almost 75% of businesses reported stable or increased revenue in November compared to 48% in July, with further improvements expected, according to the ABS. Wage growth was subdued in the September quarter at 0.1% and 1.4% in the year-ending September 2020, according to the ABS.

APRA. At the AFR Banking and Wealth Summit, APRA Chair Wayne Byres reiterated the recommencement of APRA’s regulatory program, largely put on hold at the start of COVID-19 with focus on remuneration, bank capital, and superannuation data. APRA has also published a new FAQ for authorised deposit-taking institutions on credit risk capital treatment of loans covered by the Coronavirus SME Guarantee Scheme.

ASIC. At the Australian Retail Credit Association Conference, ASIC Commissioner, Sean Hughes, highlighted ASIC’s current priorities, after allowance for the impact of the pandemic, in the credit industry including hardship, predatory lending and debt management practices. Ongoing credit reform and design and distribution obligations are firmly in the 2021 horizon.

General Insurance.  Finity outlines the priorities for insurers on the regulatory front as attention shifts back to a number of regulatory reforms following the temporary hold following COVID-19. Finity’s latest Optima publication focuses on the impact of COVID-19 on company value and how COVID-19 is re-shaping the general insurance industry.

For the number crunchers

The Institute of Health Metrics & Evaluation produces rolling projections of COVID cases and deaths across the world, and for most countries. They project a peak of this wave of infections in late January 2021, with a slightly earlier peak in the US in late December. Deaths are projected to peak in the US around the time of Biden’s inauguration.