by Nick Cowdery and Pete McAllister

This year for International Women’s Day, our four panelists spoke about their experiences, and contrasted how these have changed over time. We also gained perspectives on how women’s roles have changed at work and what further action needs to be taken to continue progression towards gender equality. 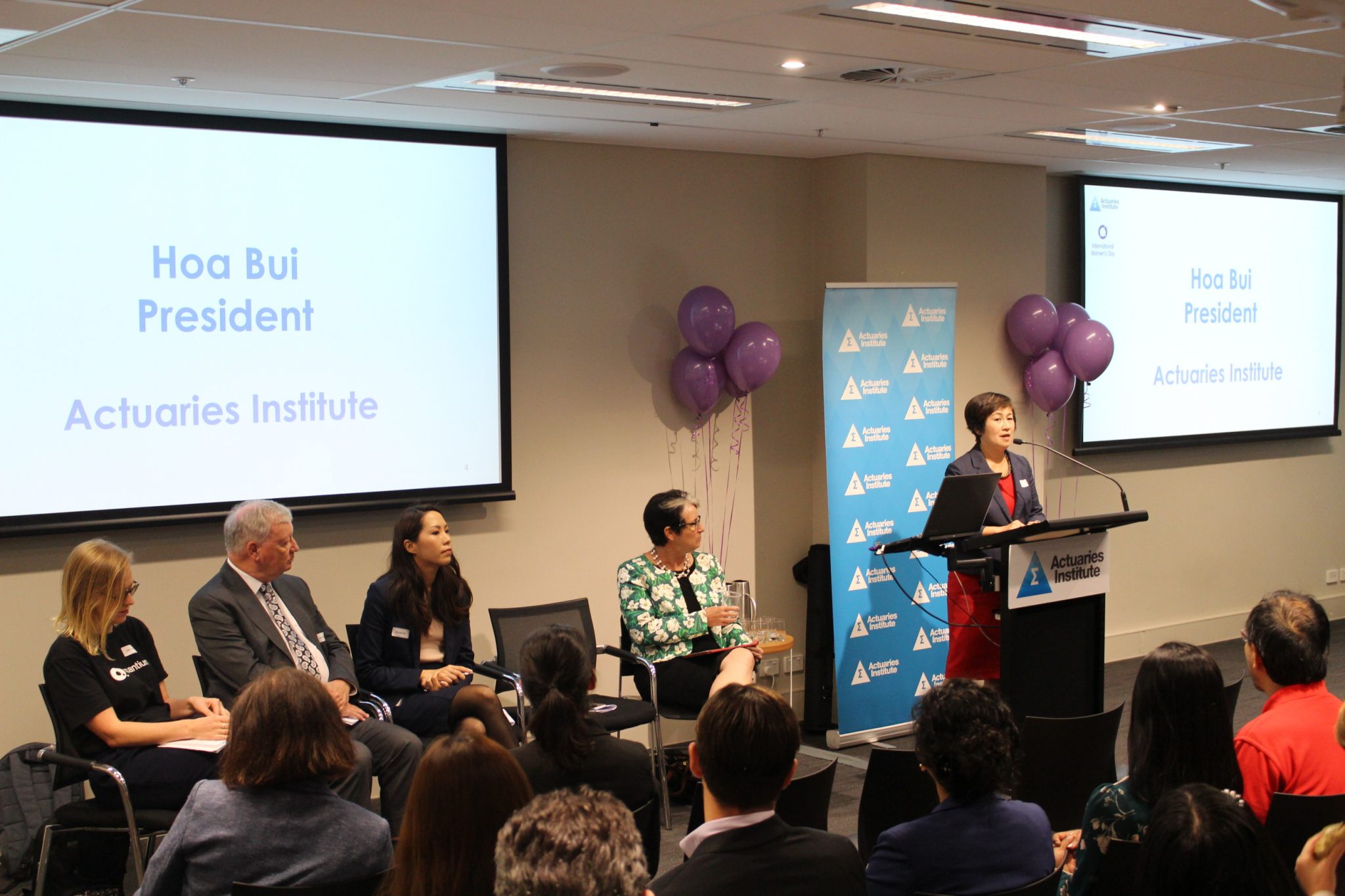 2020 President of the Actuaries Institute, Hoa Bui, was our first speaker of the day. Hoa qualified in 1988, entering a very different workforce to what we see today: NO maternity leave, NO working from home and NO job sharing. This made it a challenge for women to be a success. At the time she knew of only one female Appointed Actuary across approximately 40 Life companies.

Hoa returned full time after having children – feeling that this was necessary to be taken seriously alongside male colleagues. Eventually she moved into a part time role – succeeding in remaining part time “under the radar” – it was two years before people that she worked with (outside of the day to day) realised she was part time!

One of most important things is to ensure successful women in your business is to provide a strong role model – but we also need to focus on supporting females in our teams to develop role models of the future.

Hoa strongly believed that setting objective measures was a great way to counter Unconscious Bias – these need to be set before the event (e.g. performance review), and benchmarked against afterwards. And if the result seems biased, go back and try again! You have to believe in your objective measures which were set at the outset.

Hoa used the analogy of a game of tennis to illustrate where she feels the ‘playing field’ is now at. Where previously we were playing men’s doubles, now it’s more like mixed doubles. Women have the skills to play but when the ball comes to them, they need to play the ball and take the right shots, and demonstrate their abilities. 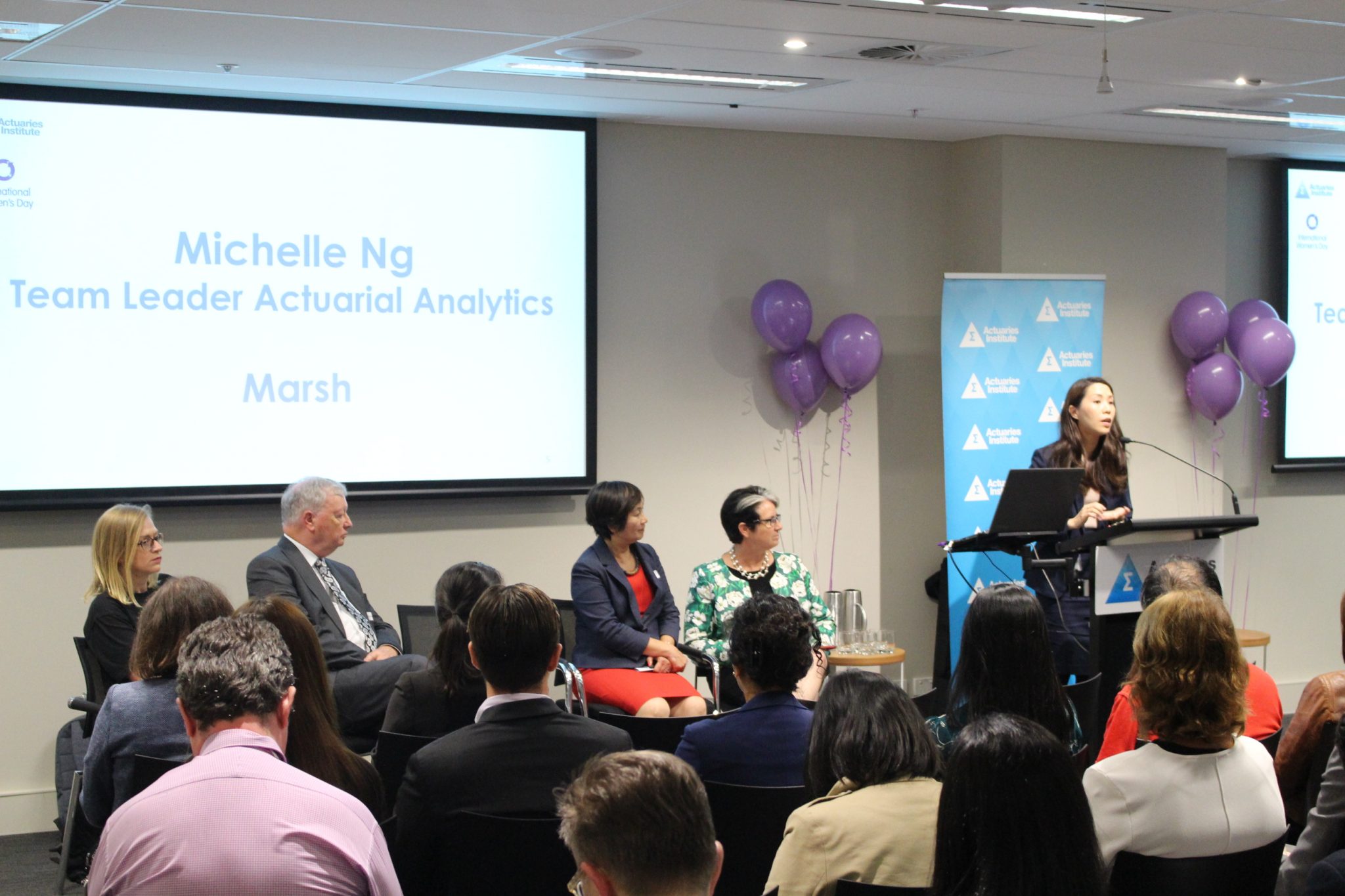 Michelle Ng represented for the more recently qualified cohort. She has worked both in traditional actuarial roles and more recently, commercial portfolio, more male dominated environments. She felt that when she graduated there were fewer girls around but that seemed, intuitively, to have changed. She noted an obvious shortage of women in leadership roles though.

Michelle’s tips for females in the workplace included speaking up and being curious. She added that it is good to be known for something so you stand out and referenced her own experience joining and running social committees. Similar could be achieved in training, or charitable work.

She identified networking as a crucial skill which can be hard if you are trying to break the ice in a male dominated environment . She had encountered a lot of footy banter but had no interest in the game herself! Instead she found common ground in other interests like family, pets, weekend activities to bring herself into the conversation on topics that are meaningful to everyone.

The overarching view from both speakers was clearly a message of support and self development, to speak up and take opportunities that are offered. You need a good culture to do this and can contribute to making that change if it isn’t perfect already.

Next up was a view from employers looking at various issues women can face in the workplace. 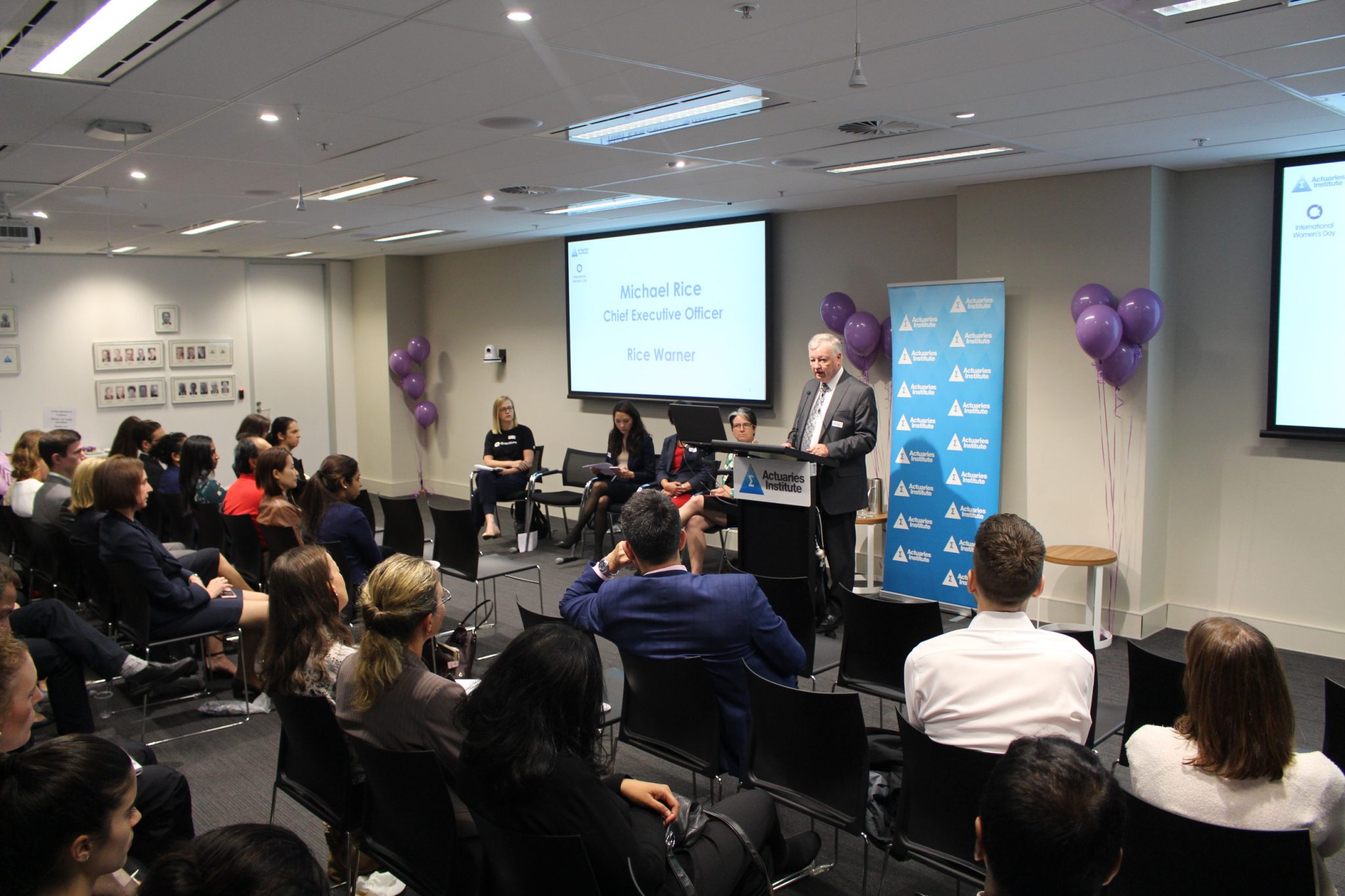 Michael Rice AO, Executive Director and founder of Rice Warner, has been looking at the gap in retirement savings for many years. Back in 2003 he highlighted that females suffered in retirement because they live longer, often have career breaks and sometimes retire earlier too. This leads to smaller account balances and he began to investigate how to close the gap in a way that is fair (and legal!)

His advice: be focused on outcomes, rather than purely looking at costs. It might cost more to pay females a higher super contribution, in order to achieve the same outcome. However, Rice Warner found that when looking at Insurance benefits, they provided the same benefit (outcome) to Males and Females, and the underlying cost was higher for men than women.

Therefore there was precedent to alter the benefit to achieve the same outcome, regardless of ‘cost’.

Rice Warner therefore applied for, and were granted, approval to change their benefits package to include,

● 2% additional spend through Insurance benefits package up to $160k salary

In 2016, there was a senate report into “Achieving economic security for women in retirement” – taglined “A husband is not a retirement plan”. Disappointingly, none of the 19 recommendations made by the Senate report on the subject have been adopted to date. 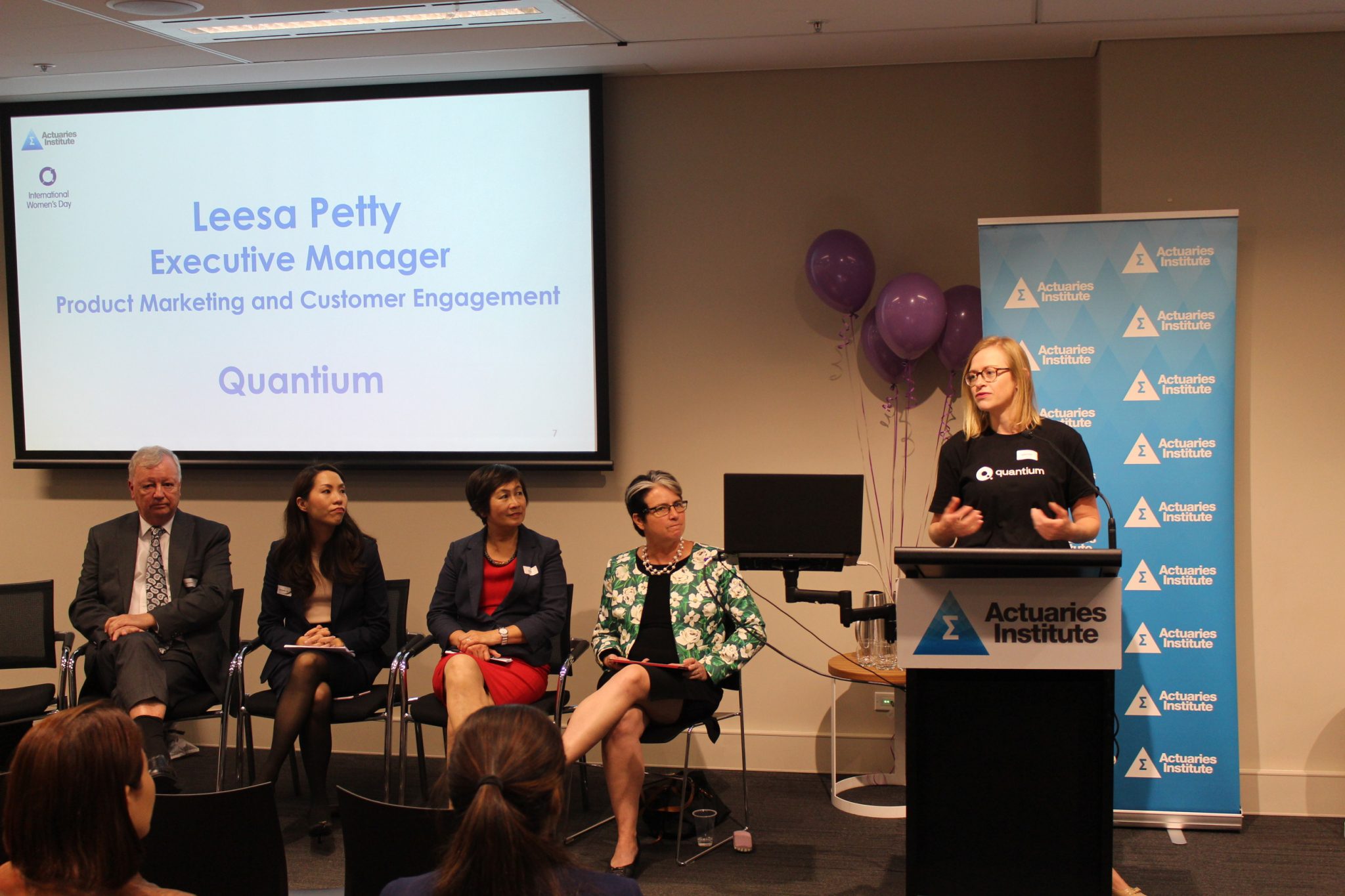 Leesa Petty (Executive Manager – Product Marketing and Customer Engagement at Quantium) was also invited to provide another employer perspective. Her current role at Quantium involves running the analytics community to support the analysts in the firm. She has seen unconscious bias and also women self select out of promotions or other opportunities – but why?

In Quantium style, they analysed all the data they had to find the answers. Much was down to flaws in existing processes which have now been changed. Improvements include:

They found that males performed better with the time constraints, and selecting a black and white answer. Women however were less suited to the time constraint, and preferred to leave more descriptive answers to qualify how they arrived at their answer. For Quantium, the time pressure wasn’t a “real” environment and did not reflect the majority of the projects in their workplace for that role. Changing some of the options to open answers (as opposed to multiple choice) and by changing the timing element achieved higher female success rates. 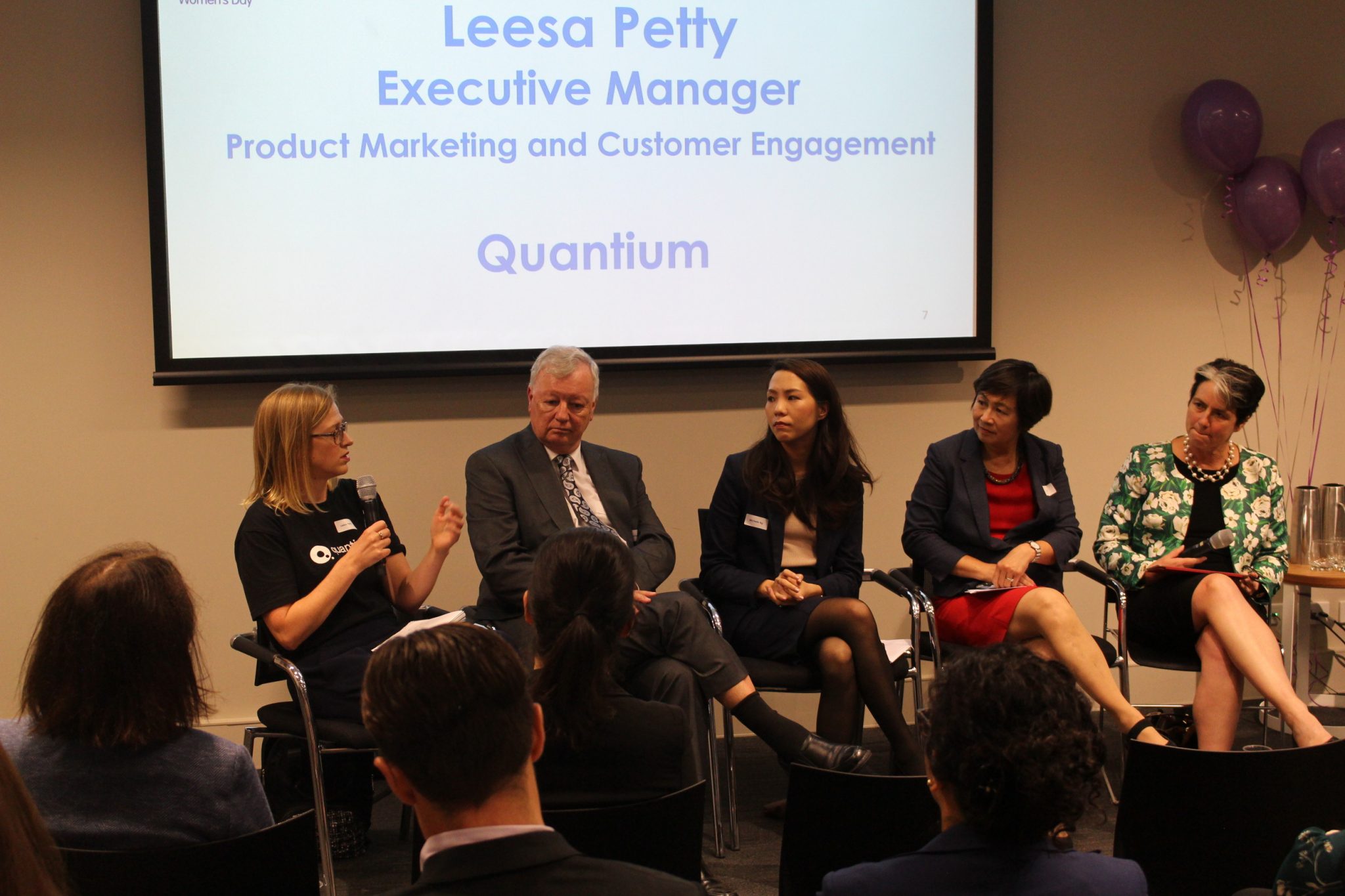 Some excellent questions from the floor gave us further insights from the panel.

How can we target unconscious bias?

Use objectives measures from the start to see what you think success should look like.

Then see if you are achieving that success – if not, unconscious bias may be present.

Diversity has to be in the DNA and the culture. This starts with leadership and asking if they have the right behaviours. 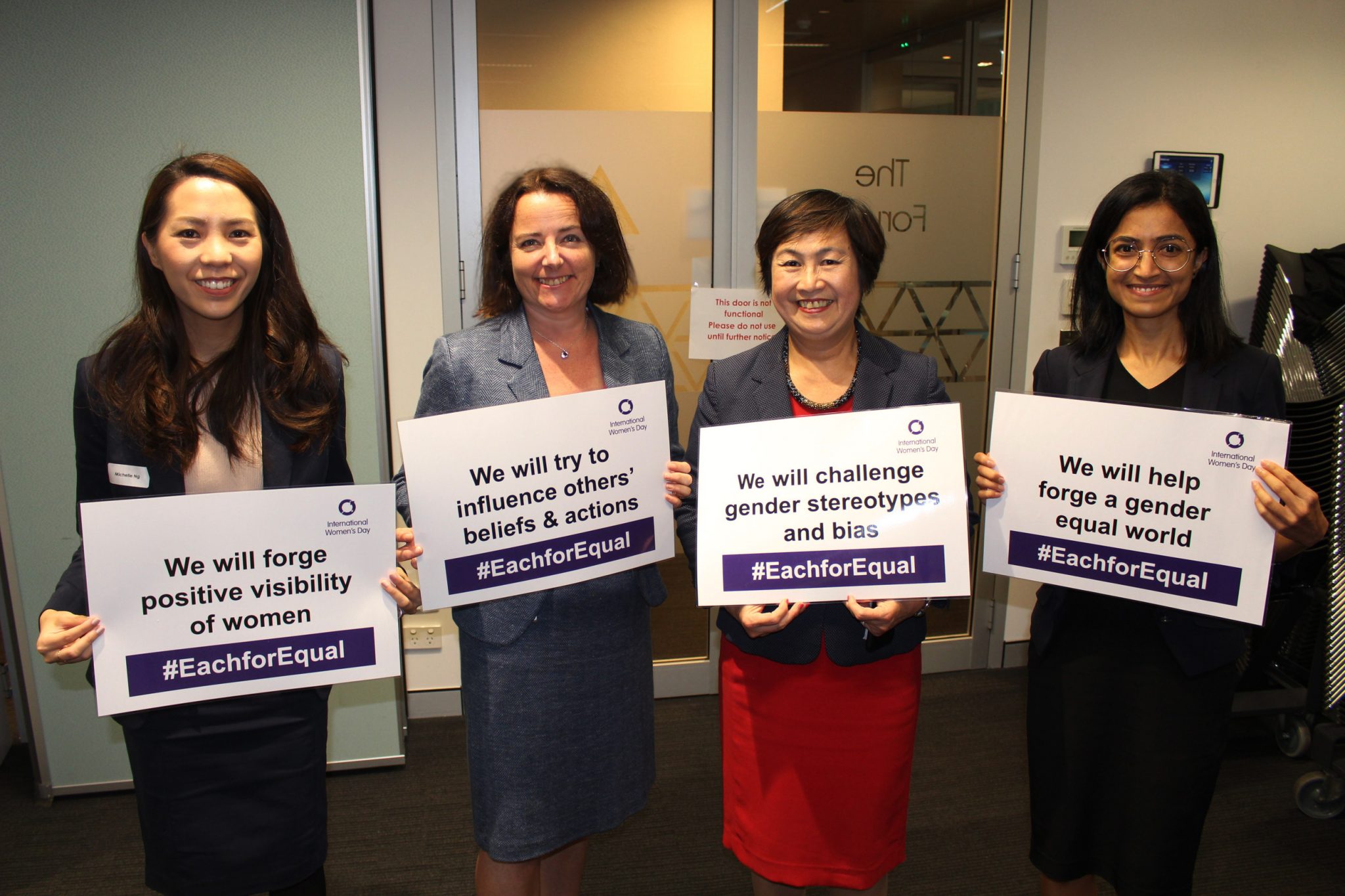 How can we encourage more part time roles?

Use your network of people who know you to ask around. Ultimately if a company won’t consider PT then they might not be the right place for you.

Be open and honest and discuss the relationship you want with your employer and what you want to achieve.

What can the Institute do?

Focusing on the behaviours we want people to have and the role we want them to do – that will take gender and ethnicity out of the equation – then you get the right outcome.

When we think about an average work day, perhaps 80% is work and 20% is ‘social’, or interactions. These are important, and are the first thing that drops off when you start to work remotely, flexibly, part time etc. We probably all need to focus more on that 20%, as it can be key to opportunities and progression. 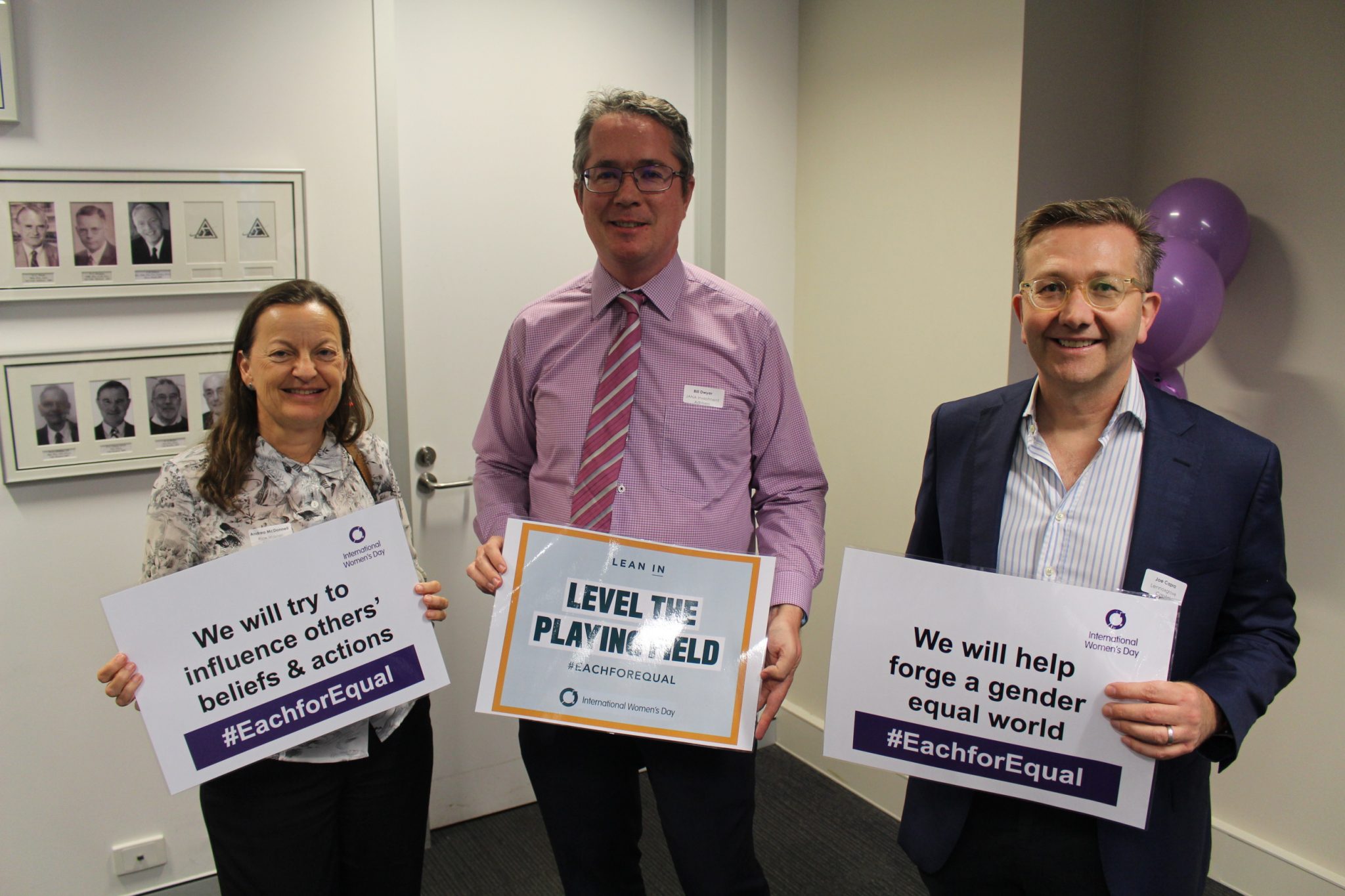 If you could do one thing what would it be?

Call out inappropriate comments or behaviours from others, particularly if not directed at you.

Bring people together. Women’s network at Quantium has created a real sense of belonging

Ask difficult questions earlier in your career and if you are a male boss – listen to the questions being asked.

This was a very engaging event, as demonstrated by the high attendance and large volume of questions from the audience. The panel provided a diverse range of perspectives and experiences of gender equality, and people left the room with many ideas and actions as to how they can pledge #eachforequal to improve gender equality in their workplaces. 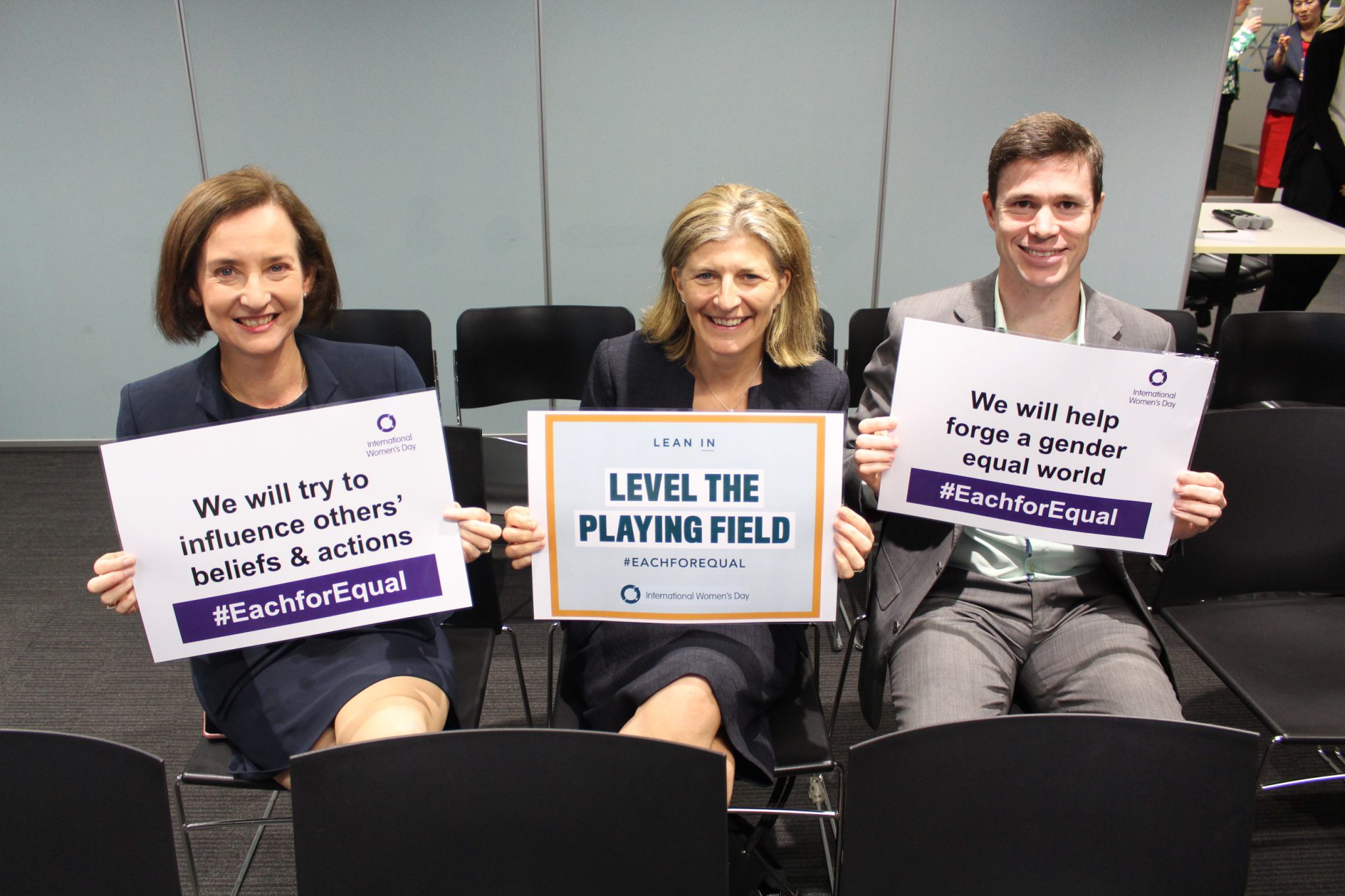 The Diversity and Inclusion Working Group is committed to promoting its values throughout the membership and beyond. We are excited to continue delivering these Insights sessions and initiatives in 2020.

Nick Cowdery is Director at InterAct Search. He has over 17 years experience recruiting professionals for Insurance, Actuarial and Risk Management roles in Australia and the UK. Nick has in depth knowledge in the Life, Non-Life, Risk, Investment and Superannuation industries placing candidates at all levels from analyst to CEO. More recently, Nick has developed an interest in exploring the way recruitment works for both employers and candidates. New tech solutions can make the process more effective and efficient and hopefully, more satisfying for all concerned....... Specialties: Sourcing candidates with risk, actuarial, quantitative and technical insurance expertise.

Pete is a Senior Pricing Actuary at AXA XL. He has been in the insurance industry for 8+ years, and provides technical pricing support across all product lines in Asia Pac, with a particular focus on Property and Casualty. Pete is chair of the AXA XL Inclusion committee, a member of the Diversity & Inclusion Working Group at the Actuaries’ Institute, and a member of the InterInsurance network.

Managing the Invisible Virus Pandemic – learnings from the world