The latest paper in the Actuaries Institute ‘Dialogue’ thought leadership series, titled The Impact of Climate Change on Mortality and Retirement Incomes in Australia, explains how an ageing population will amplify the effects of climate change and impact retirement income and retiree well-being. 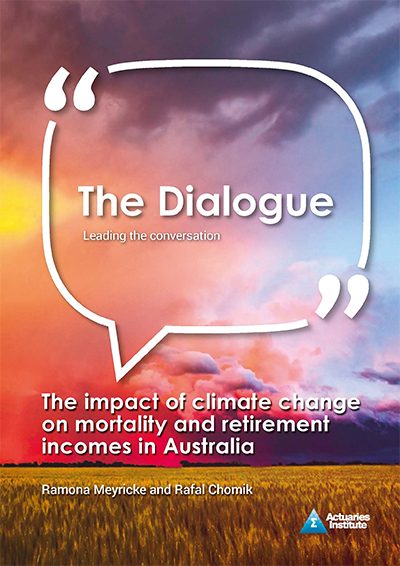 If you answered ‘no’ or ‘not much’ to these questions, the latest Dialogue published by the Actuaries Institute is a must-read. In ‘The Impact of Climate Change on Mortality and Retirement Incomes in Australia’ actuary Ramona Meyricke and economist Rafal Chomik collaborate to explore these issues and provide illustrative modelling of the impact climate risk might have on individuals, insurers and government. Through a combination of an extensive literature review and illustrative modelling they demonstrate climate change is a material issue for each of these stakeholders, building a case for informed planning and action.

While Australians are increasingly aware of the physical and transition risks[1] associated with the economy moving to a lower carbon footprint, we have a much lower understanding of what climate change could mean for us personally, especially in terms of health and living standards.

Listen to “What does climate change have to do with your retirement?” on Spreaker.

Listen to the podcast, read the transcript, or keep reading for a breakdown of the conversation.

Sadly, there is a greater risk of death in future climates. Heatwaves ꟷ which have killed more Australians than bushfires, cyclones, earthquakes, floods and severe storms combined since 1890 ꟷ are projected to become more frequent and longer lasting, particularly in the north of Australia. The scientific projections are confronting.

The number of heatwave days will at least triple in all capital cities by 2060-80 compared with the recent past.

Excess mortality from heat will double for all-ages and at least quadruple for over-65s (reflecting the greater vulnerability of older people to heat risks, particularly for physiological reasons). Morbidity risk is also expected to increase, although the data for understanding this risk is less rigorous and not explored in detail in the Dialogue.

Life insurers and annuity providers need to understand the changing mortality risk and consider assisting their policyholders to better understand and protect against the risks of extreme heat.

There is also the risk our retirement incomes will fall short of expectations. Although many actuaries are aware of the need for investment portfolios to be diversified for the risks of climate change, they may be surprised by how valuable that protection could be.

Illustrative modelling shows that for a median full-time earner, the ‘cost’ of inadequate portfolio diversification to climate change could compound, over a life-time, to an individual’s superannuation balance being 18% lower at the time of their retirement and their retirement income being 5% lower. (Retirement income is not as significantly impacted as balances due to increased eligibility for the Age Pension offsetting some of the effects.) This is a loss of nearly $70,000 in balance and about $2,000 p.a. in income, in today’s wage terms.

Our retirement incomes could also be impacted by shocks to employment due to climate change. Individuals could face an increased risk of unemployment because some jobs will be displaced as the economy transitions to new cleaner technologies and industries. This could result in periods of reduced earnings, and therefore contributions to superannuation, as individuals retrain or search for new jobs.

Individuals could also face an increased risk of unemployment due to a higher frequency and severity of natural disasters from climate change. Furthermore, if premium rises or other factors worsen the problem of under-insurance, there is a risk that in the future the disruption from natural disasters could be worse than it has been historically. Again, this could translate to reduced earnings and superannuation contributions.

The illustrative modelling quantifying this risk of reduced superannuation contributions shows for a median full-time earner, an individual’s superannuation balances could be 11% lower at the time of retirement and their retirement income could be 2% lower. (Again, the offsetting effect of the Age Pension reduces the effect on incomes relative to balances.) This is a loss of just over $40,000 in balances and just over $900 p.a. in income.

Individuals, life insurers, superannuation funds and annuity providers need to manage and protect against both investment return and employment/contributions risks. The illustrative modelling shows each of these could result in a significantly lower standard of living in retirement. The impact would be more severe if the scenarios are combined.

For the government, the impact of increased heat-related mortality due to climate change is more complicated. In a purely numbers sense, obviously higher mortality translates to reduced expenditure on the Age Pension, however if individuals have lower superannuation balances at retirement there will be some offset from an increased eligibility for the Age Pension. There is also the effect of a likely lower discount rate on future Age Pension expenditures given the lower investment returns (which have been assumed to include lower risk-free government bond yields). Other likely impacts include increased expenditure on natural disaster mitigation, adaptation and recovery through various programs, departments and levels of government.

The paper concludes that with ongoing improvement in public awareness and risk mitigation, the amount of excess mortality from climate change can be limited. It will be more complicated to mitigate the risk of negative long-term return implications for investors and governments.

“These are long-term illustrative projections and it’s in everyone’s best interests – individuals, insurers, government – if this risk is managed,” commented Ramona Meyricke in the podcast accompanying the release of this Dialogue. “Certainly no one wants to see the worst-case scenario.”

Co-author Raf Chomik stated, “You could describe both climate change and population ageing with the same superlatives: unprecedented, pervasive and profound. When you put these two megatrends together you may well have a perfect storm.”[2]

[1] Physical risks include the loss of assets due to the expected increase in the frequency and severity of natural disasters. Transition risks include the devaluation of assets adversely affected by consumers and investors moving to lower emissions technologies and processes.

[2] Rafal Chomik was the lead author on a series of reports on retirement incomes in Australia – http://cepar.edu.au/resources-videos/research-briefs