The government-hosted National Resilience Taskforce focused on natural disasters concluded on 28 June 2019 and has delivered a framework and a knowledge hub to foster greater collaboration across sectors in reducing disaster risks. This article gives an overview of the deliverables and points out where actuaries can potentially be involved.

Let’s answer another question first: Why do we need to be more resilient? In the context of natural disasters, Australia is one of the most exposed countries. Look at the effects of Tropical Cyclone Debbie: according to Swiss RE Australia’s assessments, it is the second most expensive cyclone in the Australian history and the 12th most expensive in the world in 2017. The total insurance payout is close to $1.69 billion.

The cost of natural disasters to Australian communities and economy is continuing to grow. The annual cost of natural disasters in Australia is expected to increase from $9 billion to $33 billion by 2050, according to a 2016 report launched by the Australian Business Roundtable for Disaster Resilience & Safer Communities. With no doubt, there is an escalating need to address disaster risk prevention and ensure our country is well-equipped to mitigate the impacts of natural hazards.

In April last year, the Department of Home Affairs commenced to host a National Resilience Taskforce focused on natural disasters. The Taskforce concluded on 28 June 2019 and has delivered several elements with accompanying reports. This article will discuss first two deliverables of the taskforce in Part 1 and will examine the third deliverable in Part 2.

The Framework sets the agenda for the foundation work needed across all sectors to reduce existing risk, prevent new risk being created and ensure we have the information to do so.  It captures a shared vision by 2030 for decision makers across all sectors of the society to make disaster‑risk informed decisions, be accountable for reducing risks within their control and invest in reducing disaster risk.

The report identified key drivers on the need, not only for this framework but also action by all sectors. Firstly, natural hazards are more frequent and intense, driven by Australia’s changing climate. Secondly, essential services are increasingly more interconnected and interdependent – just think of how dependent Australians are on reliable food, water, energy, telecommunication, transport and financial services, as well as how these functions rely on each other. Thirdly, people and assets are more exposed due to our growing and ageing population, as well as new urban developments. Fourthly, think beyond the financial costs of natural disasters – impacts of disasters can be longer term, complex and intangible – from the immediate losses of homes and loved ones to longer effects such as reduced education and workforce participation, increased crime, and physical and mental health issues.

The Framework outcome by 2030 is “the substantial reduction of disaster risk and losses in lives, livelihoods and health, and in the economic, physical, social, cultural and environmental assets of persons, businesses, communities and countries.” It sets out four priorities: understand disaster risk, accountable decisions, enhanced investment and governance ownership and responsibility. Within these priorities, 5-year outcomes have been outlined to ensure accountability and also a revision point. The guiding principles include encourage inclusive engagement and continual improvement. The actuarial profession is often engaged in giving public policy and private sector advice and this is an area where we can contribute. Another guiding principle is ‘data-driven decision making’ which really is a core actuarial skill.

We cannot stop natural hazards from happening but we can prepare ourselves better. Reduce disaster vulnerability across our systems is possible. Policies and behaviours to reduce the likelihood or consequences of disasters need to focus on the root causes and effects of vulnerability. We need collaboration and coordination between multiple and diverse stakeholders across jurisdictions and socio-economic sectors to be able to develop our understanding of these systemic causes and effects and possible mitigation strategies. This may require rethinking existing objectives and addressing gaps or misalignments in existing mandates, roles and responsibilities. It is with this perspective that the report explores new ways of thinking about our vulnerabilities to disaster.  It highlights systemic patterns (how interconnected and complex our systems are) and values traded-off in decision-making at all levels.

The report highlighted several causes of our vulnerabilities but a few stood out. One such trend is the significance of interconnected systems. Individuals, communities and organisations have become increasingly reliant on a number of highly interconnected systems to provide them with critical services. If we consider the social consequences  as if we were to lose access to any one or more of these critical services (like the ability to use electricity, buy food or fuel, flush the toilet or communicate with family members), we immediately become aware of our vulnerability in dealing with and recovering from disruptions.

A real-life scenario was when South Australia experienced an extreme weather event on 28 September 2016 which brought thunderstorms, destructive winds, large hailstones and heavy rain. Between 3.00pm and 4.00pm tornados moved across the State which damaged 23 transmission towers and at 3.48pm triggered a State-wide power outage. The significance of wide-spread power loss over several hours and in some areas days, identified new challenges for State and local governments, businesses, and individuals. There were problems associated with loss of power, including access to (or lack of) basic needs such as food and water, medications and telecommunications. Business continuity plans across the business sector and within government departments including emergency services, proved to be inadequate – they lacked contingencies for back-up power and the planned contingencies failed.

Another cause is the placement of communities, infrastructure and assets. People, housing, infrastructure and assets are most susceptible to impact when they have been physically placed in areas more exposed to natural hazards, and when the standard to which they have been built does not meet contemporary or disaster resilient building standards. Collective decisions on where to place housing, infrastructure and assets in particular locations can encounter conflicting interests such as ensuring equitable access to affordable housing; providing high quality and safe housing and infrastructure; providing enjoyable life experiences (i.e. for a growing population); or providing an economic return (i.e. to the building industry or to real estate developers). Decisions need to be made to prioritise some factors over others.

“When I went to live in Brisbane in 1977, I found that every estate agent had a flood map, showing the depth of water in the devastating 1974 flood. Nobody bought or rented property without studying the map to evaluate the risk of flooding. Then the Wivenhoe Dam was built, and optimists claimed that Brisbane would never again be flooded. I pointed out at the time that the reservoir would only act as a buffer until it filled, after which water would need to be released to protect the structure. Flood maps gradually disappeared. By the early years of the twenty-first century, people were both buying properties and building new dwellings in places where there had been several metres of water in the 1974 flood. In early 2011, a period of heavy rainfall meant the operators of Wivenhoe Dam were forced to release water and Brisbane was again flooded, to similar levels as in the 1974 flood.” Prof Ian Lowe (Emeritus Professor of Science, Technology and Society and former Head of the School of Science at Griffith University)

Although we are not in the profession of town planning – how can actuaries help? One of the sections in the report discusses risk assessment, ownership and transfer. It has been recognised that assessing risks across multiple hazards and timescale, under rapidly, variable and uncertain conditions, is difficult and complex. Traditional approaches are coming under increasing pressure to change. Many of these approaches are heavily dependent on recent historical data and being able to confidently assume the future will be much like the past and present – but with the climate change issue in the background, this is unlikely to be the case. Probability-based risk assessment has its limitations as well. As builders and users of those models, we, actuaries, are in a very good position to develop enhanced models which can consider a greater range of possible outcomes as well as to give advice to decision makers on the interpretation of results.

With a greater and more common understanding of our country’s vulnerability to natural hazards across all sectors, the goal is to drive collaborative decision-making and action-taking that will make us more resilient.

The following diagrams are extracted from the report which shows us where we are now and where we can be. 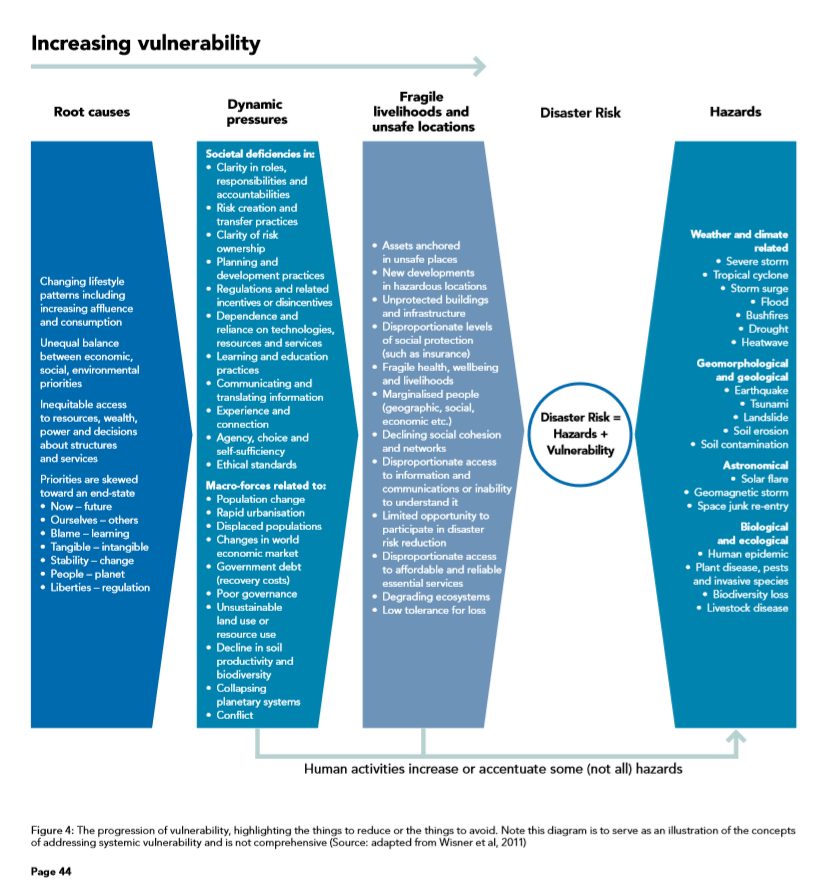 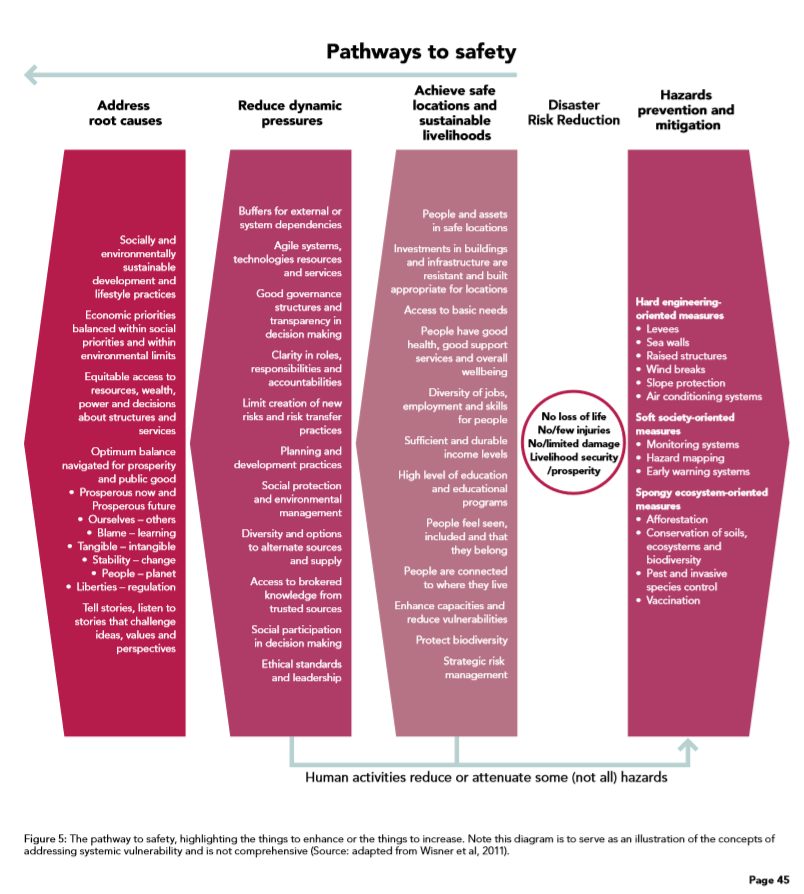 I’ll close this article with another quote from Professor Ian Lowe:

“We need to remember that the future is not pre-determined in any important sense. It is not an unknown land into which we totter unsteadily one day at a time, but an extension of the present that we shape by our decisions and our actions. The future is not somewhere we are going but something we are creating. We all have a role in shaping Australia’s future.”

Kitty is the Casualty Underwriting Manager for Munich Re Australia. She is also an active Institute member, being part of the General Insurance Practice Committee, Actuaries Digital Committee and the Cyber Working Group Committee.