by Kitty Ho and Andy Cohen

To kick start the new year for fellow general insurance actuaries with a sneak peek of what’s to come in 2019, Kitty Ho interviewed Andy Cohen, Principal at Finity Consulting and the chief editor of Optima.

2018 could somewhat be described as an eventful year for the general insurance industry – early experiences of the NSW CTP scheme reform (and the subsequent review by the NSW Legislative Council’s Standing Committee on Law and Justice), Royal Commission into Financial Services, ACCC’s Northern Australia Insurance Inquiry, dwindling profitability of short tail commercial lines.

For full details on how the industry performed in 2018, I refer you to Finity’s annual publication “Optima – General Insurance insights 2018”.

But what will be in store for the industry in 2019? What’s the outlook ahead? 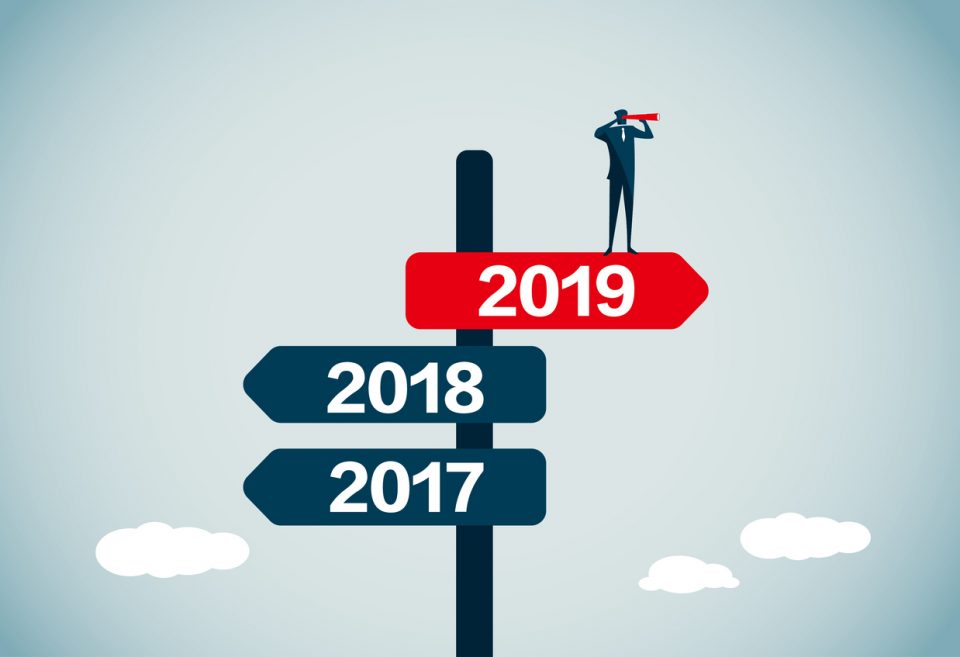 What are the three key macro level trends that will drive the industry in FY19?

“For 2019, the three key trends that any general insurance actuaries should pay attention to are:

What does this mean for industry profitability? Will the industry deliver adequate returns in FY19?

“FY18 was a pretty good year for industry, it reported a 15% return on capital – this good result was driven by benign weather well below average levels, reserve releases in long tail classes and rate increases in personal lines. For FY19, the interacting dynamics of the three macro level trends outlined earlier will drive the industry’s performance.  It’s hard to say and a lot depends on weather outcomes also … but I think upsides coming from rate increases will be offset by pressures from lower reserve releases, claims inflation in some classes and weather/cat claims costs at higher levels than in FY18.  Overall, we estimate it will still be a good year for the industry – returns on capital still in the 10 to 15% range – but perhaps we will look back and say FY18 was the peak.”

What else should general insurance actuaries watch out for in 2019?

Andy highlighted the ‘Tort Temperature’ – a measure of the extent to which the claims environment is more favourable for claimants or more favourable for insurers.  We are seeing the temperature going up (bad for insurers) in the Financial Lines classes of business.  The diagram below, drawn from Optima, highlights the many areas of claims pressure in this class and explains why we now assess the tort temperature as having moved from warm to hot. 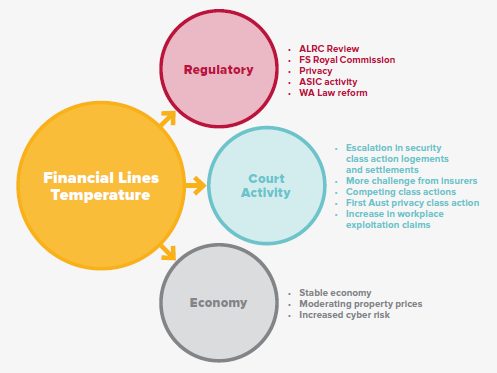 “The headwinds in Financial Lines include increased regulatory focus, escalation in security class actions, increase in workplace exploitation claims and increased cyber risk.  Not all insurer portfolios are equally exposed to these issues.  But actuaries will want to understand their clients’/insurers’ exposure and carefully consider all these factors in pricing and reserving.”

And for the Liability lines of business?

“Liability lines have run well since 2003 as a result of the tort reforms at the time.  Initially, loss ratio levels of 30-40% were not unheard of in this class back in the early 2000s.  This resulted in returns on capital well above target.  However, over a number of years, competition has diluted profit margins and we estimate the Liability class is now running in line with, rather than above, target.”

While returns are currently on target, Andy alluded to a warming of the claims environment that may indicate risks to maintaining profitability at current levels.  These include a High Court judgement that expanded the scope of common law damages to include superannuation, increased regulatory focus on the treatment of claimants, Royal Commission impacts more generally, increasing frequency and size of mental harm claims, the potential for Child Sexual Abuse Redress Scheme claim impacts to spill over to insurance policies and class actions.  Pricing and reserving actuaries will no doubt want to keep an eye on these areas.

While only an anecdotal indication of the current environment, Andy also mentioned an article he had seen showing the most expensive keywords in Australia for online searches that are “purchased” from Google. In 2016/17, the most expensive word was “lawyer”, which was double the next closest – “workers compensation” and “insurance”. While not directly indicative of tort temperature this suggests that law firms are advertising, it is competitive, and law firms believe that this is financially worthwhile.

On wrapping up the interview, we discussed the topical Opal Tower incident and wondered which insurance lines of business will be impacted? Professional Indemnity, across a number of professions (certifiers, engineers)? Liability? Or perhaps all of these? Regardless, Andy made a bleak comment that up to now, the premium pool for Financial Lines is low relative to its susceptibility to high profile cases such as this one with its propensity to trigger large losses.

Post-interview, I walked away with the feeling that Andy had a cautiously optimistic view of the industry’s profitability for FY19 (returns on capital lower than FY18 but still in the 10 to 15% range), but there were a few headwinds for actuaries to consider in their daily work.

What’s your view and feelings on the general insurance industry’s outlook?

Kitty is the Casualty Underwriting Manager for Munich Re Australia. She is also an active Institute member, being part of the General Insurance Practice Committee, Actuaries Digital Committee and the Cyber Working Group Committee.

Andy is a Principal of Finity Consulting Pty Limited and has 30 years’ experience in the general insurance industry. Andy began his career in London as a Lloyd’s broker, then worked for a London Market reinsurer but finally ended up in Australia as a consulting actuary over 20 years ago. Andy has extensive experience across a range of areas including workers’ compensation, reinsurance, travel and professional indemnity. He is or has been the Appointed Actuary to 13 insurance and reinsurance companies.