The team at Berry Actuarial Planning recap the highs and lows of the global economy and share market throughout the 2020-21 financial year, and offer advice on approaching the market in the year ahead.

Over the last few months, as inflation concerns rose, we have started to see a more significant rotation out of growth stocks and into value stocks. Flavour-of-the-month tech stocks such as Tesla and Afterpay have fallen around 25% and 23% from their respective peaks in February. Although there has been some pullback from the May lows that the tech sector saw, this event has shown how fickle their evaluations can appear.

Crypto has also taken a hit as many question the viability of it as a store of wealth and as a currency. The recent Colonial Pipeline ransomware attack in the US has highlighted the hurdles that crypto is yet to overcome as it remains a haven for tax evasion, crime and terrorism. At the same time, many real assets such as commodities have seen large appreciations driven by these same inflation fears as well as rebounding economic activity. The chart below compares the 1-year performance of NDQ (Betashares Nasdaq 100 ETF, mainly comprised of US tech companies) and VGMF (Vanguard Global Multi-Factor Active ETF, a largely value driven fund). Up until the last few months, NDQ was a clear outperformer, but now this has been flipped. 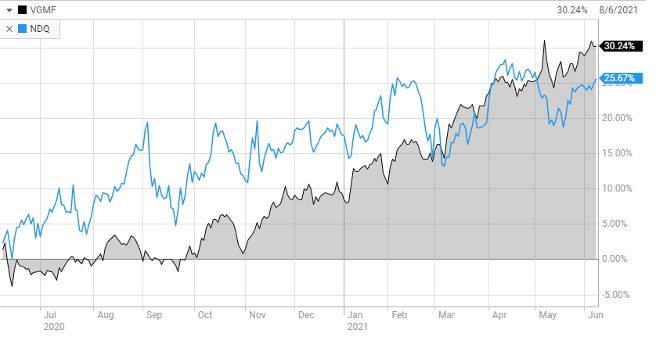 The RBA has indicated that they intend to keep the cash rate unchanged at 0.1% for the next 3 years. They have also been controlling the 3-year government bond yield at 0.1%[1]. The initial expectation was that the RBA would keep rolling this every six months to maintain the three-year yield. Earlier in July, the RBA Board announced that the target would continue to apply to the then-current three-year Australian Government bond – the April 2024 bond. Below is a chart of the implied 3-month bank bill yield as at December 2020 and March 2021. There has been a clear increase, which could support the notion of rates rising within the next 3 years.

We note that the recent US monthly inflation report indicated that, over the past 12 months, core inflation has seen its largest increase since 1992. At the same time, however, bond yields fell on the announcement, indicating that the market was either expecting a higher inflation rate or is looking through this figure and discounting it as short-term noise.

Moreover, the ASX200 is trading at all-time highs and business confidence in Australia (according to the NAB April 2021 Business Survey) is also the highest it has ever been. Given that JobKeeper ended in March, it is apparent that the economy is now running along without this large fiscal stimulus propping it up. And note that, although the ASX200 is trading at records, it has taken around 14 years to get to this level after the GFC in 2007. Moreover, this does not take into account inflation. From this perspective then, current market valuations may be sustainable, even under the shadow of inflation creeping in.

Given high business and consumer confidence as well as continued monetary and fiscal stimulus, we could see the current bull market continue for some time. The market now almost expects central banks and governments to step in at the first sign of market wobbles, which has helped spur on market optimism. At the same time, we are positioning portfolios to better weather adverse impacts such as inflation. This involves selling down stocks that have benefited from the market froth (but which may be the first to fall on negative news) and rotating into companies that are less sensitive to these shocks.

This reiterates our recommendation to focus further investment on value-orientated stocks. This generally encapsulates sectors such as consumer staples, infrastructure and materials. In market theory, often after the trough of a recession has passed value stocks tend to outperform growth stocks. In fact, this is often one of the few periods in which value outperforms growth. Moreover, sectors such as these that hold real assets usually do better in times of higher inflation. With spending and investment at all time high levels and the RBA indicating that they won’t raise the cash rate until at least 2023, we could be entering a period of higher inflation for the next few years.

The risk of rising inflation and subsequent increases in interest rates also makes us wary of significant investment in fixed income securities. With companies and individuals borrowing to record levels, the economy in general is greatly exposed to increases in interest rates. Hence, whilst risk free income investments such as term deposits do not offer an attractive return at the moment, we are being cautious about chasing yield by climbing the risk spectrum. As an illustrative example, to get an equivalent yield to what you were previously getting on a 2-year term deposit, you must now invest in lower-end investment grade debt. In the long run, this cannot be an equilibrium level for markets. We would rather sit on low return, safe income assets and utilise these funds in the event of a market downturn. Whilst risky income assets generally do not fall as much in a market downturn as shares, they can still see a fairly rapid and sharp price drop as investors flock to safe havens. Many modern hybrid securities, such as those issued by the banks, must comply with Basel III requirements. In the event of a large market downturn in which the banks’ solvency and capital ratios fall, these hybrid securities must convert into ordinary shares of the respective bank. So, there is ultimately limited upside with these securities, but at the end of the day you share a similar risk profile to an ordinary share (which can experience much more upside).

In summary, for the next year we will be focusing investment on value orientated sectors and continue to average into the market over time as opposed to trying to time exact peaks and troughs. Moreover, with the low returns currently being offered by fixed income securities, we would prefer to hold more cash ready to deploy into the market in times of distress.

Mark Berry is a Fellow of the Actuaries Institute. Mark started Berry Actuarial Planning in 2002 with the goal of applying actuarial skills to the provision of financial planning advice delivered in a professional transparent manner paid for by the customer to deliver their outcomes, thus enabling those seeking to be engaged with the management of their own financial plans to be empowered to achieve outcomes appropriate to their circumstances as opposed to outcomes that suit an institution.

Anthony Street is a Fellow of the Actuaries Institute with over 30 years of experience across life insurance, superannuation and investment management. In 2011, Anthony joined Berry Actuarial Planning to help individuals plan for and achieve their financial objectives, which Anthony believes can be strongly enhanced through the utilisation of actuarial skills to understand and manage future outcomes. Anthony previously worked for Macquarie Investment Management, in product and portfolio management roles, Mercer Investment Consulting in London, consulting to a range of UK pension schemes, and Zurich Australia as an Actuary.

Alexander joined Berry Actuarial Planning in 2017 as Financial Planner, and enjoys working with clients in all capacities, with a particular focus on investments. He is currently enrolled in the Chartered Financial Analyst (CFA) Level 2.

Building a culture for success

by Brayden Slade and Actuaries Institute