Lesley Traverso, former Chair of the Actuaries Institute’s Diversity and Inclusion Working Group, delves into how her independent ‘Identity in Actuarial Careers’ survey came about and its key takeaways.

I recently carried out survey of the Australian actuarial profession to delve more deeply into how actuaries present their identity in the workplace. Our professional identity is just one of a number of identities that we own, others may be our gender, ethnicity, sexual orientation, class, etc. All of these various identities are impacted and shaped by our upbringing, family, experiences, and a selection of those different identities can come to the forefront at any one time depending on who and where we are interacting with those around us.

In the context of the workplace, those parts of your identity that are about values, views, perspectives, opinions, attitudes and priorities need to be in concert with those of your employer to be able to be truly yourself at work. This ‘workplace identity’ is two-fold; the identity we have that is ‘received’ by the workplace, and the influence the workplace has on the construction of that identity.

So, it is an interactive and two-way process. Research has indicated that workplace and work identity, particularly in small ‘elite’ professions, is stronger than gender and ethnicity identities, meaning that the strength of association with the profession provides an opportunity to maintain a strong feeling of belonging to a work identity even when society may place challenges on other aspects of a person’s identity.

For this research I chose to focus on how one’s professional identity interacts with identities of gender and ethnicity. These are the most discussed/researched and easily identifiable aspects of identity and therefore those which provide the greatest opportunity for actionable insights. There were 360 responses to the emailed survey and 45 were interviewed on the telephone subsequently.

One delightful outcome of the survey showed that within the actuarial profession, there was a tremendous obligation to support one’s peers, the sense of ‘togetherness’ and pride in being a member where there is genuine opportunity to work for the benefit of society and to do a role that can make a difference, were all a core part of an Actuaries’ identity.

The questionnaire asked how different aspects of identity had impacted on the persons professional lives. Those who identified as female in the survey overall felt that in a profession with an emphasis on exams and technical competency, gender shouldn’t really matter. There were several observations that societal norms of the 1970s and 1980s influenced opinion as to whether or not women could do an actuarial role, but in more recent years the actuarial qualification has provided women with the credibility to acquire Directorships and other senior positions, making gender less relevant. This did not however negate the challenges that come with balancing work life and family responsibilities.

The ability to progress in an organisation is often related to an individual’s ability to acquire ‘social capital’, this is the concept of gaining credit from developing key influential relationships, attending office functions, social events, developing a personal brand etc., all of which can be challenging for many people. A number of respondents from non-Anglo cultural backgrounds who had not been born here, or had arrived as a child, felt that they often had two hurdles to overcome, an unfamiliarity with the local business culture and an insecurity about their English language skills.

The question “in your work environment, do you think that your career has been impacted (either positively or negatively) because of your gender, ethnicity or other factor?” was asked, revealing 61.4% felt that gender had an impact on their career and 51% that ethnicity had an impact. These are, of course, not necessarily negative.

A number of both men and women made conscious choices to put their family life as a priority over long hours and the actuarial profession gave them the ability to do that whilst still enjoying the intellectual stimulation.

Similar to comments about gender impacts, those concerning ethnicity also formed into a number of themes. For those of non-European heritage, there were not only challenges around developing sufficient social capital, as described previously but in addition, there were issues of ‘cultural capital’ as well which are the shared tastes, experiences, leisure pursuits, and self-presentation styles that matter in both the hiring of and retaining of staff.

An observation that has been commented on previously is the lack of people from non-Anglo backgrounds in senior positions. The Institute looked at Chinese membership names and compared these by age to the membership as a whole. Although this is only a rough indicator and does homogenise members’ ethnicity, it does seem to indicate that members with a certain background are a small percentage of all members in older age groups, but that there is less of a disparity at younger ages. This may indicate that a large percentage of people from overseas backgrounds return to their home countries in their late 20s or early 30s. That assumption is consistent with a Macquarie University survey which showed that in 1997 75% of students were from non-Anglo backgrounds. 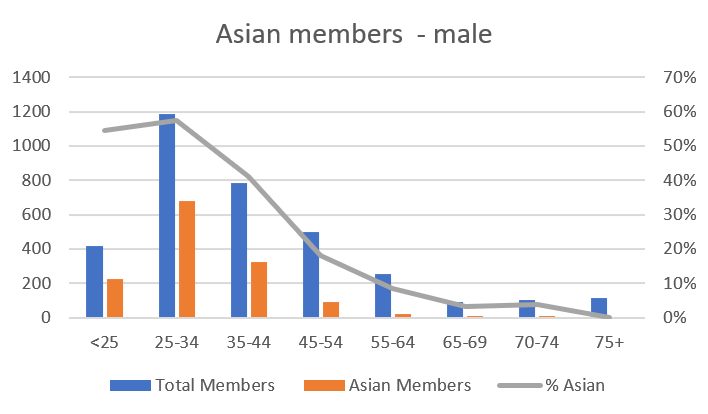 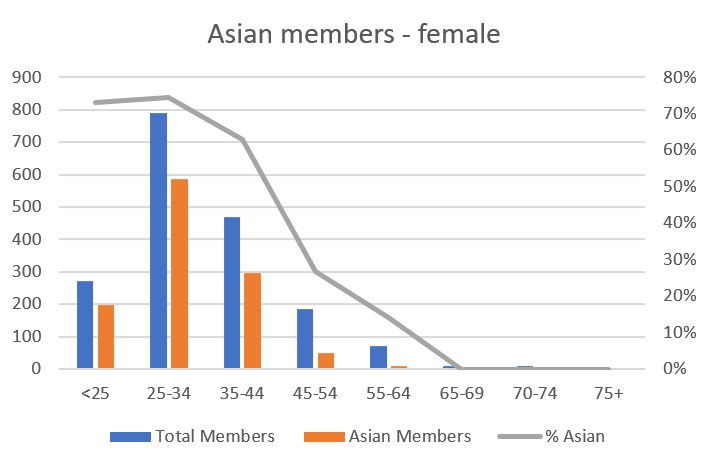 Generally speaking, the answer to the question of whether the profession was a meritocratic place for women was generally ‘yes’. Female actuaries’ experiences often reflected broader society of a time, and that the women make choices around their family structure that affected how they saw their own identity and others’ perception of them. Interestingly, several male respondents noted that they had observed a certain privilege afforded to them over the years that they were able to take advantage of.

Creating equality of opportunity for everyone is not about making everyone ‘be’ the same.  Both life and business thrive on diversity of thought when people come together to solve problems, create solutions, support personal growth and celebrate their individuality. But inevitably there are some aspects of working life that can challenge aspects of a person’s identity and hold them back from being as good as they could be. Below are some suggestions from the survey respondents that could be adopted:

These were some of the initiatives that people I spoke to for the survey had undertaken:

The survey was the first of its kind to be undertaken within the Australian profession and has brought some valuable insights to the surface which were explored in the recent Actuaries summit presentation. It is clear that the professional identity of ‘Actuary’ contributes to many people’s feelings of pride and belonging, and the nature of the actuarial profession itself is not as prone to the level of biases and inhibiting factors that people in other professions experience.

With over 20 years of experience recruiting Actuaries around the globe, Lesley brings a broad and diverse approach to Actuaries Digital. Lesley has been part of the organising committee for the Actuaries Summit for the past 12 years and is known for her creative ideas and an off-beat sense of humour. Not one for always relaxing quietly, Lesley enjoys the freedom of flying airplanes via her Private Pilot’s license, often upside down!