Since the Omicron variant was first identified as a variant of concern, everyone wants to understand the severity. An initial study in South Africa suggests Omicron is less severe, whereas a UK study finds no difference. My view? Still too early to tell.

There are two main published analyses of severity so far (neither peer-reviewed) based on substantial population-level data from South African and the UK. But even substantial data is still very early in this outbreak.

Whereas from the UK, the Imperial College UK also looks at infectiousness, but also the severity. This analysis is based on a total of 208,971 S+ and 15,063 S- cases with complete data (this is using the PCR test, which has a specific “S-” to identify Omicron, which they have analysed as being very closely matched to full genetic analysis).  For hospitalisation rates they reach this conclusion:

This comment is based on an outcome that Omicron cases are 95% as likely to be in hospital as Delta cases, with a potential range around that number of (0.61-1.47).

So the South African study suggests that a vaccinated individual is more likely to be hospitalised by Omicron than Delta (30% chance of hospitalisation, compared with 7%) but that after adjusting for vaccination status, adults are experiencing a 29% lower admission risk compared with earlier waves, and once hospitalised, less likely to be seriously ill. The Discovery study doesn’t give statistical significance.

The UK study, on the other hand, suggests no change in hospitalisation rates.

Hospitalisation rates could look lower in these studies than in reality for a few reasons:

Hospitalisation rates could also look higher in these studies than reality because:

This Twitter thread from Epidemiologist, Marc Lipsitch, was very helpful in understanding these two studies if you’d like to read more.

This picture from @nataliexdean explains one aspect of why analysing severity is hard, now that we have the complication of imperfect immunity (protecting against severe infection, but not reinfection). 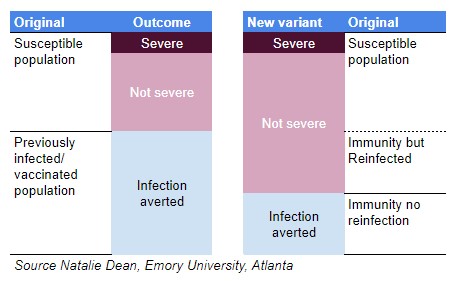 To measure severity in a real outbreak, you need to look at the proportion of cases that end up being hospitalised or worse. Simple, right? Not quite. In the original outbreaks around the world, everyone was susceptible. So the severity of the original strain of SARS-CoV-2 could be measured based on the whole population. But now, everywhere around the world has some combination of previous infection or vaccination. In general, those who have been vaccinated are more likely to be those at higher risk of severe disease. So the Delta outbreaks in the UK in 2021 ended up with lower infections and less severe disease. But Omicron appears to infect everyone, whether they have some immunity (through vaccination or previous infection), or have no immunity. If those people who are somewhat immune end up with less severe disease, then it looks as if the variant is less severe overall.

But it might just be that vaccination averts the serious disease, but those without immunity end up just as sick. So Omicron could be less severe in everyone who gets infected. But if twice as many people get infected with Omicron as would have got infected with Delta, then Omicron might have half the severity but the same number of people get seriously ill.

So to get a really good measure of the severity of a disease, you need to understand the immunity status of all cases and compare them with severity. Both studies attempted to do this, but it isn’t easy.

For me, deep-diving into these studies confirms that you are much safer with vaccination, particularly if it is an mRNA vaccine, and especially if you have had a third dose and/or the previous infection. It does seem plausible that the disease could be a little less likely to cause hospitalisation than Delta was. But as I noted in my last post, hospitals could still be overwhelmed even with milder disease.

I’ve found that most commentators seem to gravitate to the study that confirms their initial views. I’ve tried not to be influenced by my initial thinking, but for transparency, my initial thought was that the new virus variant should be assumed to be equally severe unless proven otherwise.

I agree with your analysis Jennifer. I also had the same initial thought and I am hoping that my initial hunch will be proven wrong. It is a bit difficult to get a booster vaccination at present as most doctors and pharmacists are booked out until February, which will probably be well after we have caught Omicron without returning to restrictions. My wife and I found a very small reasonably local Pharmacy that has a good supply so we are getting ours tomorrow. That Pharmacy will get my future business.

I agree too. The South African analysis was not compelling. The result appears to have much more to do with the much higher levels of immune preparedness (vaccines and prior infection) of the population now being exposed to Omicron compared to when they were exposed to Delta than with the intrinsic pathogenicity of Omicron itself. A much more careful analysis with a lot more work on removing the systematic bias in their sample is needed before the claims they made can be justified.

The Imperial College study was much better constructed and their conclusion much more reliable.

I think that it is fair to say that the studies indicate/suggest that severe illness, hospitalisations and deaths caused by Omicron will be lower in the vaccinated than they were amongst the unvaccinated due to Delta. This is a good thing given our levels of vaccination, but no justification to just let it rip with a retreaded herd immunity strategy. The unvaccinated are mainly children and there are worrying studies (not yet definitive) that Omicron is more pathogenic amongst children than Delta was.