The Actuaries Institute’s Climate Risk Working Group summarise the main outcomes of the International Panel on Climate Change (IPCC) Assessment Report 6, and look into the aspects most relevant for actuaries.

The International Panel on Climate Change (IPCC) was created to provide policymakers with regular scientific assessments on climate change, its implications and potential future risks, as well as to put forward adaptation and mitigation options. Through its assessments, the IPCC determines the state of knowledge on climate change. It identifies where there is agreement in the scientific community on topics related to climate change, and where further research is needed. The reports are drafted and reviewed in several stages, thus guaranteeing objectivity and transparency.

The latest report, IPCC Assessment Report 6 is the most up-to-date physical understanding of the climate system and climate change, bringing together the latest advances in climate science, and combining multiple lines of evidence from paleoclimate, observations, process understanding, and global and regional climate simulations.

IPCC AR6 has been dubbed ‘code red for humanity’. It warns of a future of increasingly extreme heatwaves, droughts, fires and flooding. But it also shows how the worst impacts can be avoided if the world acts fast to cut greenhouse gas emissions.

The report has been covered extensively, so in this article, after summarising the main outcomes, we look at some aspects that are particularly relevant for actuaries.

Better observational climate data and models have led to improved understanding of human influence on the weather and climate extremes. Previous IPCC predictions of the impacts of climate change were too conservative. Global warming of 1.5°C above pre-industrial levels is now almost certain by 2050. The current and future impacts of 1.5°C (the scenario with the least warming) include:

At 2°C global warming and above, the level of confidence in and the magnitude of these impacts increases compared to those at 1.5°C.

There is some good news in AR6. Future impacts will be shaped by how hard and fast we can cut global emissions (and large cuts are possible with existing technologies). AR6 uses a set of five illustrative scenarios of future emissions from 2020 to 2050, showing the amount of warming expected along alternative scenarios. These are summarised in Figure 1. The actual impacts experienced in the future will depend on future cumulative emissions.

Figure 1: Illustrative scenarios of future emissions from 2020 to 2050 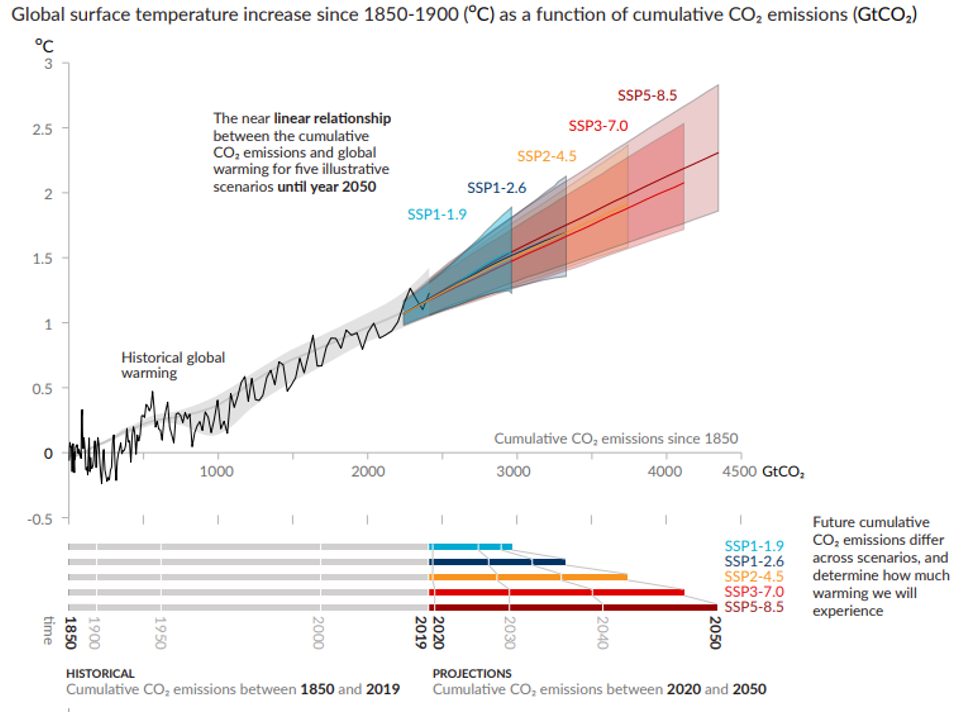 The previous IPCC Special Report (SR1.5) published in 2018 and the AR5 published in 2014 showed that it was necessary for us to achieve net zero emissions by 2050 to achieve the Paris Agreement objective of limiting global warming to well below 2°C. Limiting global warming to 1.5°C would require “rapid and far-reaching” transitions in land, energy, industry, buildings, transport, and cities. So governments and organisations have been setting targets to achieve net-zero greenhouse gas emissions by 2050 (or earlier).

Previous IPCC predictions of the impacts of climate change were too conservative. Global warming of 1.5°C above pre-industrial levels is now almost certain by 2050.

Figure 1 above showed that global warming now is expected to hit 1.5°C “in the early 2030s” in almost all emission scenarios, 10 years earlier than the midpoint of the likely range assessed in the SR1.5. Figure 2 below shows that temperatures have been rising faster than in previous IPCC assessment cycles.

Figure 2: IPCC projection of temperatures in AR5 and AR6

Improved knowledge of climate processes and evidence, AR6 gives a best estimate of equilibrium climate sensitivity of 3°C with a narrower range compared to AR5. Figure 3 below shows the changes in estimates of ECS over time.

Figure 3: Estimates of ECS in all IPCC assessments

ECS is the sensitivity of the Earth’s climate to increases in atmospheric CO2 concentration, which represents how much global temperatures will rise in response to human-caused CO2 emissions.

The cycle of test-and-learn  – make projections, monitor the results, review the model, assumptions and results, and then start the cycle again – should be familiar to all actuaries as we often call it ‘the control cycle’.

With every update comes new estimates by improved methodologies, updated evidence, and integration of results from multiple lines of evidence. For example, previous IPCC assessments observed warming of the climate system in AR4 and then investigated human influence on the climate system in AR5. AR6 now confirms there is strong evidence of the attribution of human influence on the observed changes in extreme weather events such as heatwaves, heavy precipitation, droughts, and tropical cyclones.

AR6 illustrated the urgency of rapid emissions reduction, even more so than the predecessor SP1.5 and AR5. The actual impacts experienced in the future will depend on future cumulative emissions. No doubt our actions, new evidences, and even new focus areas e.g. focus on extremes (more detail below) will feed into the next IPCC releases – and the control cycle begins again.

A new focus on extremes

Actuaries should welcome the newly added focus on extremes in AR6, which includes a specific chapter on weather extremes for the first time. Among the key conclusions, it notes that recently observed hot extreme events such as the Siberian heat wave in 2020 would have been ‘extremely unlikely’ to occur in the absence of the impact of humans on the climate system.

Significant scientific developments in attribution science, since the previous AR5 report has enabled scientists through use of enhanced models, to quantify with increased precision the impact of human activities on the intensity and likelihood of past extreme weather events as well as make more qualified predictions about future extreme events.

Projected changes in extreme (hot temperature extremes, extreme precipitation and agriculture and ecological droughts) are larger in frequency and intensity with every additional increment of global warming. 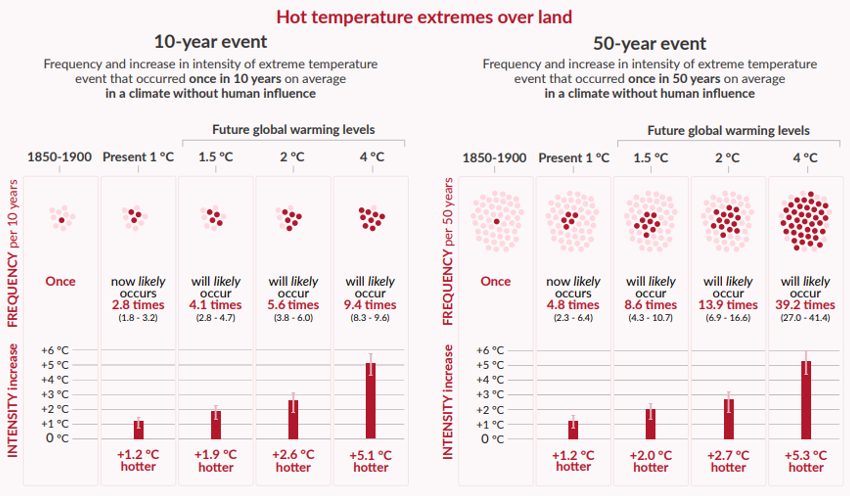 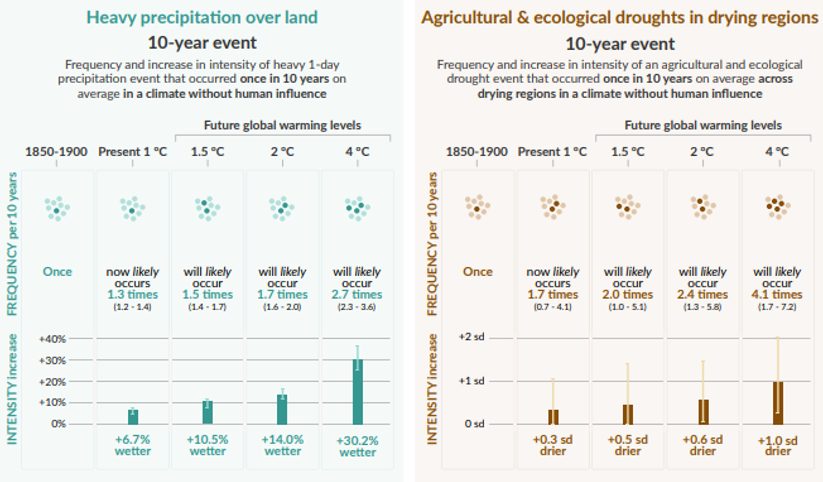 AR6 also considers compound extreme events (where two or more weather events occur together or in succession, leading to severe impacts) for the first time, such as concurrent heatwaves and droughts which are also projected to increase in frequency with every additional degree of warming.

This report warns of a future of increasingly extreme heatwaves, droughts, fires and flooding. But it also shows how the worst impacts can be avoided if the world acts fast to cut greenhouse gas emissions.

For further information, the report has an excellent summary for policymakers, which can be found here.

And many actuaries will be doing further work on how to use this comprehensive summary of the scientific evidence in our work in the altered climatic conditions that are already here, and are going to continue to get more extreme.

The Actuaries Institute has a Climate Risk Resource Centre which can be found here. It has more resources on the impacts of climate risk and what actuaries and other financial services professionals are doing about it.

Ramona is an actuary and a Director at Taylor Fry, with experience across the superannuation, life insurance, health and government sectors. Her recent projects have focused on using data, analytics and actuarial modelling to improve government, health and disability systems and services. Ramona is an active member of the Institute’s Climate Risk Working Group and has a particular interest in helping businesses and government manage climate transition risk.

Shweta is an Associate Director within EY’s Actuarial Services practice providing consulting advice primarily to Australian life insurers and reinsurers. She is a Fellow of the Institute of Actuaries of Australia (FIAA) and has a wide range of experience across reserving, capital management, product pricing and risk management, having worked across corporate and consulting roles for over 13 years. She is a member of the Institute’s Climate Risk Working Group.

How can we stop the NSW COVID-19 outbreak growing?