With the world’s attention on Trump’s COVID-19 infection, it was easy to miss another global record number of new cases, thanks to second waves in North America and Europe. Locally, Australian cases declined and New Zealand declared itself COVID-free for a second time, but cases in the Pacific have emerged. Research highlights concerns about a pandemic-induced spike in Parkinson’s disease and explores potential immunity to COVID from the common cold, while APRA resumes its work on Disability Income Insurance. 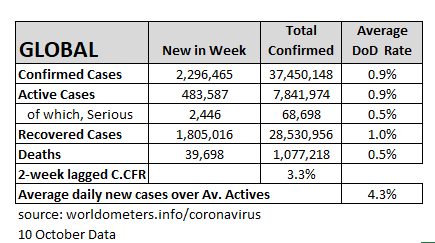 While regions like India, much of South America and (possibly) Indonesia and the Philippines are getting their first waves under control, their efforts are being outweighed by second and sometimes third surges in countries which were previously working toward control, particularly in North America and Europe. The WHO reported record daily increases this week and some fear transmission in these countries may increase further as winter approaches.

Despite substantial increase in weekly new cases rose, deaths rose only slightly and for a second week, deaths as a percentage of two-week lagged new cases were a record low of 1.92.%

Not in control: USA, Russia, Argentina

Locally, NZ declared the virus eradicated outside hotel quarantine for the second time, but there is an outbreak in French Polynesia and a low level of cases in PNG. A week ago, Solomon Islands had their first and only case so far.

Victoria recorded 72 new cases this week, up from 64 last week:

There were only four deaths in Victoria this week, down from 22 last week, all of which were associated with outbreaks in aged care. 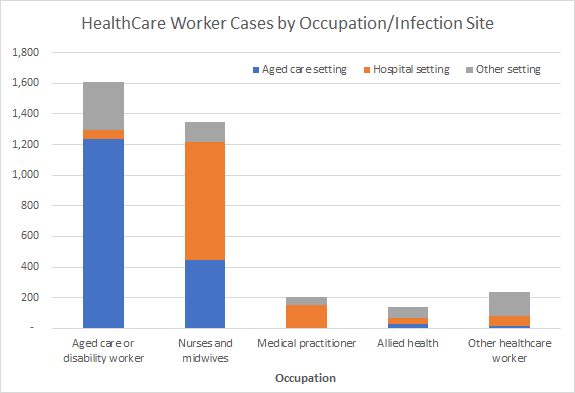 NSW reported 16 locally acquired cases after a run of 12 days without them. Six were linked to the Liverpool Hospital, 11 are from two new clusters with unknown source.

Could COVID cause a spike in Parkinson’s? Researchers are concerned that the five-fold that occurred after the Spanish flu pandemic could be repeated.

Mental health. October 10 was World Mental Health day and the WHO reports disruption to mental health services in most countries, while the Lancet highlights the mental health challenges seen in previous epidemics.

Novel virus not so novel? Researchers are currently exploring whether prior exposure to common cold viruses may offer some immunity to SARS-CoV-2.  If true, this has significant consequences for herd immunity.

Rapid testing may be a step closer. Point-of-care molecular tests for SARS-CoV-2 have shown similar accuracy to the standard lab-processed PCR tests, producing results in an average of just 1.7 hours.

Psychiatric Illness linked to COVID-19 mortality. Among 1,685 US patients hospitalized with COVID-19 between February and April, those with psychiatric illness had 1.5-times higher risk for death that was not explained by medical comorbidities.

The wealth effect in India. India’s case fatality rate has been lower than other countries, in part because those surviving to older ages are likely to be wealthier and hence less likely to come into contact with the disease.

Vaccine efficacy in older people is critical as they are most susceptible to serious illness. A recent phase I trial included 40 participants over age 55, and found antibody responses comparable to those aged 18 to 55.

Vaccine approval unlikely before US presidential election. New guidance from the US Food and Drug Administration mandates that before emergency use authorisation is sought, participants in phase three trials should be followed for a median of at least 2 months after their final vaccine dose. This makes it difficult, though not impossible, for a vaccine to be authorized before the election.

How actuaries can carry insurtech forward