As the nation steps up in tackling the Covid-19 situation, this dedicated blog series will cover updates of the pandemic as well as related issues that may impact our industries.

Welcome to this blog, which attempts to pull together relevant and current information about the COVID-19 disease outbreak.

A particular focus is information that risk managers should be aware of as they help guide their organisations through the outbreak. The blog is written from a specifically Australian point of view, but much of the observations are universal.

Just to state the obvious, the information in this blog is sourced on a best endeavours / good faith basis (and in a hurry), but the author-of-the-day takes no responsibility for the veracity of that information.

Further, the opinions and assertions made in this blog by the author-of-the-day are theirs, and theirs alone and do not necessarily reflect the opinions of other individuals or organisations, particularly not the Actuaries Institute. 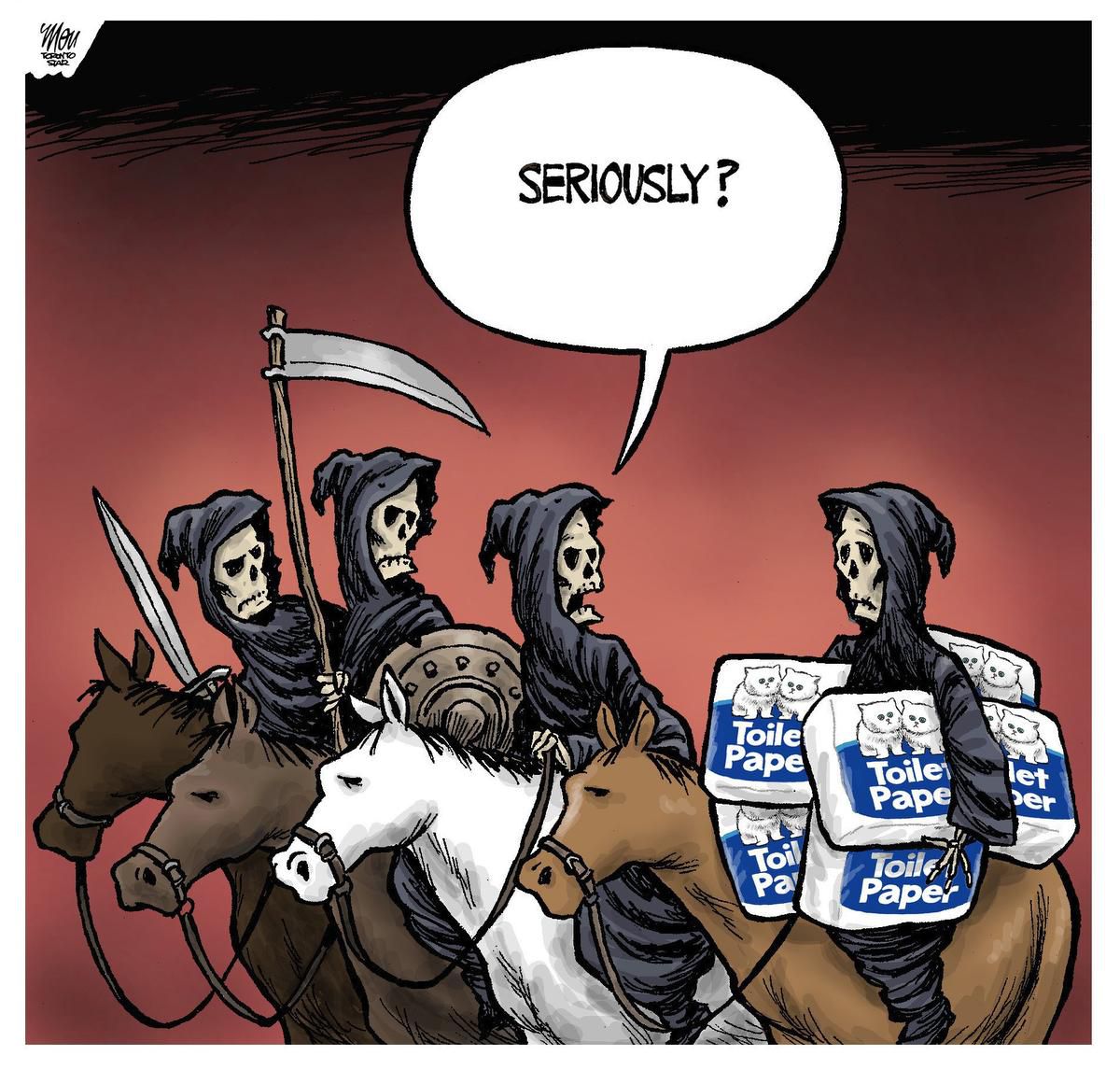 Love the way the cartoonist got the colours of the horses directionally correct – look it up. But even better is the bored look on all the horse’s faces – except the one who’s found something actually interesting elsewhere. Check out his ears.

I had an article published in ACTUARIES DIGITAL on 13 February based on data from 11 February.  The now-irrelevant crux of that article was that you should act quickly to review your pandemic plan. Was I Cassandra?

The article also pointed to several useful Australian Government or WHO sites where more information could be obtained, and it pointed back to a 2006 Pandemic paper by me that had useful sections regarding the mix of risks that financial services organisations might have. That paper also had some disease dynamics numbering that could be relevant to considering the potential impact of COVID-19 on your organisation.

On 9 March ACTUARIES DIGITAL published a Status Update by me based on 4 March data. From today’s perspective, its observations on age-specific and condition-specific –mortality, and -morbidity dynamics remain relevant and largely unchanged – although some better information is just starting to emerge.

WHAT’S GOING TO BE IN THIS BLOG?

Circumstances will dictate. And we’ll be avoiding repetition. But topics we’re expecting will appear consistently are:

It’s very unlikely any blog post after this will be anywhere near as long. There’s a bit of catch up needed in this first blog post, hence the length and the apology.

Two milestones of sorts were passed on 12 March.

Overnight, the number of cases and deaths outside China both overtook those in China.

I’ve been using this site: www.worldometers.info/coronavirus/ for much of my tracking and reporting. In my experience, it’s been a bit ahead of the curve of the official WHO reporting and It has lots of adjunct news, links and analysis, all usually well-sourced.

On the surface, the answer might be “Yes”. A virulent disease with zero prior human immunity that has gone pandemic.

I think a better answer is “Probably no”, not only at this point, but looking forward. My reasons are:

WHAT ARE NATIONS DOING?

Or rather, it works better than the alternative.

Everyone’s wholly legitimate fear is that COVID-19 will overwhelm healthcare systems, most of which are (my local observation) not far from a JIT system which is not always coping well with the normal flows and variations in flow of the day-to-day needs of their communities.

Any steps which can slow the emergence of COVID-19 and reduce its prevalence will massively lighten the burden on healthcare systems and the front-line warriors who run it; and so this is, rightly, the focus.

How do we know it works? China, South Korea, Japan and Singapore are all valid case studies (in my view) of reasonably successful suppression and containment.

On January 29, Singapore reported 10 cases. 46 days later, on 15 March they’re reporting 226 cases. Singapore is only a small country, but is also a very high density country. Their measures appear to have kept their outbreak to an infection rate of 39 per million persons.

On January 29, South Korea reported four cases. By 20 days later, it was still only 51 cases. By 30 days later, it had exploded to over 3000 cases and they were reporting nearly 1000 new cases a day. And by 40 days later they had over 7000 cases but were reporting only around 100 new cases a day. They have the 6th highest infection rate per million but their measures appear to have brought the new infection rate way down.

After a massive and extensive outbreak which dominated all the outbreak statistics until now, China has reported low and diminishing new cases for the last 13 days or so. It has won this through an aggressive suppression and containment strategy at the most culturally sensitive time (Chinese New Year).

Conversely, we know the alternative doesn’t work. China and Italy are my exemplars here.

Yes, I know I’m playing China on both teams. Their weak response to the initial emergence of COVID-19 created a massive problem for them (and the world) that still has them with 50% of all cases and nearly 50% of deaths-to-date. It’s very likely that a more effective initial response from them would have slashed spread, cases and deaths. To overcome that initial failing, they have had to implement measures that many other more open countries will struggle to emulate.

Italy’s (and, in fairness, other countries’) slowness to respond to the emerging situation in Italy has resulted in much of Europe and many other locations gaining multiple cells of emerging infection.  That was visible on February 28, but it took Italy another 11-odd days to implement robust containment measures. As a result, Italy has the highest reported infection rate, 409 per million – and that’s not counting their exports!

Despite now being dated, the following really good chart from the 12 March Sydney Morning Herald illustrates my points.

This site, shows, for each country, both how many days it’s taking for cases in that country to double, and a small chart of the progression of cases in each country. As of this morning:

WHAT SHOULD YOU AND YOUR ORGANISATION BE DOING?

You and your organisation have three important roles to play in managing this outbreak. Those roles have degrees of overlap:

All three roles will require knowledge, hygiene, responsiveness and supplies.

Knowledge: Arm your organisation and your people with knowledge about COVID-19; how it spreads, how to control its spread and how to nurse people who become infected, especially the severely affected. 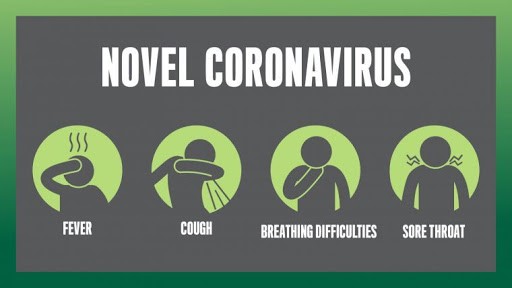 ARE WE EXPONENTIAL YET?

Up until 11 March, another cause for cautious hope (in my view) was the case progression charts. I’ve been following these since early February, and they had remained doggedly linear. There’s been some bumps and scares along the way, but, so far, it’s always settled down. Viewed with a logarithmic scale, it was always wanting to flatten out.

For the last few days, it’s not been so reassuring, but my guess is it will flatten out as existing infection cells run their course and containment measures help reduce the number of new infection cells arising. 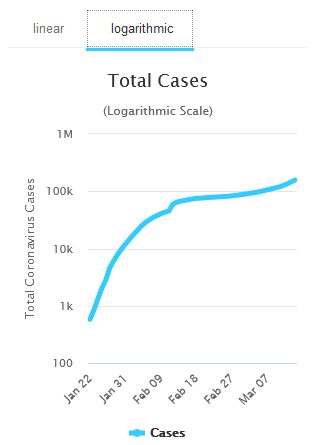 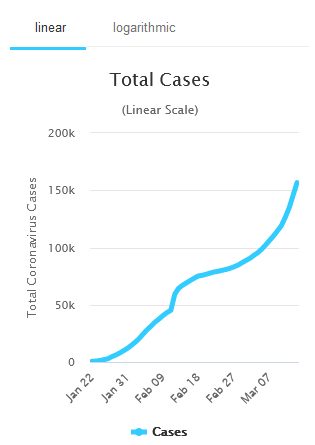 Source: Worldometers.info  15 March 23:25 GMT. Note that these are “all world” charts. Some single country charts can be found on their website, but not currently for Australia.

FACT: It takes just 34 iterations at an infectivity of two (ie each infected person then infects two others) for the number of cases to exceed the world population.

The 9 March ACTUARIES DIGITAL article referenced and summarised a Brookings Institute paper modelling possible economic outcomes of a COVID-19 pandemic.  Some of its results were quite severe, but as noted in the summary, the assumptions were of an uncontained pandemic. As I’m arguing above, containment appears to be possible.

On 9 March, McKinsey & company published a paper titled “Covid-19 Implications for business” (thanks to Past President Nicolette Rubinsztein for bringing this to my attention). In that, they explore 3 scenarios for the global economy – quick recovery, global slowdown and global pandemic and recession. My summary of the notable assumptions and results is:

On 9 March I was speculating that markets believed that there would be no serious health crisis and no deep economic consequences, having come off only 8% from record highs.

So much for the Efficient Market Hypothesis.

THE ULTIMATE TRADE OFF?

Countries are now having to make decisions that trade-off lives for economic growth.  By and large, they are prioritising lives by taking measures to:

Despite several more week’s development, the certainty around the disease’s dynamics has not much increased. The key facts (to my knowledge) are:

As a semi-closed system, Diamond Princess is instructive and perhaps represents an upper limit.  696 cases were identified out of 3711 guests+crew – a total infection rate of 19% in what all readily admit is a far from perfect quarantine environment. Note that not all the quarantine for all passengers was spent on board. 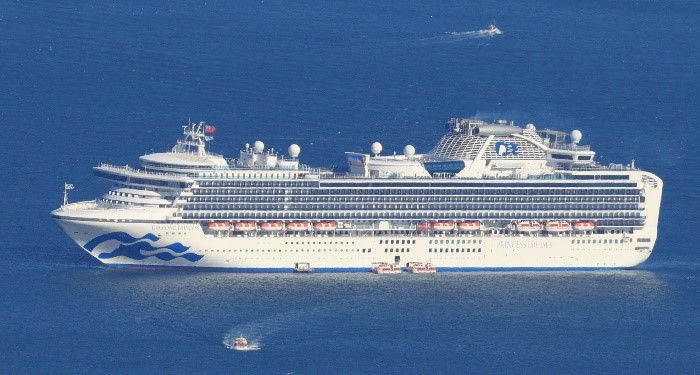 The following table from the US both sums up one expert’s view of the disease dynamics and plays that out into nationwide outcomes. 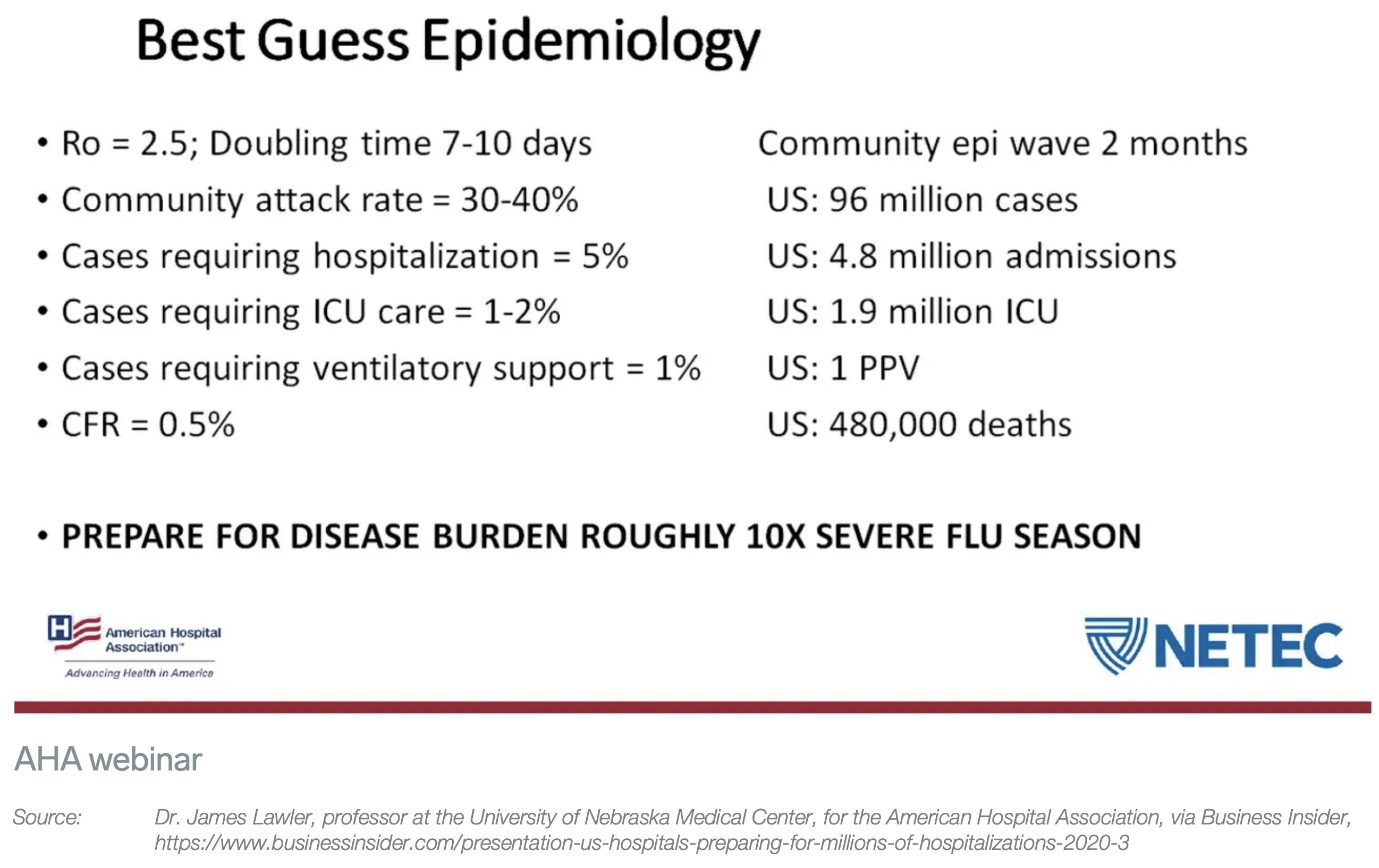 With 7.5% of the US population, and assuming our experience matches this view of best guess US experience, it would mean that, in Australia, once the first wave of the epidemic gets properly underway we might anticipate:

A good summary thanks Alex. Can I ask your reasoning why the CFR will come down? I can see for some countries that it might come down as they have been slow to diagnose cases, but why would it come down for countries like China and South Korea where the number of new cases has plateaued?

Thanks Alex for a useful summary.
I found the attached article by Tomas Pueyo very interesting:
https://medium.com/@tomaspueyo/coronavirus-the-hammer-and-the-dance-be9337092b56
It learns from the experience in China, S Korea and Singapore and recommends an intense period of suppression (Hammer) to get R0 below 1 followed by a longer period (Dance) to keep R0 below 1. Objective being to keep the numbers manageable and to buy time.
It stresses the importance of mass testing, contact tracing, enforced quarantine etc, as well as social measures.
Some of the numbers are illustrative, but the overall message seemed sensible to me.
Do you know if the Institute is forming a policy view on this?