Dr. Joëlle Gergis (Australian National University), a leading scientist and writer on climate change, spoke to her key findings on her research into the links between natural climate variability and climate change in Australia.

Opening with a reference to Dorothy McKellar’s well-known poem on our “Sunburnt Country”, she laid out an overview of climate variability throughout Australian history. Dr. Gergis’ research had used historical records, both scientific weather and narrative records, to re-construct a picture of climate records back over 200 years as far as 1791, which gave a significantly longer understanding of climate history. 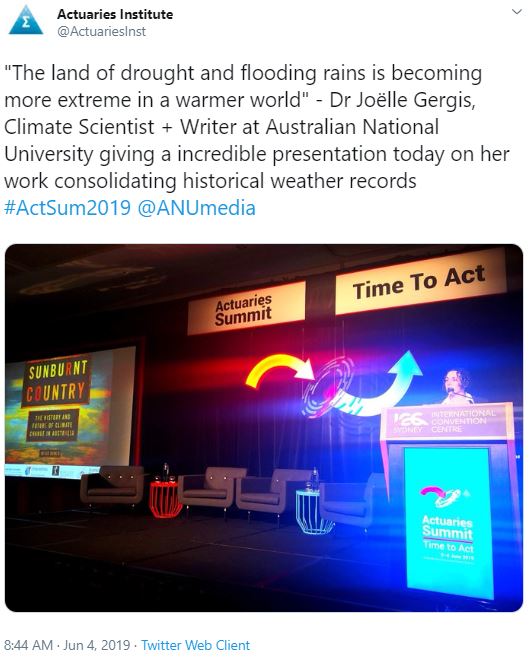 The example of recorded deaths of flying foxes in extreme heatwaves was an evocative and recently re-occurred example.  Biological and geological paleo-climate information was also used to extend the climate record further back in time, and Dr Gergis was the leader of this effort. From this expanded picture of history versus modern climate records, the record clearly shows that the latest 30 years are the warmest and this warming could be linked back to human actions.

The factual data that she presented clearly laid out the risks raised by recent weather-related events, contrasting Black Saturday bushfire event with a “Black Thursday” event over 100 years earlier. 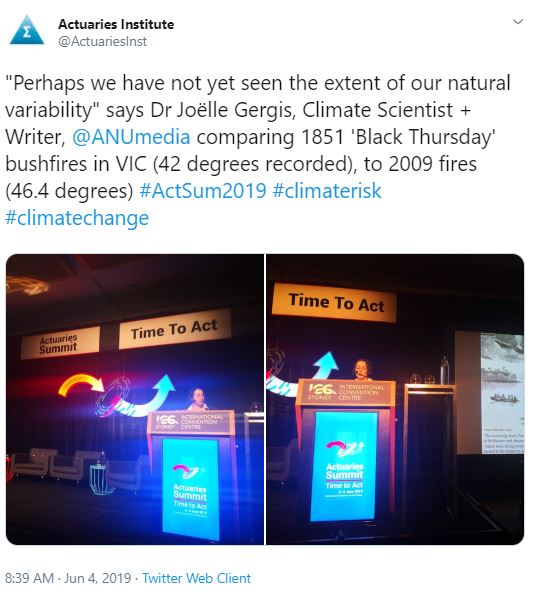 With future climate warming of average 4 degrees Celsius expected by 2100 under the “no action” scenario, she set out for us the extreme bushfire, drought and environmental damage that would be expected under this scenario. Given the average 1 degree Celsius increase in temperature since Dorothy McKellar wrote her poem, she stated, “all of our natural climate variability is occurring on the background of a warming climate”. 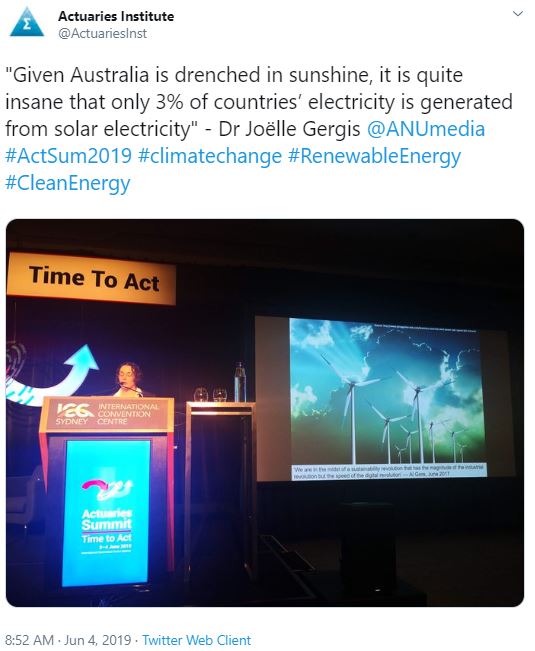 Dr Gergis also described compounding extremes, such as extreme drought followed by extreme flood, and the human impact of these.  50% of the Great Barrier Reef is dead, due to 2016 and 2017 back-to-back bleaching events, and research shows the increasing probability of such events under climate warming scenarios. Australia is the most vulnerable nation in the developed world to climate change.  And she left the audience with her call to arms to face up to climate change:

“The next generation is demanding better leadership”. 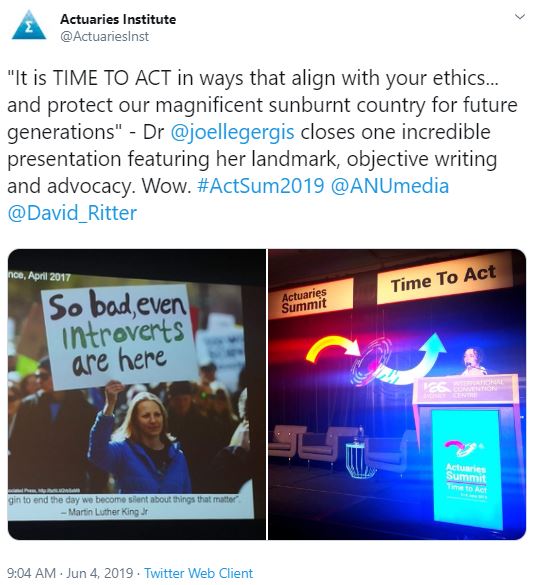 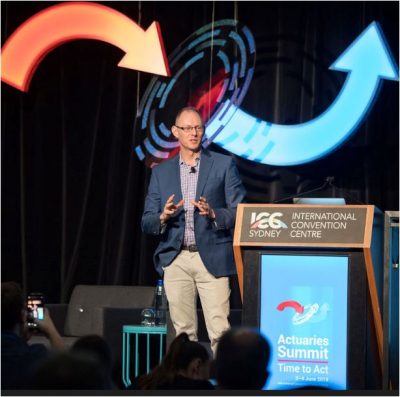 David Ritter, CEO of Greenpeace Australia-Pacific, shared his view of the civil and social impact of climate change, by asking the audience to close our eyes and summon our earliest vision of nature.  In an emotional plea to use our heads and hearts together, he reiterated that “nobody is coming to save us, there is no planet B and no secret potion… we all need to play our part.”  He clearly laid out for us the path to action via “three Ps”:

And implored actuaries to contribute to the debate. 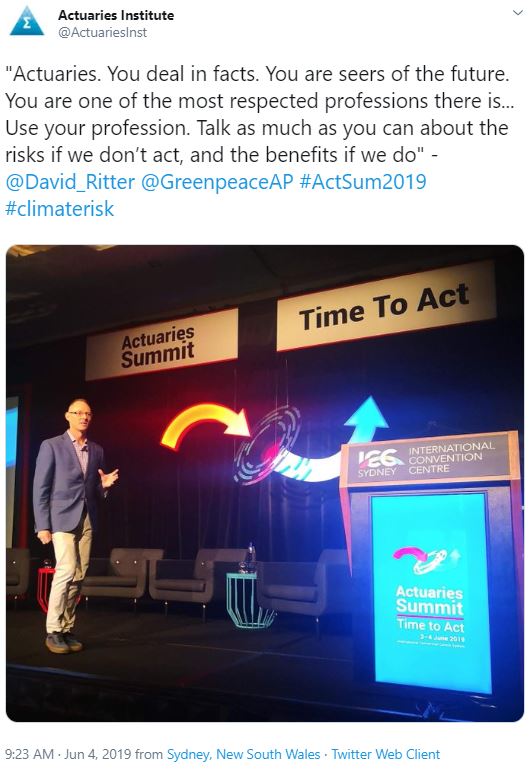 While Tim Andrews of Finity had a difficult role to follow those two passionate and expert speakers, he bravely stepped up to the task and succeeded.  He spoke to the conference about the numbers and measurement aspects of climate change (a bit more into our comfort zone). His honesty about the potential fears around dealing with such risks and uncertainty made it real for the audience. 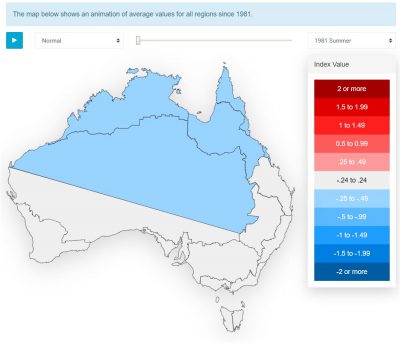 The Australian Actuaries Climate Index was a helpful example to show the type of well-informed analysis that actuaries can add to the debate.  Measuring the cost of disasters, the new requirements for climate risk disclosures and estimating the future average annual cost to general insurance businesses are other practical ways for actuaries to contribute. 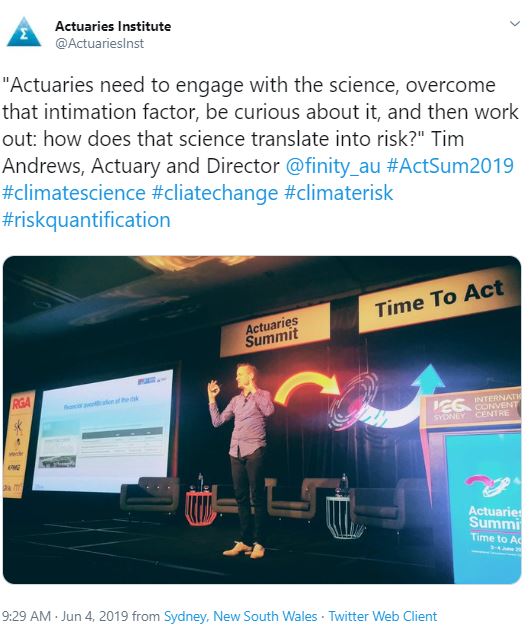 Affordability of insurance is another vital issue that actuaries can help tackle.

“We are very well placed to help with such analysis…  Climate change is something we can really get involved with.” Tim finished with his own personal pathway to contribute to climate change action in a distinctly actuarial way. 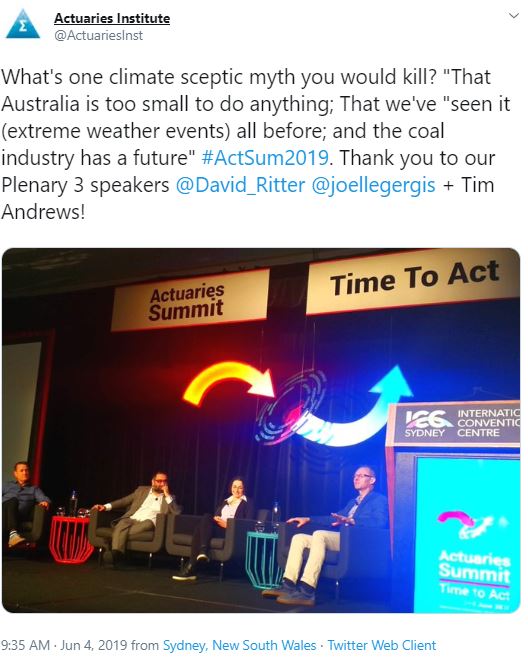 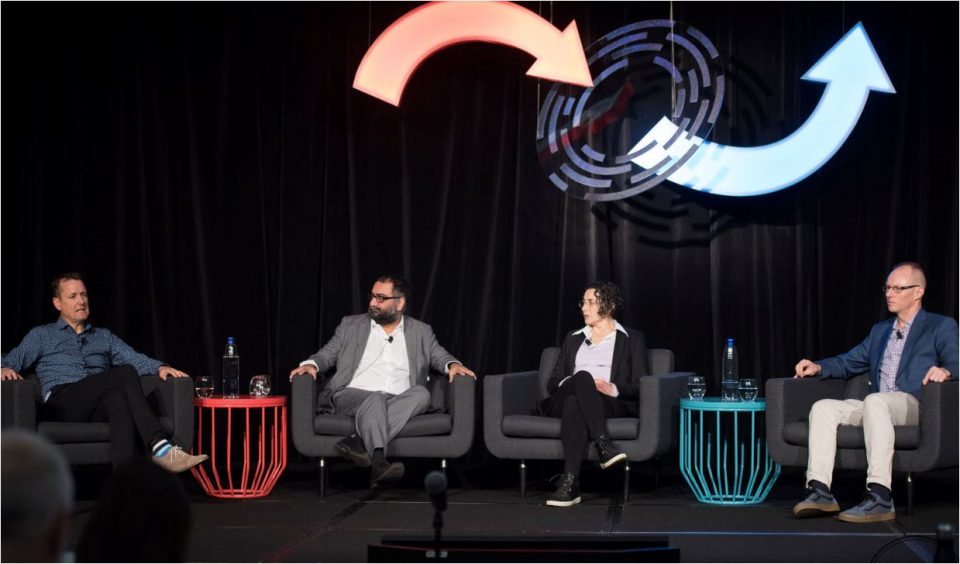 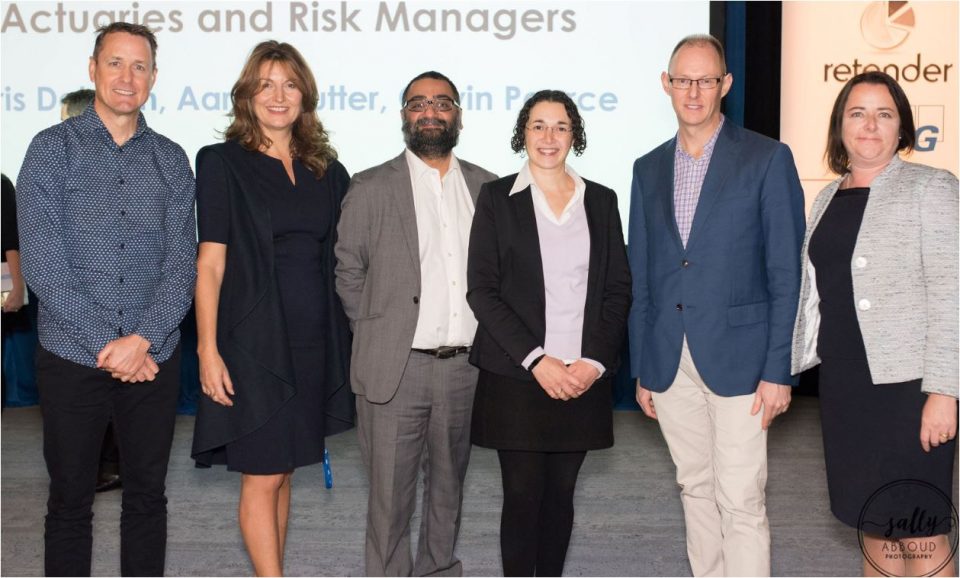 Tim speaking at the launch of the Index at the 2018 General Insurance Seminar:

Alison Drill is a Fellow of the Actuaries Institute of Australia, a Member of the American Academy of Actuaries and a charterholder of the CFA Institute. Alison works for Swiss Reinsurance Company Ltd and is Head of P&C Structured Solutions Asia. Her areas of expertise include non-traditional P&C reinsurance solutions and optimisation of reinsurance programs. She has particular interest in parametric re/insurance products and carbon related insurance products.

Towards a smarter default Account-Based Pension