Stochastic asset modelling involves the projection of financial variables for various purposes, including pension plan projections as well as financial planning. Although much of the technical debate about such modelling has been settled, a continuing issue remains how to make such modelling more accessible to laypersons. This article provides an alternative modelling approach to these projections, which relies on readily available historical data rather than bespoke internal models supported by large quantitative teams. The approach is named ‘historical random start’ (HRS) modelling for reasons explained below.

HRS modelling is an approach to asset-liability modelling and scenario testing utilising historical data by:

The HRS approach is similar to, but different from bootstrapping, in that series of data are employed as simulations directly rather than utilised for parameterisation of a model which subsequently produces simulated paths for scenario testing. As Sweeting[i] explains:

“In stochastic modelling the first distinction is between bootstrapping and forward-looking approaches. For bootstrapping, all that is needed is a set of historical data for the asset classes being modelled. … The main advantage of bootstrapping is that the underlying characteristics of the data and linkages between data series are captured without having to resort to parameterisation.”

In addition to this advantage, HRS modelling also captures the historical time series autocorrelation of each financial variable. The majority of these relationships are retained under historical random start modelling apart from the points where the sequence is joined; the effect of this joining is reduced with increased length of sequence applied. This reflects the more cyclical view of investment experience provided by the HRS modelling approach compared to the traditional stochastic modelling approach.

HRS modelling has four major advantages over pure stochastic modelling, particularly where projections are required without significant resources for the development of models or distribution fitting. These advantages avoid criticisms of other stochastic models as being overly subjective and perhaps limited to the modeler’s pre-formed views or overly simple and failing to capture the “true” behavior of the relevant financial variables.

The example involves a 40-year projection of the retirement balance of an Australian individual with four years of past plan membership and retiring in 40 years’ time. The retirement balance is expressed as a multiple of final salary assuming the member invested in a “balanced” portfolio throughout their career. The historical random start modelling process in this instance utilises a 44-year sequence ending 31 December 2017 with 200 historical random start simulations. This results in the following average results for the shares, bonds, wage inflation and price inflation financial variables as well as for the balanced investment portfolio:

The distribution of outcomes for the retiree’s retirement balance as a multiple of final salary can be seen below. 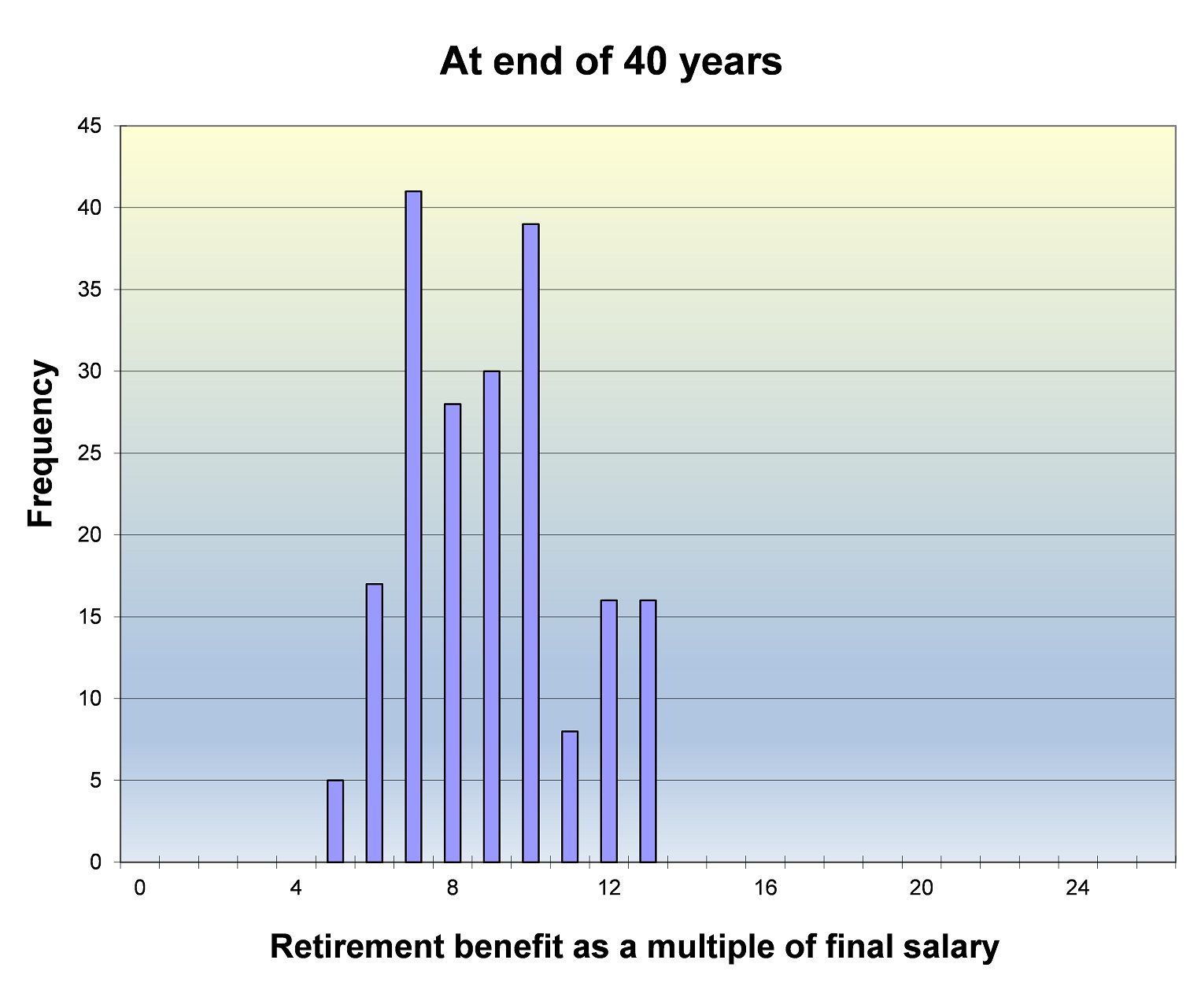 A ‘snail trail’ of the first eight scenarios is also shown to indicate how the calculated benefit multiple might rise and fall from year to year. 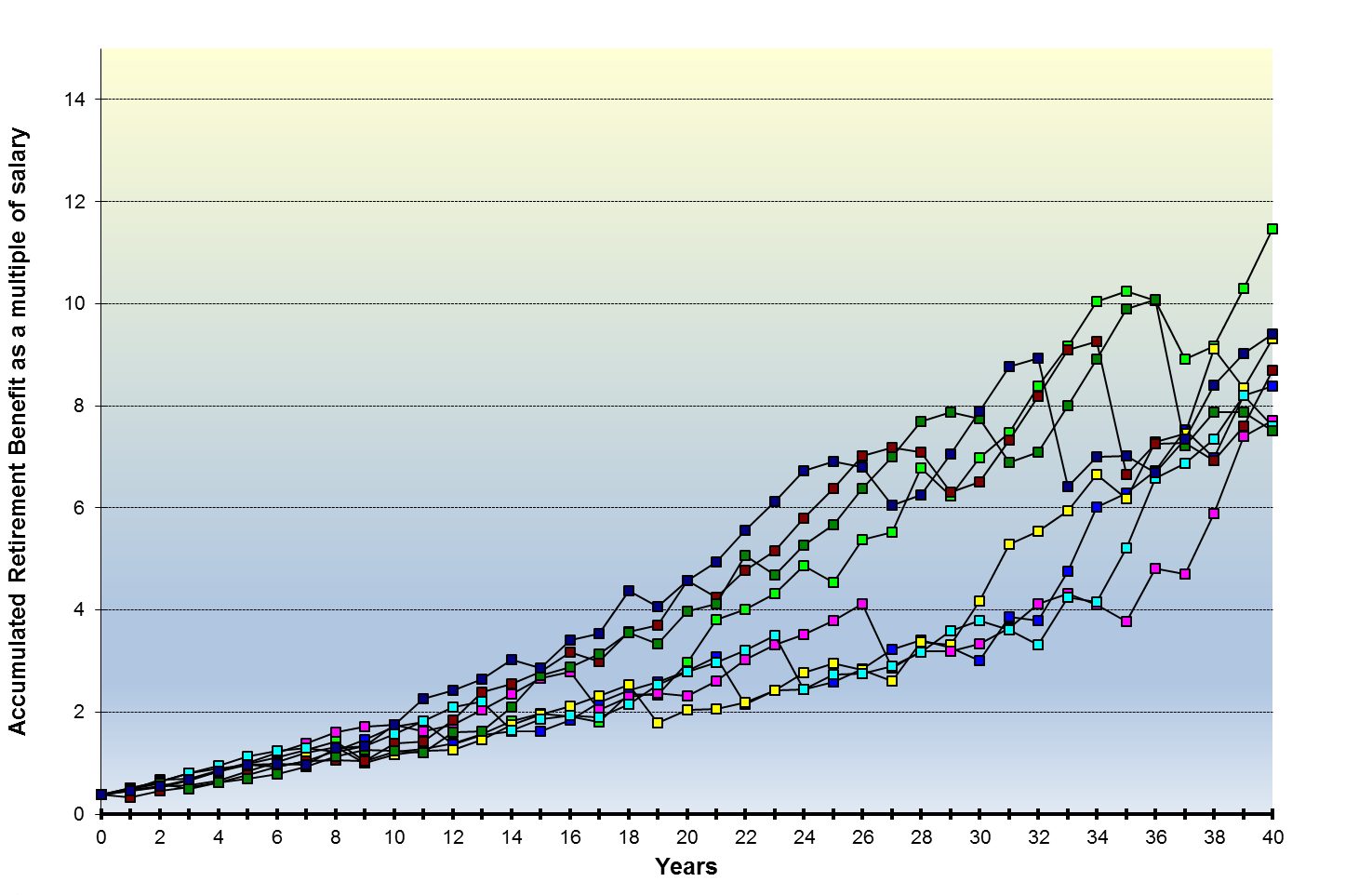 By contrast, stochastic asset modelling output is provided below for the same simulation exercise. This output is derived from application of the Austmod stochastic asset model which projects financial variable behaviour as a set[iii] of auto-correlated and rank cross-correlated normal distributions which are then transformed to reflect assumed standard skewness and kurtosis. The statistical output for the shares, bonds, wage inflation and price inflation variables and the balanced portfolio are again provided below:

As for the HRS modelling, the distribution of 40-year retirement balance outcomes is provided below together with a ‘snail trail’ of the first eight scenarios: 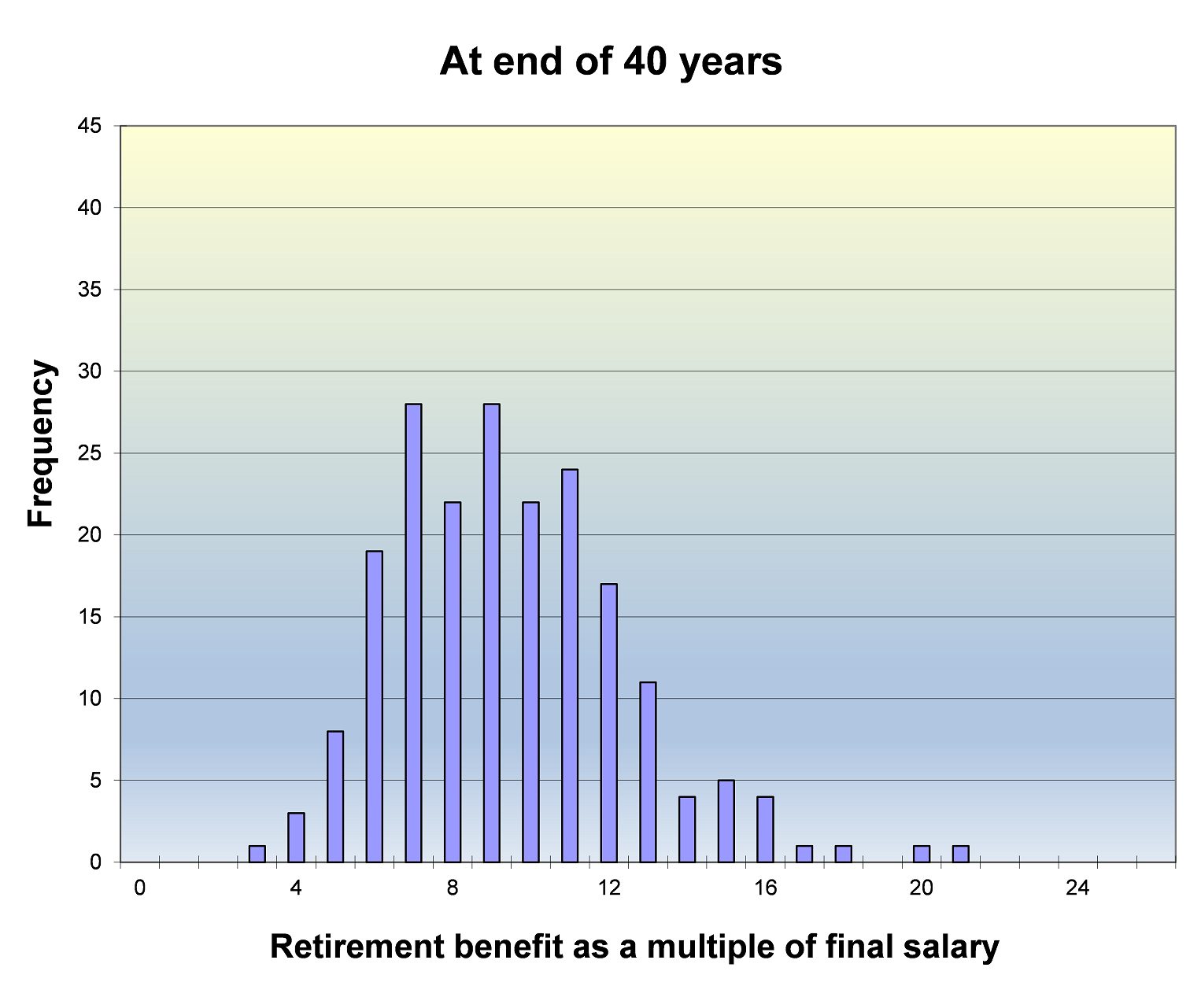 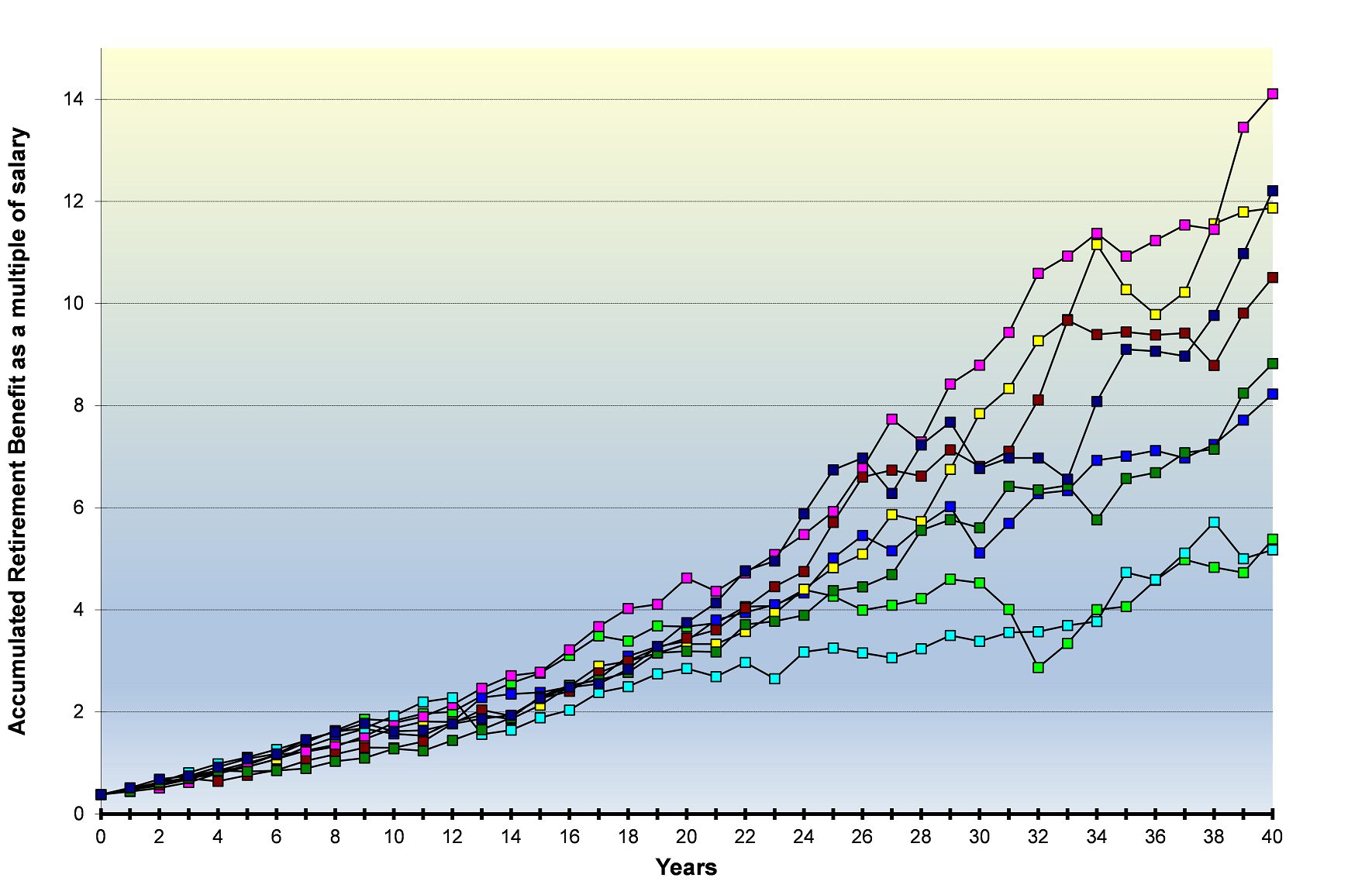 It can be seen from a comparison of the HRS modelling and Austmod stochastic modelling that the results are quite similar in terms of correlations and the Sharpe ratios (mean divided by standard deviation) of the displayed financial variables. The means are slightly different due to the HRS sequences reflecting the chosen historical period whereas the stochastic model output means are primarily determined by the setting of most Austmod assumptions being based on a continuation of economic conditions for two years from the endpoint of the underlying dataset and a long-term average price inflation of 2.5%pa. However, because this example is based on multiples of salary (or had it been based on wage-adjusted discounted values) the projection results are not misleading.

Overall, it is obvious from this output that despite its lower technical rigour and attendant reduced need for modelling knowledge, the HRS modelling approach provides fairly similar results to an established stochastic asset model whilst retaining the advantageous qualities of ease of explanation and transparency of approach.

The historical random start modelling approach can often be considered a valid alternative to stochastic asset modelling – for example when it is challenging to develop internal estimates of future market performance or where technical resources for model development are limited.  HRS modelling can serve as a sensitivity/stress test compared to existing models. Its output is more easily explainable and understood since it merely replicates past economic behaviour.

However, this approach should be approached with suitable understanding of its limitations, in that it is data intensive (requiring a dataset preferably in excess of the projection period desired) and like all modelling approaches is subject to misapplication risk.  Also, the period chosen from which the data is drawn may not be reflective of the future. For these reasons, such modelling is more suitable in the context of fairly simple projections or where technical knowledge or resources are limited. As long as the user bears in mind these caveats in employing the method, historical random start modelling can be a valuable tool in making the process of performing financial projections much easier.

Thomas joined Willis Towers Watson in Melbourne as an Actuarial Analyst in 2016 primarily providing advice to superannuation trustees and corporate clients to assist them in providing for their members’ retirement income support needs. Thomas recently transferred to Willis Towers Watson’s Reigate office in the United Kingdom, performing an equivalent role. In the Melbourne office, he was a member of the Retirement Solutions team, performing retirement income projections and estimates as well as software development for retirement income product and strategy solutions. Tom spent four years with the CSIRO-Monash Superannuation Research Cluster prior to joining Willis Towers Watson, and was secretary of the Actuaries Institute’s Superannuation Projection and Disclosure sub-committee prior to his recent move to Reigate. Tom holds a Master of Actuarial Studies and a Bachelor of Law with Honours.

How can actuaries play a role to build a more resilient future for Australia? Part 2

What’s our role in a varied Asian market?